We’ve got a few minor moves to pass along from today:

Hilliard, Zylstra, and Kirkwood were all set to be restricted free agents before getting these one-year extensions, and they now won’t need to be tendered offers. Cracraft was an exclusive rights free agent so there wasn’t much of a question about his future. Hilliard did pretty well for himself to get $1.25MM with $200K guaranteed, considering he only appeared in two games for Houston without receiving a carry or reception.

The Panthers have designated cornerback Eli Apple and wide receiver Keith Kirkwood to return from injured reserve, according to Joe Person of The Athletic (on Twitter). The club now has a three-week window to activate either player. If they are not activated in that span, they’ll be ineligible to return for the remainder of the year.

A former Giants first-round pick, Apple inked a one-year deal with the Panthers in May. At the time, he was thought to be on track for a starting role, especially since the Panthers waited until the fourth round before addressing their need at corner.

Without James Bradberry to lead the way, the Panthers weren’t left with much. Pro Football Focus graded none of Carolina’s incumbent corners higher than 89th at the position last season. Apple, meanwhile, was only 20 when he was drafted and he only just turned 25 over the summer, so there’s reason to believe that he can be a quality contributor when healthy.

The Saints have designated wide receiver Keith Kirkwood to return from injured reserve, according to Katherine Terrell of ESPN.com (Twitter link). 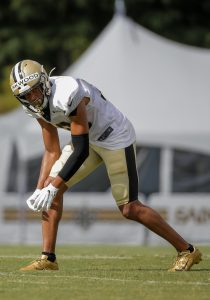 Kirkwood, 25, suffered a hamstring injury in mid-September that knocked him to the sideline. He’s now returned to practice, opening a 21-day window during which New Orleans must either activate Kirkwood to its 53-man roster or leave him on IR for the remainder of the year.

A 2018 undrafted free agent out of Temple, Kirkwood spent the first half of his rookie campaign on the Saints’ practice squad before being promoted. He went on to play 44% of New Orleans’ remaining offensive snaps, posting 13 receptions for 209 yards and two touchdowns in the process.

The Saints’ wide receiver corps has mostly been a one-man show thus far in 2019 — Michael Thomas leads the club with 86 receptions, while Ted Ginn is second among wideouts with just 20. Kirkwood should factor in as back-of-the-roster depth while also playing on special teams.