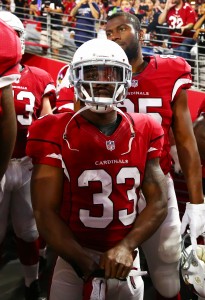 The Bucs are signing running back Kerwynn Williams, according to Ian Rapoport of NFL.com (on Twitter). Williams, who was released by the Lions last week, offers familiarity with head coach Bruce Arians and offensive coordinator Byron Leftwich from their time together with the Cardinals. 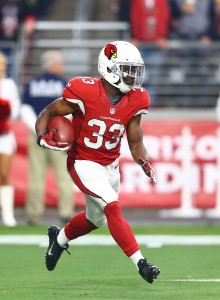 In Arizona, Williams saw a decent amount of work as a reserve and even started in a handful of games in 2017, his final season with the team. All in all, he averaged 4.5 yards per carry, though the ’17 season was the only campaign in which he cracked 100 attempts on the year.

In other Bucs news, defensive end Jason Pierre-Paul was recently involved in a car accident. Fortunately, JPP was not seriously injured in the crash.

The Chiefs have agreed to sign free agent running back Kerwynn Williams to a one-year deal, according to Ian Rapoport of NFL.com (Twitter link).

Kansas City has now made two under-the-radar additions to its backfield this offseason, as the club also signed former Dolphins running back Damien Williams. Kareem Hunt will still handle the bulk of the Chiefs’ carries after leading the league with 1,327 rushing yards during his rookie season in 2017, but the team is accruing depth behind the former third-round pick. In addition to Kerwynn and Damien Williams, Kansas City also boasts Charcandrick West, Akeem Hunt, and a rehabbing Spencer Ware.

Kerwynn Williams should be able to fill a variety of roles for the Chiefs, and will compete to be Hunt’s direct backup. In 2017, Williams saw the most playing time of his career while filling in for David Johnson in Arizona, as he managed 120 carries for 426 yards and one touchdown. He also added 10 receptions for 93 yards in the passing game.

In addition to contributing on offense, Williams can also help out on special teams. The 26-year-old returned 16 kickoffs for the Cardinals last year, averaging 20.4 yards per return. A year prior, Williams played on nearly 50% of Arizona’s special teams snaps.

The Chiefs are bringing in free-agent running back Kerwynn Williams for a visit, according to Ian Rapoport of NFL.com (on Twitter). Williams started in six games for the Cardinals last season as part of the replacement contingent for David Johnson.

It was the most starts for Williams in his five-year career. He posted a career-best 426 yards rushing last season and averaged 3.6 yards per carry. The Colts originally took Williams in the seventh round of the 2013 draft out of Utah State and he also spent time with the Chargers before signing with the Cardinals in 2014.

If signed, Williams would mark the second addition to the Chiefs backfield this offseason through free agency. They signed Damien Williams to a one-year, $1.5MM deal in late March.

Both would likely back up Kareem Hunt, who had a breakout rookie season for the Chiefs after being taken in the third round of last year’s draft and rushed for 1,327 yards and eight touchdowns. The team also has Spencer Ware, Charcandrick West and Akeem Hunt on the roster. The Chiefs also re-signed De’Anthony Thomas to a one-year $880K deal. t

The Chiefs signed wide receiver Sammy Watkins to a three-year deal as well to serve as another weapon for second-year quarterback Patrick Mahomes.

Harrison Smith underwent ankle surgery in February but is expected to be ready for training camp. The Vikings‘ top defensive back is ahead of schedule in his recovery from the left ankle operation, per Chris Tomasson of the St. Paul Pioneer Press, but the team is expected to be cautious with him this offseason. A high ankle sprain hampered Smith toward the end of last season, and although the Pro Bowl defender returned for the Vikings’ final two games after missing two in December, a corrective procedure became necessary. A source informed Tomasson that Smith opted for surgery after playing on the injured ankle in the Pro Bowl led to it “getting worse.” Smith will enter the first season of his five-year, $51.25MM contract in 2017.