Another former first-round pick is getting cut loose. The Giants gave receiver Corey Coleman the axe today to make room for some of their waiver claims, the team announced.

Coleman has had a tough time in the pros since the Browns drafted him 15th overall in 2016. Injuries and clashes with the coaching staff caused Coleman to fall out of favor in Cleveland, and he was dealt to Buffalo after just two seasons. The Bills quickly cut him, and after spending some time on New England’s practice squad he found a home in New York.

He spent the back half of 2018 as the Giants’ kick returner, and was looking to compete for a real receiving role in camp last year. Unfortunately he went down with a torn ACL and missed the entire 2019 campaign. He made the initial 53 this time around but that lasted only about a day.

Giants beat reporters were pretty surprised by this move, as Coleman had been expected to be the kick returner yet again. Still only 26 Coleman figures to be a prime candidate for the practice squad, but his draft status no longer carries too much weight and he’s running out of chances.

Giants To Bring Back Corey Coleman

Despite their transition to a new coaching staff and Corey Coleman having missed all of last season due to injury, the Giants are re-signing the former first-round pick. They will retain Coleman to a one-year deal, Jordan Raanan of ESPN.com tweets.

Coleman missed all of last season due to a summer ACL tear. He will now make another attempt to contribute in New York. The former No. 15 overall pick has not fared well since his initial weeks in the NFL in 2016. Coleman caught just five passes in eight Giants games in 2018.

Set to turn 26 in July, Coleman has enjoyed a modicum of stability with the Giants after being discarded by a few AFC teams in the months prior. Shortly after Coleman displayed an extensive sneaker collection on 2018’s Hard Knocks installment, the Browns traded him to the Bills. Buffalo then waived him. The Patriots cut him from their practice squad in the fall of 2018. Coleman then rose from the Giants’ P-squad to their active roster.

Despite this latest Giants agreement, Coleman is nearly out of chances in the NFL. The first receiver taken in the 2016 draft has 61 receptions for 789 yards and five touchdowns in his career. He will be no higher than fourth on a Giants depth chart that houses Sterling Shepard, Golden Tate and Darius Slayton.

More bad news for the Giants. On the same day that Sterling Shepard suffered a fractured thumb, fellow wide receiver Corey Coleman went down with a torn ACL, according to a team announcement.

Coleman, of course, will be unable to play this season. The Giants will soon place him on injured reserve, making it all official.

Coleman technically returned to the Giants on a one-year, $720K deal this offseason, though it was some creative accounting. As a former first round pick, his ’19 salary was already guaranteed, so the Browns are paying the remainder of his $2.025MM paycheck.

This was, potentially, going to be a big year for Coleman. The Giants also tacked on $1.7MM in incentives to his new deal and there was quiet belief that he could break out after the departure of Odell Beckham Jr.

Without Coleman, there will be even more pressure on Golden Tate to perform. Ditto for Shepard, though his Week 1 status is presently uncertain.

Giants To Use Jabrill Peppers In Return Game?

New Giants safety Jabrill Peppers, whom the Browns selected in the first round of the 2017 draft, is still highly-regarded in NFL front offices. Peppers, of course, was a key part of the trade that sent Odell Beckham to Cleveland, and Browns GM John Dorsey was loathe to let him go, while Giants GM Dave Gettleman was adamant that the former Michigan star be included in the deal. 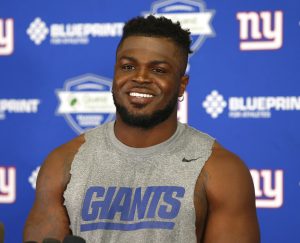 We have already heard that Big Blue envisions a versatile role for Peppers. Although the club sees him as a classic strong safety, Peppers will not line up in the same position from snap to snap and will be asked to line up deep, up near the line, at slot cornerback, and at nickel linebacker. And, as Ryan Dunleavy of NJ.com writes, the Giants had their starting safeties on the field for almost all of the team’s defensive snaps last year, so Peppers — who didn’t play more than 76% of the defensive snaps in either of his two seasons with the Browns — could be looking at a healthy increase in playing time.

But will that increase carry over to special teams? Dunleavy observes that the Giants’ return game was a mess last season, and Peppers could help in a big way. He was a quality return man with the Wolverines, and while he has not been as electric in that regard at the professional level, he has been at least serviceable. New York’s coaching staff thinks he can thrive as a returner if he continues to get the opportunity.

It remains to be seen whether Peppers’ heavier workload on the defensive side of the ball will force the Giants to keep him on the sidelines when they send out the special teams units. But Dunleavy expects Peppers to be the primary punt returner and to flank Corey Coleman on kickoff returns (Dunleavy believes Coleman will remain the team’s No. 1 kickoff returner given the stability he brought to that role last season).

If Peppers does need a breather, the club also has the sure-handed Golden Tate and rookie Darius Slayton at its disposal.

With minicamps having concluded, we are now in NFL’s true offseason. However, teams use this downtime to size up their rosters and determine which, if any, moves need to be made. Here is how some of the East franchises’ rosters look going into the break: