Jake Butt is calling it career. The Bears placed the veteran tight end on the reserve-retired list today (via Aaron Wilson on Twitter). 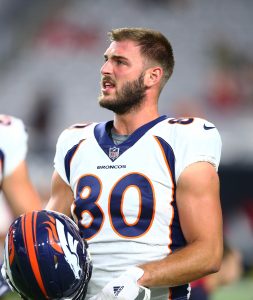 Butt had a standout collegiate career at Michigan, earning a first-team All-American nod and a pair of first-team All-Big Ten honors. However, he also suffered a pair of torn ACLs during his time in college, and that led to him sliding to the fifth round of the 2017 draft.

Unfortunately for the tight end, it was more of the same in the NFL. Thanks mostly to continued injuries, the six-foot-six target was limited to only eight games in four seasons. After returning from his college ACL tear in 2018, Butt sustained another torn ACL, ending that season prematurely. Complications from his injury forced him to sit out the 2019 campaign, and his 2020 season was cut short thanks to a hamstring injury.

In total, the 25-year-old finished his career having hauled in 10 receptions for 90 yards in eight games (four starts). Five of those games came in 2020, with Butt appearing in 11-percent of Denver’s offensive snaps.

It was only last month that the 26-year-old caught on with the Bears. The organization may have had an inkling that this decision was coming; the team signed tight end Jesse James earlier this week. The new addition will join a depth chart that also includes Jimmy Graham, Cole Kmet, and fellow newcomers J.P. Holtz.

The Bears have invited some well-known guests to their minicamp. They are working out five players — including tight end Jake Butt, cornerback E.J. Gaines and defensive tackle Mike Pennel — at their three-day mandatory session, Brad Biggs of the Chicago Tribune tweets.

This marks Butt’s second known workout of the offseason. The Michigan alum auditioned for the Cardinals recently. Although Butt starred for the Wolverines not that long ago, he has battled rampant injury trouble as a pro. The former Broncos draftee now has three career ACL tears, two coming in Denver, and has played in just eight games in four seasons.

Mixed signals have come out of Chicago regarding the team’s interest in adding a veteran cornerback. The Bears were believed to be interested in Bashaud Breeland, but he signed with the Vikings, and had Steven Nelson on the radar. But new DC Sean Desai also expressed confidence in his in-house cover men. Gaines has 38 career starts but has not played in a game since the 2018 season. The former Rams draftee opted out in 2020.

The Bears are also working out two players who recently participated in The Spring League — tight end Sal Cannella and Tyrone Wheatley Jr. The team lists Wheatley as an offensive lineman, though the second-generation NFL hopeful played tight end at Michigan — as one of Butt’s backups — and Stony Brook. Chicago’s minicamp is scheduled to run through Thursday.

Jake Butt could be switching conferences. The veteran tight end worked out for the Cardinals this week, according to ESPN’s Field Yates (via Twitter).

Butt’s plight is well known. Since suffering a torn ACL during the 2016 Orange Bowl, the Michigan product hasn’t been able to stay healthy. The Broncos still selected the tight end in the fifth round of the 2017 draft, but the six-foot-six target has been limited to only eight games in four seasons.

After returning from his ACL tear in 2018, Butt sustained another torn ACL, ending that season prematurely. Complications from his injury forced him to sit out the 2019 campaign, and his 2020 season was cut short thanks to a hamstring injury.

In total, the 25-year-old has hauled in 10 receptions for 90 yards in eight games (four starts). Five of those games came this past season, with Butt appearing in 11-percent of Denver’s offensive snaps.

The Cardinals have a crowded tight end depth chart at the moment. Maxx Williams and Darrell Daniels are projected to lead the depth chart in 2021, but Butt could compete with the likes of Ian Bunting, Cary Angeline, Ross Travis, and Bruno Labelle for leftover snaps.

The Broncos have placed quarterback Drew Lock, tight end Jake Butt, and running back Theo Riddick on injured reserve, per a team announcement. All three will be eligible to return to game action after eight weeks, but the Broncos can only activate up to two players from IR, not the whole trio.

The moves will clear the way for three signings: linebackers Keishawn Bierria and Corey Nelson and cornerback Davontae Harris. Bierria and Nelson (see story here) will receive one-year deals while Harris gets a two-year pact.

If all three players return to full health, and Joe Flacco plays well, Butt and Riddick could be the leaders in the clubhouse for the Broncos’ IR-DTR spots.

Broncos TE Jake Butt just can’t seem to catch a break. The Michigan product, who looked destined to be a first- or second-round draft pick in 2017 before a torn ACL suffered in his final collegiate game caused him to fall to the fifth round, is trying to battle back from another torn ACL, which came during a walkthrough practice last September. 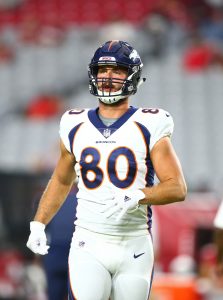 He looked to be making progress in that regard, as he made it back to 11-on-11 drills earlier this month and played in the Broncos’ preseason game against the Rams on Saturday. Butt even indicated that he had “turned the corner.”

But head coach Vic Fangio said today that Butt has been shut down again and will not play in Thursday’s preseason finale due to renewed problems in his knee (h/t Josh Alper of Pro Football Talk). Fangio said Butt could miss some time, and it seems that the 24-year-old may be IR-bound once again.

If Denver wants to put Butt on IR but retain the option of bringing him back at some point this season, he will need to be on the team’s initial 53-man roster before being placed on IR. We will know soon if the Broncos want to go that route.

Denver invested a first-round pick in raw but talented tight end Noah Fant this year, and Butt’s time with the Broncos may be running out. He played in three games (all starts) last year, posting eight receptions for 85 yards. That represents his only regular season action to date.