The Raiders are planning to release J.J. Nelson, but this is not to make room for Zay Jones. The team will retain its seven-wideout roster arrangement, with Field Yates of ESPN.com reporting (via Twitter) the team is bringing back recently cut pass catcher Marcell Ateman. 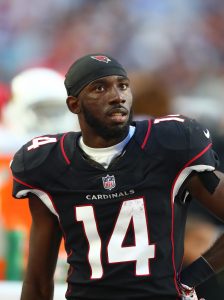 Oakland signed Nelson this offseason but has not seen much from the former Arizona deep threat. A vested veteran who will become a free agent, Nelson played in just two games and has four receptions for 36 yards this season. Nelson did score a touchdown in Week 3 against the Vikings, but he’s battled a leg injury in recent weeks.

Ateman went unclaimed on waivers earlier this week. The 2018 seventh-round pick played 28 snaps in the Raiders’ win over the Bears in London. He will return to a Raiders receiver room that still houses Tyrell Williams, Hunter Renfrow, Keelan Doss, Dwayne Harris, Trevor Davis and Jones.

Nelson signed a one-year, $1MM deal as a free agent. He has not been especially productive since Bruce Arians’ departure from Arizona, having totaled 100 yards since the start of the 2018 season.