Redskins’ Geron Christian Out For Year

Redskins tackle Geron Christian tore his MCL and is out for the season, head coach Jay Gruden announced. Thanks to injuries, the third-round rookie dressed for only two games in his first pro campaign. 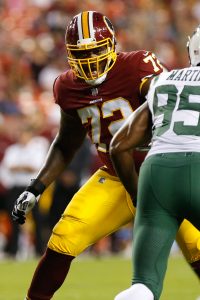 The Redskins’ offensive line has taken a beating this year. Recently, the team was also forced to shut down guards Brandon Scherff and Shawn Lauvao for the season and star tackle Trent Williams is at least a couple of weeks away from returning after a thumb injury. The Redskins will use new addition Austin Howard at offensive tackle, but another signing could be on the way as they look to strengthen the front five.

Despite their setbacks, the Redskins lead the NFC East with a 6-3 record. Fresh off of a road victory over the Bucs, they’ll look for another W against the Texans on Sunday.

Neither Daniel Snyder nor Redskins president Bruce Allen knew about the team’s decision to bring Adrian Peterson in for a workout. Instead, VP of player personnel Doug Williams and football operations president Eric Shaffer moved forward with the audition that quickly led to Peterson signing and then reclaiming an NFL starting gig.

“(Shaffer) looked and me and said, ‘Well, what do you think, what do we got to lose?’” Williams said during a radio interview with the Team 980’s Doc Walker (via the Washington Post). “I’m a little hesitant to pull the plug, and then before I went out to practice I looked at Eric and said, ‘Hey Eric, what the heck? Let’s do it.’

“The thing about that, I came to practice, I was so hyped about it that I forgot to tell Bruce that we was bringing him in. I’m sitting there that evening and Bruce came in my office and he just stood there looking at me. I’m thinking, ‘What’d I do?’ Well, Dan had called him and let him know he didn’t know. And Bruce let me know that he didn’t know because Dan didn’t know. I said, ‘Well look, that’s on me.’ I took it. Sometimes you have to have big shoulders, you take it and you move on.”

Williams arranged the workout for Monday, at a time when the Redskins were searching for available backs, and Peterson signed for the veteran minimum later that day. Peterson is thriving with Washington, his fourth NFL team; his 236 yards are fourth among players who’ve played just three games. He scored twice and rushed for a season-high 120 yards (6.3 per carry) in the Redskins’ 31-17 Week 3 win over the Packers.

Here’s the latest out of the nation’s capital: 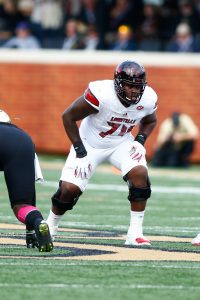 The Louisville product was selected with the No. 74 overall pick. Per the terms of his slot, he’ll earn roughly $3.4MM over the course of his four-year rookie deal.

Christian made a name for himself as one of Lamar Jackson’s most trusted protectors in college. At the pro level, he’ll be utilized as a tackle on both sides.

Here’s the complete rundown of the Redskins’ 2018 draft class: