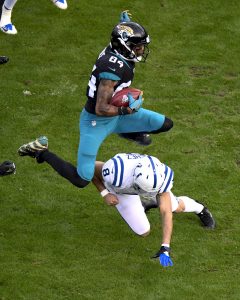 The pact is worth $5.5MM, Schefter writes. It’s a nice payday for a player who went undrafted out of D2 school Kentucky Wesleyan. The move comes just a few days after the Jets gave a big contract to Corey Davis as they look to upgrade last year’s underwhelming receiving group. With Davis, Jamison Crowder, second-year player Denzel Mims and now Cole, the Jets will have a respectable corp in 2021.

Cole signed with Jacksonville as an UDFA in 2017, and turned into a nice diamond in the rough find. He came out of nowhere as a rookie to play in all 16 games and rack up 748 yards. He never eclipsed that total again as other Jags young players moved up the depth chart, but he’s coming off a solid 2020 season.

In 16 games and five starts, he turned 55 receptions into 642 yards and five touchdowns. Not bad for a player the Jets will be counting on to be a third or fourth option. Cole has never missed a game during his pro career, and the Jags thought highly enough of him to give him a second-round tender last offseason as a RFA. He’ll turn 28 next month.

The Jaguars have applied the second-round tender to wide receiver Keelan Cole, as Ian Rapoport of NFL.com tweets. Cole was set for restricted free agency and the Jaguars hope that the tender level will ward off suitors.

In his three pro seasons with the Jaguars, Cole has hauled in 104 catches for 1,600 yards and seven touchdowns. Teams will have interest in him, of course, but they’ll also have to think long and hard about the total price tag. If a team signs Cole to an offer sheet and the Jaguars do not match it, they’ll have to cough up a second-round pick. Given the abundance of quality receivers in this year’s draft, it seems likely that those clubs would take a pass.

Cole signed with the Jags as an undrafted free agent back in 2017. He played his college ball at a tiny D2 school Kentucky Wesleyan, and has turned into a nice success story. He only made $645K last year as part of his rookie UDFA deal, so this will be a pretty nice pay-bump for him as the second-round tender is slated to clock in at a little over $3.1MM for 2020.

The tender is somewhat surprising considering Cole’s production has actually declined a bit each year. He had 748 yards as a rookie, 491 as a sophomore, and 361 this past year. His role did increase down the stretch this past season, but he still figures to be behind at least DJ Chark, Dede Westbrook, and Chris Conley on the depth chart next year.

Broncos cornerback Aqib Talib wants to finish his career with the Broncos, but he also knows that a return might not be in the cards.

“If I wasn’t [returning], it wouldn’t be the most surprising thing in the world,” Talib said on Denver’s Altitude 950 (transcription via Nicki Jhabvala of The Denver Post). “You have three corners making big money and that’s rare to have. I had conversations with our staff during our exit meetings and stuff, so it’s kind of up in the air. But I wouldn’t be surprised if I’m still here. Just put it like this: I had good conversations with [head coach] Vance [Joseph], with [defensive coordinator] Joe Woods. I mean, things change. But there’s a chance I will be back.”

Talib, 31, has two years left on the five-year deal he signed with the Broncos in 2014. He’s slated to carry a cap hit of $12MM in 2018, but the team can release him and carry just $1MM in dead money. If Talib wants to stay in Denver, he’ll probably have to take a pay cut to make it happen. The Broncos can’t afford to squander any of their cap room, particularly with Bradley Roby’s salary increasing from ~$1MM to $8.5MM next season.