It’s been a busy offseason for Derek Carr. The Raiders quarterback moved his family to Las Vegas, and the 29-year-old recently announced that his wife is pregnant. Despite those major life changes and the limitations of a virtual offseason, Carr believes that he and his teammate are entirely focused on football.

“I feel like we’re really working hard, I feel like we’re getting a lot done,” Carr said during an appearance on NFL Network (via Kyle Martin of the team’s website). “We’ve got some young guys, some new guys that are going to play big roles for us. So, I feel like this has been really good for us, this is the best we can do right now.”

Carr also reacted to the news that Allegiant Stadium in Las Vegas will host the 2021 Pro Bowl.

“I’ve been to three Pro Bowls, it’s blessing, it’s cool, but I’m trying to do some other things,” Carr said. “I’m trying to play in the Super Bowl, I’m trying to win the Super Bowl. The Pro Bowl is fun and all that stuff, it’s exciting and I think it’s great for the community, I think it’s a great thing for fans to see some of their favorite players up close and personal, and not just on Twitter or Instagram. You know me, I’ve got different plans this year.”

The last of Reggie McKenzie‘s first-round picks still with the Raiders, Karl Joseph is not signed beyond this season. And the Oakland safety starter is in danger of missing the rest of 2019. 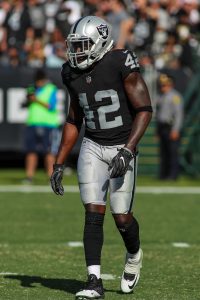 Joseph’s injury prompted the Raiders to sign D.J. Swearinger, and Jerry McDonald of the East Bay Times notes this is a “substantial” foot problem that may cause the fourth-year starter to miss the rest of the season. Spotted on crutches shortly after his interception sealed the Raiders’ second win in five days, Joseph at the very least looks likely to miss extensive time.

Although the Raiders have not used him as a consistent starter throughout his career, the 2016 No. 14 overall pick has started every game this year and has logged 41 starts in his career. The Raiders passed on Joseph’s fifth-year option in May, making him a 2020 free agent-to-be. Joseph has graded as Pro Football Focus’ No. 31 safety through nine games. His 48 tackles are second among Raiders this season.

The Raiders added Swearinger to a safety mix that includes Erik Harris, Curtis Riley, second-year UDFA Dallin Leavitt and UFA addition Lamarcus Joyner. However, Joyner has played plenty of slot corner this season and suffered an injury Thursday night himself. The ex-Rams defender endured a non-contact hamstring injury, and McDonald notes he is uncertain to face the Bengals in Week 11.

The 49ers weren’t the only team to miss out on Le’Veon Bell. Vic Tafur of The Athletic writes that the Raiders made an offer to the star running back, and “there was some real buzz in the building” yesterday.

The reporter also notes that the Raiders thought they could land Bell if “money wasn’t the most important thing,” as the running back reportedly preferred to play for the Raiders. After missing out on Bell, the team also took a run at Mark Ingram, who ended up landing in Baltimore.

Bell ultimately agreed to a four-year, $52.5MM deal with the Jets, forcing the Raiders to look elsewhere for a running back. At the moment, the team is rostering three backs in DeAndre Washington, Chris Warren, and James Butler.

Let’s check out some more notes out of Oakland…

Lamarcus Joyner is heading to the Raiders. The team is expected to sign the former Rams safety, reports NFL.com’s Ian Rapoport (via Twitter). ESPN’s Paul Gutierrez tweets that the deal is expected to pay Joyner around $10.5MM per season. 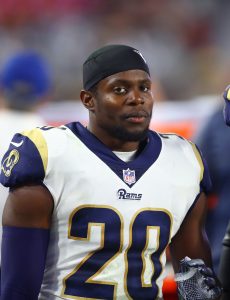 The 2014 second-rounder had spent his entire career with the Rams organization, and he continued to take on a bigger role with the team throughout his five-year tenure. Joyner started a (then) career-high 12 games in 2017, finishing with 49 tackles, nine passes defended, and three picks. This led to the Rams slapping him with the franchise tag, and the safety proceeded to play the 2018 season on a one-year, $11.28MM deal.

Joyner earned his worth last season, compiling 78 tackles, one sack, three passes defended, and one interception in 15 games. The 28-year-old also appeared in all three playoff games for Los Angeles, and he had six tackles in the Rams’ Super Bowl loss. Pro Football Focus was particularly bullish of his 2018 performance, ranking him 29th among 93 eligible safeties.

The Raiders have been busy over the past two days. After trading for Antonio Brown and trading away guard Kelechi Osemele to the Jets yesterday, the team opened free agency by signing offensive tackle Trent Brown and re-signing defensive tackle Johnathan Hankins.

The Rams have a number of high-profile players scheduled for free agency this offseason and it sounds like they’ll allow most of them to test the waters. “There’s a good possibility” the Rams will permit defensive tackle Ndamukong Suh, safety Lamarcus Joyner, and edge rusher Dante Fowler to reach the open market before discussing new deals with them, GM Les Snead says (Twitter link via Dave Birkett of the Detroit Free Press). Snead also said the team is unlikely to use the franchise tag (Twitter link via ESPN.com’s Lindsay Thiry). 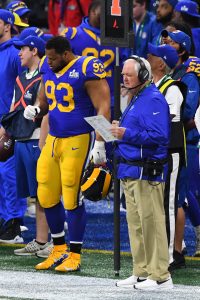 Suh joined the Rams on a one-year, $14MM deal last year after he was cut loose by the Dolphins. The durable lineman turned in another 16-game season for L.A. and racked up 59 tackles with 4.5 sacks. He was also a disruptive force in the first two games of the postseason, tallying four QB hits in the first two games. He wasn’t quite as effective in the Super Bowl, but then again, most of the Rams’ stars underwhelmed in the championship game.

The Jaguars more or less gave up on Fowler when they shipped him to the Rams in October. Since then, he’s shown flashes of promise and the 24-year-old (25 in August) should draw interest from clubs looking for help around the edge. Fowler had four sacks for L.A. and Jacksonville combined, just half of his 2017 total.

The next time Todd Gurley plays for the Rams, some type of NFC playoff logo will be featured on the field. The Rams declared Gurley out for Week 17. 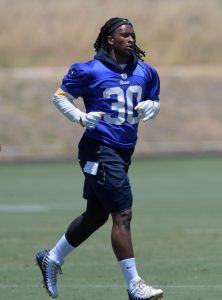 Gurley has been dealing with knee inflammation and was a late scratch in Week 16. The Rams are not guaranteed a bye but can clinch the NFC’s No. 2 seed with a win over the 49ers or a Bears loss to the Vikings.

Sean McVay said (via The Athletic’s Vincent Bonsignore, on Twitter) he is not concerned about Gurley’s availability in January but wants to be smart about the return of his All-Pro running back. Gurley suffered the knee injury late in the Rams’ loss to the Eagles nearly two weeks ago. Sitting in the team’s regular-season finale was rumored all week. Now, C.J. Anderson will have another chance to audition for potential free agent bidders.

Gurley’s season will wrap up with 1,831 yards from scrimmage and a career-high 21 touchdowns. He’s been the centerpiece of McVay’s second Rams offense and obviously is key to the team qualifying for its first Super Bowl since the 2001 season. The 24-year-old back signed a market-setting extension to stay with the Rams long-term at the beginning of the season, and a second All-Pro honor will likely come his way soon.

Lamarcus Joyner will also be shelved in Week 17. The safety suffered an ankle injury against the Cardinals.