Mason Crosby will not hit free agency. The Packers are bringing their longtime kicker back on another extension, according to agent Mike McCartney (on Twitter). 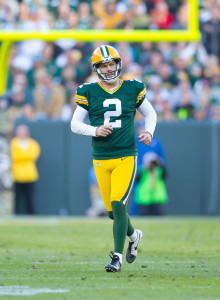 The sides agreed to a three-year deal, tethering Crosby to the Packers through the 2022 season. This will be the 35-year-old kicker’s 14th season with Green Bay. The three-year pact is worth $12.9MM, a source told Tom Pelissero of NFL Network (Twitter link). He’ll get $6MM in year one of the deal and $9.5MM through the first two. As Pelissero points out, that makes Crosby the NFL’s third-highest paid kicker.

Crosby, who made $3.2MM in base salary last season, is by far the longest-tenured kicker in Packers history. He’s played in 208 games with the franchise — 64 more than the next-closest Packer kicker. Crosby passed Donald Driver last season for the No. 2 spot among games played as a Packer, now trailing only Brett Favre (255).

Last season marked his most accurate as a pro, with the veteran specialist connecting on 91% of his field goal attempts. Crosby made connected on fewer than 82% of his field goal tries in 2017 and ’18, with the latter season marred by a rough day in Detroit when he went 1-for-5. Crosby missed just two field goals in all of 2019, also making 40 of 41 extra point attempts. For his career, however, Crosby’s 81% make rate ranks just 46th all time — behind 21 of his active peers.

The Packers still have Bryan Bulaga and Blake Martinez looming as free agents, but they have locked down their second-longest-tenured player. While Crosby is not the NFL’s oldest active kicker, he has been in his current post longer than all but two kickers — Adam Vinatieri in Indianapolis and Stephen Gostkowski in New England. Both players began their respective runs with their current team in 2006; the Packers used a sixth-round pick on Crosby a year later.

Mason Crosby‘s five misses cost the Packers a win on Sunday, but it doesn’t sound like they’ll be making a kicking change. On Monday, head coach Mike McCarthy indicated that the club isn’t exploring outside options to replace the 34-year-old.

Crosby missed four of five field goal attempts in the Packers’ 31-23 loss to the Lions. He also missed an extra point in the second half of an uncharacteristically poor performance.

Crosby has been with the Packers since 2007 and the club has stuck by him through trying times before. In some games, it seemed like Crosby couldn’t hit the broad side of a barn, but the Packers retained him despite a league-low 63.6% conversion rate. Their faith in him was rewarded as he nailed 85% of his attempts from 2013-2017.

“I think he’s one of the greatest kickers of all time,” Packers quarterback Aaron Rodgers said of Crosby. “I’ve always said he and Robbie Gould, what they do in the elements over the years is some of the finest kicking that I’ve seen in my time. Obviously he’s disappointed. I don’t think he expected this. We have a ton of faith in him. He’s done it for a long time, made some big kicks for us over the years. They’ve got to clean the operation up: snap, hold and he’s got to make them.”

SATURDAY, 8:45am: Tom Silverstein of the Milwaukee Journal Sentinel has several more details on the deal. Crosby will be paid $6.15MM in 2016, and his salary cap number will be worth $2.4MM.

The contract contains escalators that could increase the value over the final three years, and the kicker will have $1.25MM worth of prorated signing bonus as cap obligation for each year of the contract. This means if the team wanted to cut him following the 2016 season, they’d have to “absorb” $3.75MM into their cap. If they wanted to cut him a year later, they’d be responsible for $2.5MM.

WEDNESDAY, 1:34pm: The Packers have officially announced their new deal with Crosby in a press release.

5:47pm: Although the Packers decided to not slap kicker Mason Crosby with the franchise tag, there was still a belief that the long-time Green Bay standout would return to the franchise. Those sentiments proved to be accurate, as Crosby’s agent, Mike McCartney, announced on Twitter that the kicker has signed a four-year contract with the Packers.

This was presumably the ideal route for the organization, as the franchise tag would have required the team to pay Crosby $4.5MM for 2016. Our own Luke Adams wrote that Crosby would likely secure a lower annual value if he signed an extension, although he should expect more overall guaranteed money.

The 31-year-old has spent the entirety of his nine-year career with the Packers, and he’s coming off one of the best seasons of his career. Crosby finished with career-highs in field goal percentage (85.7 percent) and efficiency from 50-plus yards (80 percent). The veteran kicker was also perfect on extra points, improving his career average to 99.1-percent. The former sixth-round pick has yet to miss a game during his career.

The fate of defensive end Olivier Vernon will shape how the Dolphins approach their offseason, writes Adam H. Beasley of the Miami Herald. The Dolphins have until Tuesday at 4 p.m. ET to place the franchise tag ($15.7MM) or transition tag ($12.7MM) on Vernon. But doing either of those things would make it especially difficult for them to keep fellow pass rusher Cameron Wake and running back Lamar Miller, which they want to do. If he hits the open market, Vernon could end up with a long-term deal in the range of $12MM to $14MM annually, per Beasley, who adds there’s an outside possibility Miami will slap the franchise tag on the 25-year-old and then trade him.

The Packers have been engaged in “regular talks” with agent Mike McCartney, the rep for Mason Crosby, according to Rob Demovsky of ESPN.com, who reports that the team expects to get a deal done with its kicker without using the franchise tag.

Crosby, 31, has been kicking for the Packers since the 2007 season, making 79.7% of hie field goals over the course of those nine seasons. He has been even better in recent years, making at least 85% of his kicks in three of his last five seasons. In 2015, he converted 24 of 28 field goal tries (85.7%), and didn’t miss any longer extra-point attempts.

The Packers don’t have any position players who look like viable candidates for the franchise or transition tag, so it makes sense that Crosby would be the only real option. If Green Bay did franchise him, it would probably cost the team in excess of $4.5MM for 2016 — a high price for a kicker, but not exorbitant for a one-year deal.

Based on Demovsky’s report, though, it sounds as if the Packers are optimistic they’ll work out a longer-term agreement with Crosby. If they get something done, the per-year salary will likely be more modest, but the total guarantee could match or exceed that $4.5MM+ franchise-tag amount.

In other Packers news, Demovsky writes that Brian Murphy, B.J. Raji‘s agent, said he met with Packers chief negotiator Russ Ball this week about a new deal for his client — nothing is imminent at this point, but there’s mutual interest between the two sides.

The Lions and Bears each formally announced additions to their coaching staff today, with Detroit naming a new quarterbacks coach and Chicago confirming a new wide receivers coach.

As previously reported, the Lions’ new QBs coach is Brian Callahan, who spent the last six seasons with the Broncos, and has previously worked with Detroit offensive coordinator Jim Bob Cooter. In 2015, Callahan was an offensive assistant in Denver, playing a part in coaching the club’s QBs.

As for the Bears, their new wide receivers coach is Curtis Johnson, who had been Tulane’s head coach for the past four seasons after serving as the WRs coach for the Saints from 2006 to 2011. Joining Johnson in Chicago is Ben McDaniels, whose hiring was also reported last Friday. Josh McDaniels‘ brother officially joins the Bears as an offensive assistant.