The 49ers have lost another starter to injury for the season, placing Torrey Smith on IR, Nick Wagoner of ESPN.com reports. This increases the team’s total on the injured list to 17, with nine of those having been starters. 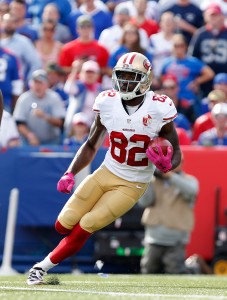 Going into mid-December, Smith had never missed a game in his six years as an NFLer. The former Ravens second-round pick had played in 92 consecutive regular-season games to start his career, with that total climbing to an even 100 when counting his appearances during Baltimore’s playoff runs in 2011, 2012 and 2014. But a concussion suffered during Week 14 will shelve the 49ers’ highest-paid receiver for this season’s remainder.

He will finish with his worst statistical season as a pro, having hauled in 20 passes for 267 yards and three touchdowns in 12 starts. Smith’s previous low (663 yards) came with the 2015 49ers after he signed a five-year deal last March. The 49ers’ quarterback situation helped render Smith ineffective, and the 27-year-old target was the subject of trade discussion before the November deadline. The 49ers discussed a Smith trade to the Eagles but ended up retaining him.

Three years remain on Smith’s contract, with the cap-rich team saving $4.8MM by cutting him in the offseason but also incurring $4.8MM in dead money by doing so at that juncture. He stands to count $9.6MM against San Francisco’s cap the next three seasons.

As the 49ers seek their second win of the year, they’ll have to do it without the services of three of their players. Wide receiver Quinton Patton, linebacker Nick Bellore, and tight end Blake Bell will all be shut down for the year, as Matt Maiocco of CSNBayArea.com writes. 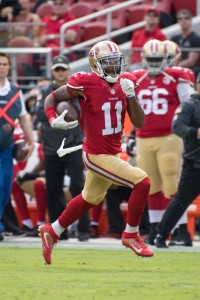 Patton (foot) and Bellore (elbow) both went down early on in Sunday’s embarrassing 41-13 loss to the Falcons. Bell, meanwhile, suffered a shoulder injury after being tackled on a 45-yard pass play in the second quarter. In addition to those three, Maiocco notes that cornerback Jimmie Ward (shoulder), center Marcus Martin (ankle), and nose tackle Glenn Dorsey (undisclosed) also sustained injuries yesterday and their status for Weeks 16 and 17 are not yet known.

The 49ers could fill some of these roster spots from within, if they choose. Wide receiver DeAndre Smelter and linebacker Wynton McManis could be candidates for promotion from the practice squad, Matt Barrows of The Sacramento Bee tweets.