After having lost wideout Keenan Allen for the season, the Chargers are actively seeking receivers. According to ESPN.com’s Adam Caplan (via Twitter), the team brought in wide receivers Chris Givens and Griff Whalen for a workout today. 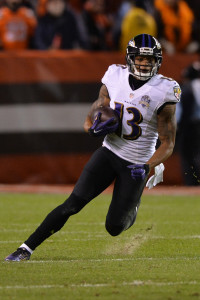 Givens, 26, briefly caught on with the Eagles this offseason, but the veteran failed to make the opening day roster. The former fourth-rounder played for the Ravens and the Rams in 2015, catching 20 passes for 353 yards and one touchdown. His best season came during his rookie campaign in 2012, when he hauled in 42 catches for 698 yards and three touchdowns.

Whalen, 26, spent the offseason with the Dolphins but was ultimately cut by the team. The former undrafted free agent out of Stanford spent his first four NFL seasons with the Colts, where he appeared in 34 games. Whalen finished 2015 with 19 catches for 205 yards and one touchdown.

As Roster Resource shows, the Chargers are currently counting on Tyrell Williams, Travis Benjamin, Dontrelle Inman, and Isaiah Burse to replace some of Allen’s production. Of course, that’s easier said than done. Allen has struggled through injuries over the past year, but he still managed to catch at least 65 passes in his three previous NFL seasons.

The Eagles have announced a series of roster moves today, and the most surprising transaction is the release of wide receiver Rueben Randle, who was signed to a one-year deal over the offseason. Randle, who is still only 25 years old, was thought to be a clear starter for Philadelphia after averaging 56 receptions, 782 yards, and six touchdowns over the past three seasons with the Giants.

But after the Eagles acquired Dorial Green-Beckham, Randle’s roster spot became tenuous, especially given his lackluster performance during the preseason. Philadelphia handed Randle $500K in guarantees plus a $25K roster bonus, so the club will incur $525K in dead money. Because he’s a vested veteran, Randle will not have to clear waivers and will become a free agent immediately.

The Eagles also made the following transactions:

3:11pm: Givens’ one-year pact with the Eagles is worth $760K, tweets Mike Garafolo of FOX Sports. That’s the minimum salary for a player with Givens’ NFL experience.

1:21pm: The Eagles have added a wide receiver to their roster, announcing today (via Twitter) that they’ve agreed to terms on a one-year deal for veteran free agent Chris Givens. After previously visiting the Jets, Givens had been in Philadelphia today to meet with the Eagles.

A Rams fourth-round pick in 2012, Givens previously caught passes from Sam Bradford in St. Louis, and will now reunite with Bradford in Philadelphia. The 26-year-old’s best season came in his rookie campaign, when he caught 42 balls for 698 yards and three touchdowns. In subsequent years, Givens saw his role reduced, until he was ultimately traded by the Rams to Baltimore last October.

For the Ravens, Givens appeared in 12 games, starting six. While he was targeted 53 times by Baltimore quarterbacks, Givens managed to haul in just 19 of those passes for 346 yards and a touchdown.

The Eagles, who released Riley Cooper earlier this offseason will add Givens to a wide receiving corps that includes Jordan Matthews, Nelson Agholor, and Josh Huff, among others. All three of those players have been day one or day two picks in the last two drafts, but that doesn’t necessarily mean that Philadelphia won’t target the position again in this spring’s draft.

Jason Cole of Bleacher Report (on Twitter) opines that Russell Okung needs to shoot for a short-term contract with a lot of incentives. The veteran tackle, who is representing himself, saw his field of suitors go from four to three on Tuesday when the Steelers signed Ryan Harris. Now, Okung’s market is likely down to the Seahawks, Lions, and Giants, and that could hurt his bottom line when all is said and done.

5:20pm: Givens did not fetch much in this trade, with the Ravens set to send the Rams a seventh-round pick in 2018, ESPN.com’s Jamison Hensley reports (on Twitter).

9:20am: The Ravens have announced (via Twitter) that they’ve acquired Givens and placed Campanaro on the IR.

9:02am: The Ravens have acquired wide receiver Chris Givens from the Rams, reports ESPN.com’s Adam Schefter (via Twitter). Albert Breer of the NFL Network tweets that the Rams will receive a future seventh-round pick in return. St. Louis will also presumably have an open roster spot for the time being.

The Ravens finished Thursday night’s contest with only three healthy receivers, so it’s not a surprise that they were looking to add more depth at the position. The Rams inclusion in the deal isn’t a surprise either, as Brian Quick is back in the picture for the Rams. ESPN.com’s Nick Wagoner opines (via Twitter) that Givens could have been inactive going forward.

Givens, a fourth-round pick in 2012, had his best season as a rookie, compiling 42 catches for 698 yards and three touchdowns. Since then, the 25-year-old has caught 46 passes for 735 yards and one score, including only one seven-yard pass this season. While Givens returned 23 kickoffs in 2012, he’s only returned five in the past three seasons.

Regardless of the stats, the Wake Forest product will be welcomed in Baltimore. Despite reports that wideout Michael Campanaro would only be week-to-week with a herniated disk, Zrebiec tweets that the second-year player will actual be placed on the injured reserve.

Meanwhile, rookie receiver Breshad Perriman is out indefinitely following arthroscopic surgery on his PCL, while veteran Steve Smith‘s status is uncertain after he sustained a lower back contusion on Thursday.

The Steelers announced that they have signed two of their draft picks: fifth-round offensive lineman Wesley Johnson and sixth-round linebacker Jordan Zumwalt. Johnson, a 6’5″, 297 pound lineman out of Vanderbilt University, was taken with the 173rd overall pick and offers experience all over the O-line. Zumwalt, a UCLA product who stands at 6’4″ and 235 pounds, was the 192nd overall selection. He started 30 of 50 games played in his career, compiling 256 tackles (164 solo), two sacks, 22 tackles for loss, five forced fumbles, one fumble recovery, two interceptions and two blocked kicks. With the signings, Pittsburgh has now signed four of their nine selections from the 2014 NFL Draft. Here’s the rest of tonight’s minor moves..