The Dolphins have signed free agent tackle Jermon Bushrod to a one-year deal, tweets Armando Salguero of the Miami Herald. Bushrod himself broke the news, posting a photo on Instagram of himself signing his new contract. 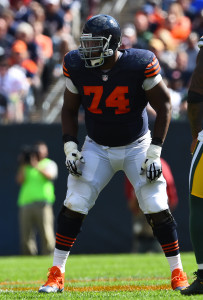 Although injuries woes limited him to 12 games (and four starts) last season, Bushrod had previously been a stalwart at left tackle for the Bears and the Saints. The former fourth-round pick started 62 games for the Saints from 2009 to 2012, earning two Pro Bowl nods. He then started 30 games for Chicago in 2013 and 2014.

The Dolphins believe Bushrod will be back to 100% health in time for training camp, according to Salguero, but given the veteran’s injury issues, it seems unlikely that the Dolphins are penciling him in as a starter. Still, Bushrod figures to push for playing time on a line that currently features tackles Branden Albert, Ja’Wuan James, and Sam Young. Both Albert and James were solid in 2015, so if they remain in the starting lineup for 2016, Bushrod will likely compete for either a starting guard job or the swing tackle role.

In other Dolphins news, the team signed another offensive lineman, guard Jacques McClendon (Twitter link). McClendon spent time in Miami in 2015, but didn’t see much action. The 28-year-old made three starts for the Jaguars in 2014. According to Salguero, the Dolphins may not make a bigger splash than McClendon on the free agent guard market, preferring to address the position in the draft.

Meanwhile, the Dolphins also confirmed (via Twitter) that they’ve officially restructured Byron Maxwell‘s contract, a move that was expected as part of the trade that sent the cornerback to Miami. Maxwell’s deal is expected to remained relatively unchanged for 2016, with alterations starting in 2017.

A pair of Dolphins linebackers will see their seasons come to an early end, with the team announcing today (via Twitter) that it has placed Koa Misi and Chris McCain on the injured reserve list. To get the roster back up to the 53-man limit, the Dolphins have signed linebacker James-Michael Johnson, center/guard Jacques McClendon, and guard Shelley Smith (Twitter link).

Misi, who turns 29 next month, is the more notable of the two Miami linebackers headed to IR, having started 13 games for the team this year. The Utah product has been with the club since being selected in the second round of the 2010 draft, starting 70 games and playing in a total of 81 contests during that stretch. Misi remains under contract with the Dolphins for two more seasons.

McCain, meanwhile, has contributed a little on both defense and special teams, recording a sack and a forced fumble for the Dolphins this season.

The new additions will help provide depth not only at linebacker, but on the offensive line, where the team has injuries mounting as well. Veteran stalwarts Mike Pouncey and Branden Albert both left Sunday’s loss to the Chargers with injuries.