Baylor defensive tackle James Lynch announced that he’ll enter the 2020 NFL Draft. Lynch may wind up as a first round pick in April with many already connecting dots between him and new Panthers head coach Matt Rhule. 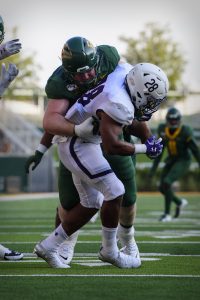 With evaluators drooling over his upside, Lynch will forgo his final year of eligibility with the Bears. ESPN’s Mel Kiper has Lynch ranked as the fifth-best defensive tackle in this year’s crop and most prognosticators see him as a Day 2 pick, at minimum.

The Panthers’ pick at No. 7 is probably too high for Lynch, but, then again, we’ve seen teams reach before. Just last year, we saw two major surprises in the Top 10 when the Raiders took Clemson’s Clelin Ferrell at No. 4 overall and again at No. 6 when the Giants grabbed Duke’s Daniel Jones. A more likely scenario, if the Panthers want to pounce on Lynch: a second round selection, move up to pick again in the back end of the first round, or a trade back from No. 7 to add more picks to their arsenal.