Ravens’ Matt Skura Ahead Of Schedule In Recovery

Center Matt Skura has made a “remarkable” recovery from his knee injury, according to Ravens head coach John Harbaugh (Twitter link via Jeff Zrebiec of The Athletic). With rave reviews for his conditioning test and other exams, Skura seems on course for the 2020 season. 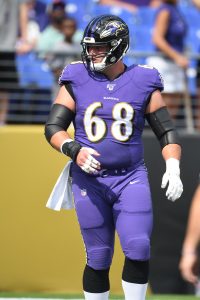 The Ravens haven’t put a timetable on Skura’s full recovery, but the hope is that he’ll be ready to go by the start of training camp. There, he’ll compete with last year’s fill-in Patrick Mekari and possibly Bradley Bozeman, if they try the guard out at center.

Skura suffered a devastating knee injury towards the end of season, rupturing his ACL, PCL, and MCL. Before that, the 27-year-old was extremely durable. In 2018, he never missed a game or even a single snap.

After Ryan Jensen‘s departure, Skura graded out as Pro Football Focus’ No. 12 ranked center in the league. Up until the injury, he was likely on course for a deal that would make him one of the league’s higher-paid centers. Now, he’ll have to duke it out for his first-string gig. The Ravens, meanwhile, will likely stand pat at the position now that Skura is back.

Ravens center Matt Skura has inked his restricted free agent tender, according to agent David Canter (on Twitter). With that, Skura will return to the club on a $2.133MM deal for 2020. 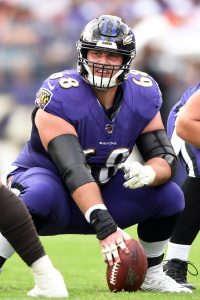 Skura suffered a devastating knee injury in the final stretch of the season, forcing him to go under the knife for tears in his ACL, PCL, and MCL. Before that, Skura was remarkably durable. The 27-year-old had perfect attendance dating back to 2018 and never even missed a snap.

The Ravens turned to Skura in 2018 after Ryan Jensen left to join the Buccaneers. In his first season in the middle, Skura graded out as Pro Football Focus’ No. 12 ranked center in the NFL. This year, it looked like he was on course for a solid multi-year pay day, up until the fateful injury in Week 12. After that, the Ravens handed things over to rookie Patrick Mekari for the last four games, plus the divisional round loss to the Titans.

Meanwhile, the Ravens’ work on the offensive line is not done. They still need more support on the interior line and GM Eric DeCosta seems open to the idea of converting one of this year’s promising rookie tackles into a guard.

The Ravens are using the low tender on center Matt Skura, as Mike Garafolo of NFL.com tweets. This will lock Skura in at a reasonable salary for the 2020 season, though they’ll receive no compensation if another team signs him as a restricted free agent and the Ravens do not match the offer.

Skura is working his way back from a major knee injury, one that capped the starter at eleven games last year. After suffering ACL, MCL and PCL tears, Skura is still a few weeks away from running, though he hopes to be a participant in training camp this summer.

Before the injury, the 27-year-old had not missed a game since taking over for Ryan Jensen when he left for the Bucs in 2018. In fact, he never missed a snap. Skura played 1,889 snaps in that ’18 season and graded out as Pro Football Focus’ No. 12 overall center. If teams feel confident in his health, he seems likely to garner lots of interest and could even find a decent chunk of guaranteed money in an offer sheet.

The Browns are once again in on a Trent Williams pursuit, but they were persistent in their efforts to acquire the Pro Bowl tackle last year. Previous GM John Dorsey called the Redskins every week about their disgruntled left tackle, according to Albert Breer of SI.com. However, the then-Bruce Allen-led front office gave Dorsey a flat no each time, per Breer. Even Baker Mayfield, like Williams an Oklahoma alum, communicated with Williams about a trade, Breer adds. Dorsey was believed to have offered a second-round pick to Washington for Williams, who ended up skipping all of last season, but the Redskins were holding out for a first. Daniel Snyder fired Allen at season’s end. Now, the Ron Rivera-run Washington front office appears willing to accept compensation less than a first-rounder for Williams. The Browns will not bring back Greg Robinson, and right tackle Chris Hubbard may be a cap-casualty candidate.

The knee injury that required Matt Skura to be carted off the Los Angeles Coliseum field Monday night will force a key adjustment for the surging Ravens. Baltimore’s starting center will miss the rest of the season, Mike Garafolo of NFL.com tweets. He will undergo surgery to repair his right knee.

Given the Ravens’ snapping reins after Ryan Jensen defected to the Buccaneers in 2018, Skura has not missed a start since changing positions last year. The Duke product began his career in 2017 as Baltimore’s right guard starter. Rookie UDFA Patrick Mekari replaced Skura during the Ravens’ 45-6 win.

Not only had Skura not missed a game since taking over for Jensen, he had not missed a snap. The 2016 UDFA had played all 1,889 snaps over the past two seasons, doing so despite the Ravens taking members of their starting offense out during a few fourth quarters this year. Pro Football Focus graded the ex-Blue Devil as this season’s No. 12 overall center. Skura is set for restricted free agency in March.

Baltimore’s offensive line has helped Lamar Jackson become the MVP frontrunner, ranking fourth in Football Outsiders’ adjusted line yards metric. The Ravens’ unorthodox offense leads the league in rushing by a staggering 65 yards. While the Ravens continued to gash the Rams without Skura, this setback will surely be a significant adjustment for the league’s hottest team.

Mike Tomlin addressed the contract status of his top running back and is hopeful that the key players being in the same room will bring about a long-awaited resolution to the Le’Veon Bell impasse. The 12th-year Steelers coach believes everyone involved in this process wants this deal finalized.

“Now it’s just about negotiators getting into a room and doing what it is they need to do,” Tomlin told WAVY-TV’s Bruce Rader (Twitter link via Jeremy Fowler of ESPN). “I’m excited and hopeful. Hopefully we’ll have some exciting news before Monday.”

Earlier Saturday, Ian Rapoport of NFL.com reported some late progress has emerged here after previously it was looking like a strong possibility existed of Bell hitting the 2019 free agent market. The deadline for franchise-tagged performers to sign extensions is 3pm CT Monday. If Bell does not reach a deal, he’s not expected to show up at the Steelers’ facility until after the preseason concludes.

Aside from the division-dominating Bell saga, here’s what’s going on in the AFC North heading into training camps: