Board is back! The Jaguars announced today that they’ve promoted wideout C.J. Board from the practice squad. The team waived cornerback Tae Hayes to make room on the roster. 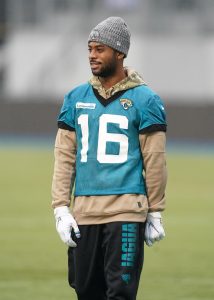 Board went undrafted out of Chattanooga back in 2017, and he’s bounced around the NFL since then, spending time with the Ravens, Titans, and Browns. He made his NFL debut earlier this season with the Jaguars, and he’s hauled in a single 23-yard catch in two games. He was on Jacksonville’s active roster for the first 12 weeks of the campaign.

The Jaguars may be in need of some receiver depth this weekend against the Raiders. DJ Chark is battling through an ankle injury, forcing him to miss practice all week. The receiver is considered doubtful for Sunday. Meanwhile, Dede Westbrook was limited at Wednesday’s practice thanks to a shoulder injury. If those two miss Sunday’s contest, that’d leave the Jaguars with only four healthy wideouts in Board, Chris Conley, Keelan Cole, and Michael Walker.

Hayes had a single appearance back in Week 9 vs. the Texans. The Appalachian State product had 11 tackles, four passes defended, and an interception during the preseason.

The Jaguars are placing wide receiver Marqise Lee on injured reserve, as Mark Long of The Associated Press tweets. The Jaguars were gearing up for Lee’s return, but his shoulder injury will sideline him for at least the next eight weeks.

It has been a frustrating couple of years for Lee, who missed the entire 2018 season with a torn ACL. Before all of that, in 2016 and 2017, he totaled 119 receptions for 1,553 receiving yards. Until his ankle – and ultimately his shoulder – did him in this year, Lee managed just three catches for 18 yards across six games.

It’s a real bummer for the Jaguars, who advanced to 4-4 with their recent win over the Bengals. The AFC South is up for grabs, but they’ll have to fight for it without Lee grabbing at passes from Gardner Minshew (or Nick Foles).

This could very well end Lee’s Jacksonville tenure. Since signing a four-year, $34MM deal, he has not been the same player. The Jags have added wideouts D.J. Chark and Chris Conley to their mix in that span. Both have become more reliable contributors. It would cost the Jags $3.5MM in dead money next year to release Lee while saving the franchise more than $5MM in cap space.

In a related move, the Jags have promoted undrafted rookie cornerback Tae Hayes from the practice squad.