Likely set to hire an outside GM for the first time in over a decade, the Vikings have taken a bit more time to send out their interview requests. But they sent out their first summons Wednesday night. 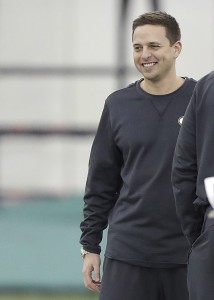 Browns vice president of player personnel Glenn Cook received a Vikes interview request, Jonathan Jones of CBS Sports tweets. Cook has landed on the radar of both the NFC North’s GM-seeking franchises, having interviewed for the Bears’ GM gig Wednesday.

In addition to Cook, the Vikings sent out requests to speak with Patriots senior consultant Eliot Wolf and fellow Browns staffer Kwesi Adofo-Mensah, Tom Pelissero of NFL.com tweets. Those two are also on Chicago’s interview list.

Previously in the Packers organization, Cook joined the Browns in 2016. Cook started in the scouting department and rose to the level of assistant pro scouting director, before climbing to his current post in 2020. The Browns were not exactly a sought-after organization for executive talent when Cook arrived, but they have seen multiple execs receive interview requests during this cycle. Both Minnesota’s other two early interview hopefuls worked in Cleveland, where longtime Vikings assistant Kevin Stefanski landed.

Prior to stays in Cleveland and New England, Wolf enjoyed a lengthy Green Bay tenure. The son of Hall of Fame GM Ron Wolf, Eliot has been in the GM mix for a few years now. Yet to rise to a GM role, Wolf interviewed for the Packer job that went to Brian Gutekunst. He also was in the mix for the Colts’ GM post in 2017. The Browns’ vice president of football operations, Adofo-Mensah spent time with the 49ers before joining the Browns in 2020. He interviewed for the Panthers’ GM position last year.

The Vikings are seeking to replace Rick Spielman, who had been with the organization since 2006. In addition to the three requests sent out, Colts VP of player personnel Ed Dodds and Chiefs director of football administration Brandt Tillis are potential candidates, ESPN.com’s Courtney Cronin tweets.

The Chiefs have promoted Mike Borgonzi to assistant GM, per a team press release. The club also elevated Brandt Tilis to Vice President of Football Operations and Ryan Poles to Executive Director of Player Personnel.

All three executives have been in the mix for GM jobs elsewhere. But, with Brett Veach installed as the Chiefs’ GM, that job won’t be available anytime soon.

The Panthers met with all three executives in this last cycle before ultimately landing on ex-Seahawks VP Scott Fitterer. It’s safe to say that they’ll garner consideration again in the 2022 cycle, but the Chiefs might be able to hang on to them for a while longer with these pay/title bumps.

Tilis has been a key cog in Chiefs contract matters since starting with them in 2010. Among his CV highlights: squeezing in extensions for Patrick Mahomes, Chris Jones, and Travis Kelce to keep one of the NFL’s strongest teams in tact. Poles, 36 in September, has served as the assistant player personnel director since May 2018.

The Panthers’ GM interview list is up to 11. Executives from four teams interviewed for the position over the past two days, with two Chiefs staffers being summoned for meetings.

Kelly has popped up in the Broncos’ search as well. The Broncos requested an interview with their former staffer, who has been with the Bears since 2015. He has served in his current role for the past two years, previously operating as Chicago’s pro scouting director. Kelly interviewed for the Jets GM job in 2019.

With the Chiefs since 2010, Tilis has been a key cog in Chiefs contract matters. Considering the offseason the defending Super Bowl champions had on this front — extending Patrick Mahomes, Chris Jones and Travis Kelce — and the franchise’s success in recent years, it makes sense a team is interested in Tilis. Poles, 35, has worked in his current position since May 2018. The Chiefs have seen multiple staffers — Chris Ballard and Brett Veach — move into GM roles in recent years, and Poles has been on GM radars for a bit now. The Panthers also have Chiefs player personnel director Mike Borgonzi on their radar.

Peters and Dodds have been with their respective teams for four years, each relocating in 2017 to join Ballard and John Lynch‘s respective staffs. Dodds has been in the GM mix for a bit now, most recently turning down a Browns interview request. For Peters, this is his first go-round of GM interviews. Peters and Matt Rhule have an interesting connection. During Rhule’s 2001 stopover at UCLA as the Bruins’ defensive line coach, Peters was on the roster as a defensive end.

Here are the rest the Panthers’ candidates thus far: