That was fast. Two days after signing Ethan Westbrooks, the 49ers have released the defensive lineman, Ian Rapoport of NFL.com tweets.

It’s not clear why the Niners have reversed course so quickly, but this sort of thing usually happens when players are flagged on their physicals. Soon, we’ll probably hear more on why the NFC champs dropped him.

Westbrooks saw a good amount of playing time for the Rams during his five seasons. In 2017, he saw snaps at multiple DL spots and notched four sacks in 16 games, which included nine starts.

Last year, Westbrooks signed an offseason deal with the Raiders but did not survive final cuts. He didn’t hook on elsewhere after that, leaving him out of football in 2019.

The Niners will turn their attention to more pressing matters on the defensive line, starting with Arik Armstead‘s impending free agency.

The 49ers have agreed to a one-year contract with veteran defensive lineman Ethan Westbrooks, according to Matt Maiocco of NBC Sports Bay Area. Westbrooks currently looks like just a depth piece for a stacked San Francisco D-line, but this offseason could spur a lot of movement along the Niners front and open up a clearer spot for their newest addition.

Westbrooks spent the first five seasons of his career with the Rams from 2014-2018. Over his time there, he appeared in 67 games (making 11 starts) and amassed 79 tackles, 26 quarterback hits, 20 tackles for loss, 9 sacks, and a 77-yard fumble recovery returned for a touchdown.

During his tenure with the Rams organization, Westbrooks did make headlines after he was arrested for suspicion of domestic violence in March of 2017. The Sacramento County District Attorney declined to press charges a week later and Westbrooks was never reprimanded by the league. He returned to the Rams in the 2018 season and there have been no other reported incidents.

While Westbrooks should not factor in as a starter for San Francisco, the team will have some tough decisions to make on their salary cap following their loss in Super Bowl LIV. Starter Arik Armstead and rotation player Ronald Blair are set for free-agency, DeForrest Buckner is due for an extension while Dee Ford and Solomon Thomas both could be traded to create more cap space. The loss of Armstead, Blair, or Ford all could cause a shuffle along the line opening up potential reps for Westbrooks.

Last season, Westbrooks was released by the Raiders in their final round of cuts and did not catch onto another team’s roster before the end of the season. However, the 49ers should have more familiarity with Westbrooks than the average organization since their director of pro personnel, Ron Carthon, worked for the Rams from 2012-2016.

Rams defensive lineman Ethan Westbrooks was arrested for possession of a stolen handgun over the weekend, ESPN.com’s Alden Gonzalez tweets. The news was first reported by the Southern California News Group. 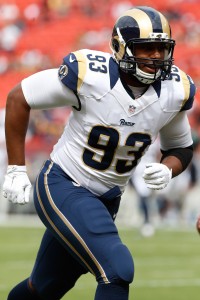 Westbrooks was pulled over for speeding on Friday night when an officer found a handgun loaded with 13 rounds of ammunition. Later, cops ran the serial number of the firearm and found that it was stolen eight years earlier. Westbrooks is now facing five felony charges related to the weapon and has an arraignment scheduled for Oct. 5.

The Rams agreed to a one-year extension with Westbrooks earlier this year, an agreement that took him from a $1.797MM salary this year to $1.25MM. In exchange for that, Westbrooks received a $1.75MM salary for the 2018 season. However, a felony conviction would put that pact in jeopardy. Even without a conviction, Westbrooks will likely be in for a suspension at the very minimum, though that may not come until the legal process has finished.

Westbrooks’ role with the Rams has slowly grown over the years ever since joining them as a UDFA in 2014. Last year, he finished out 2016 with 24 tackles, two sacks, and a fumble recovery for a touchdown. This year, he notched a sack in the season opener and played in 66 snaps (38 running, 28 passing) through three games.

The Rams and defensive lineman Ethan Westbrooks have agreed to a one-year extension, as Ian Rapoport of NFL.com tweets. The new deal calls for a pay cut from his $1.797MM salary for this year to $1.25MM. In exchange for that, Westbrooks gets a $1.75MM salary for the 2018 season.

Westbrooks signed his original-round RFA tender this offseason, which would have put him in line for unrestricted free agency in the spring. Last spring, the 26-year-old (27 in November) was arrested on suspicion of domestic violence, but the Sacramento County District Attorney chose not to file charges.

The West Texas A&M product has been with the Rams since 2014 when he entered the league as a UDFA. His role has slowly grown over the years and he even wound up starting two games last year. Westbrooks finished out 2016 with 24 tackles, two sacks, and a fumble recovery for a touchdown. On Sunday, he notched three tackles and sacked opposing quarterback Scott Tolzien in the third quarter.