The season is over for Cowboys linebacker Jabril Cox. The rookie will miss the rest of the year with a torn ACL, as Michael Gehlken of the Dallas Morning News tweets.

Cox, a fourth-round pick, began his collegiate career North Dakota State before transferring, choosing LSU over Alabama and other top-tier programs. In his lone year with the Tigers, Cox notched 58 tackles, 6.5 tackles for loss, three interceptions, one of which he returned for a touchdown.

He’s mostly played as a special teamer through the first half of his rookie campaign, but he also offers quality coverage ability for an outside linebacker. In time, his athleticism could translate to consistent pressure off of the edge. But, in the near-term, he’ll have to focus on his rehab program with an eye on 2022.

The Cowboys are 6-1 following yesterday’s win over the Vikings. Next up, a Sunday afternoon showdown with the Broncos.

Here are the 2021 draftees to sign their rookie contracts Thursday:

LSU linebacker Jabril Cox will hold a Pro Day on April 26 — just three days before this year’s draft — as his agent, Andy Ross, tweeted. Cox was unable to work out with his teammates at LSU’s Pro Day in March due to a hamstring injury. 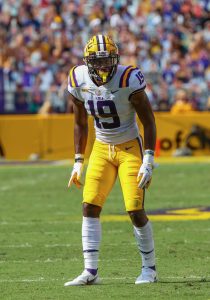 Cox is widely seen as a Day 2 talent. His biggest selling point is his versatility, which will make him attractive to any number of clubs. He can line up as an outside linebacker in either a 4-3 or a 3-4 scheme, and his rare combination of size and speed allows him to excel in coverage. He is not as polished against the run, but that coverage ability is one of the first things talent evaluators looks for when studying modern-day ‘backers. His speed and burst also give him some upside as a pass rusher.

Cox began his collegiate career with FCS powerhouse North Dakota State, and he did so well there that, when he graduated and entered the transfer portal, Alabama and LSU both went after him. In his one year with the Tigers, he tallied 58 tackles (6.5 TFL) and three interceptions, including a pick-six. The Butkus Award semifinalist is also lauded for his leadership abilities and character.

The Rams, the Washington Football Team, and the Patriots are among the clubs that could have interest.