We’ll keep track of today’s minor moves in this post, so check back later:

A Cardinals waiver claim last year, Jonathan Bullard agreed to remain with the team after a short stay in free agency. The Cardinals announced they re-signed the defensive lineman on a one-year deal.

Bullard started six games for the Cards last season, registering 22 tackles (four for loss) and 1.5 sacks. He ended the season on IR due to a hamstring injury.

The Bears cut the former third-round pick before the 2019 regular season began; the Florida product worked as a rotational player in Chicago before ascending into Arizona’s starting lineup.

The Cardinals lost Rodney Gunter to the Jaguars in free agency but signed former Bills defensive tackle Jordan Phillips. But be it in a starting or rotational role, Bullard is set to be back as a contributor for the Cardinals up front in his fifth NFL season.

This afternoon, the Bears formally announced the signing of third-round defensive lineman Jonathan Bullard. With Bullard under contract, the Bears have now signed their entire 2016 draft class. 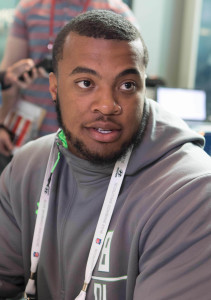 Bullard, who came out of the University of Florida, racked up 12 sacks and 33.5 tackles for a loss during his time in college. Bullard moved all around the defensive line for the Gators, but the Bears have indicated that they’ll use him as a bookend. Heading into the draft, Bullard had widespread interest from teams and, according to one report, he was in consideration for at least one first-round team.

The Bears did not have to draft Bullard in the first round to snag him, however. Instead, they moved up from No. 11 overall to No. 9 to select Georgia edge rusher Leonard Floyd. The 6-foot-4, 231-pounder was a dominant performer during his three-year tenure at Georgia, where he played both outside linebacker and defensive end, racking up 17 sacks and 26.5 tackles for loss.

Here’s a full rundown of all the players in the Bears’ 2016 draft class, all of whom are under contract: