Two days after Ezekiel Elliott and at least three other members of the Cowboys and Texans tested positive for COVID-19, a second Broncos player has done so. Safety Kareem Jackson tested positive for the coronavirus, Adam Schefter of ESPN.com tweets. 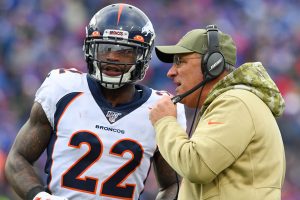 The 10-year NFL veteran began experiencing chills this week, Klis adds. Jackson is not in serious condition and is expected to make a full recovery, Schefter notes. But as the NFL and NFLPA continue to formulate a plan for how the league’s first COVID-19-era training camps will look, players continue to test positive.

Jackson was part of a Denver protest against systemic racism two weeks ago — one featuring several of his Broncos teammates — but the second-year Broncos defender told Klis his doctor informed him that based on the timing of his symptoms he likely contracted the virus this past weekend (Twitter link). Jackson traveled from Denver in recent days, Klis adds.

Miller, Elliott, Jackson and Sean Payton are thus far the most notable NFL figures to test positive for the virus that has infected more than two million Americans and killed more than 119,000. A three-tests-per-week policy has surfaced as a potential course of action this season, but how the league will navigate this virus as its 32 teams — rostering nearly 3,000 players — report to camp has become the obvious central storyline this year.

The Broncos signed Jackson to a three-year, $33MM deal last March and moved the longtime Texans cornerback to safety. He and Justin Simmons emerged as one of the NFL’s best safety tandems last season.

On the heels of the Broncos’ blowout loss to the Chiefs, they got some more tough news. Starting cornerback Kareem Jackson has been suspended for the final two games of the season, according to Mike Klis of Denver 9 News (Twitter link).

According to Klis, the suspension stems from a September arrest for DUI. With the two-game ban, Jackson will be barred from playing in the team’s final games of 2019 against the Lions and Raiders.

Jackson, 31, joined the Broncos on a three-year, $33MM deal in March with $23MM guaranteed. Pro Football Focus’ No. 14-graded cornerback in 2018, Jackson began the 2018 season at safety for the Texans and fared well there, but was shifted back to corner later in the year.

With the Broncos, he’s started in all 13 of his games while seeing time at different spots in the secondary. His season will end with 71 total tackles, two interceptions (including one against his old friends in Houston), and a forced fumble.

Now that he’s back with the Chargers, running back Melvin Gordon will instantly vault to the top of the club’s depth chart. “He’s our starter. No doubt,” said head coach Anthony Lynn, tweets Field Yates of ESPN.com. “He was our starter for a reason… as soon as Melvin’s ready, he’ll go back. He’ll go back to number one.” Lynn also said backups Austin Ekeler and Justin Jackson will continue to get work, but Gordon will become the No. 1 back. Meanwhile, Los Angeles received a roster exemption for Gordon, per Aaron Wilson of the Houston Chronicle (Twitter link). Gordon’s exemption ends on October 7, so the Chargers don’t technically have to activate him for either Week 4 or 5.

The Broncos employ three of the top slot cornerbacks in the league, with recent signings Kareem Jackson and Bryce Callahan joining longtime slot kingpin Chris Harris. Vic Fangio, however, confirmed the Broncos will also use Jackson as a safety, where he lined up in base packages all offseason. The Broncos have not settled on how they’re going to mix and match three corners who do their best work as inside cover men.

“We still have some things that we have to figure out as to exactly how we are lining up our secondary, figure out the starters up front of all the positions, and then playing the different packages — the five-DB packages, the six-DB, etc.,” Fangio said, via Nicki Jhabvala of The Athletic (subscription required). “I think we have some versatility. We’ve got three good players that have played nickel at a high level in this league, and that is highly unusual.”

Despite his status as one of the NFL’s premier corners, Harris does not have a surefire role yet, Mark Kizsla of the Denver Post notes. The ninth-year player has previously worked as a boundary corner in Broncos base sets before shifting inside in sub-packages, which has keyed the former UDFA’s rise to prominence. Pro Football Focus graded the four-time Pro Bowler as its No. 3 corner last season. Harris has requested to play more outside corner in the past but doesn’t appear to prefer ceding too much time at his top job.

“I think I have a different role every week,” Harris said, via Jhabvala. “We’ve got so many guys that are interchangeable, but we’ve got a chance of me playing all outside and then one day of me playing the inside. To me, I think it just looks different with me inside. I’m just a totally different man inside compared to everybody else.”

Here is more from Denver and the latest from other AFC cities:

The Broncos entered this free agency period with needs at multiple secondary spots. They are signing a player with experience at both of them.

Denver reached an agreement to sign Kareem Jackson, Mike Klis of 9News tweets. It’s a three-year deal for the longtime Texans cornerback/safety. Jackson will join the Broncos for $33MM, per Ian Rapoport of NFL.com, who adds the veteran defender will receive $23MM fully guaranteed (Twitter link). 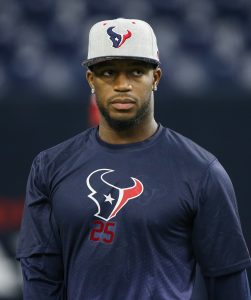 This marks the second key defensive back the Texans have lost in the past two hours, with Tyrann Mathieu reaching a record-tying agreement to join the Chiefs. For the Broncos, Jackson adds some interesting flexibility and is coming off a Pro Bowl-caliber season. A nine-season Texans starter, Jackson was Houston’s longest-tenured player.

Pro Football Focus’ No. 14-graded cornerback in 2018, Jackson began the 2018 season at safety. He fared well there before being moved back to corner. The former first-round pick has been regarded as a top-flight tackler at the corner position throughout his career. The 2019 season will be Jackson’s age-31 campaign, so if he sticks at cornerback, Denver will have two corners north of 30.

Jackson’s impending deal may have interesting implications for longtime Broncos stalwart Chris Harris, who is no longer the team’s highest-paid corner. Jackson’s contract eclipses Harris’ by a considerable margin. Jackson has yet to make a Pro Bowl. Considering the soon-to-be 30-year-old Harris is one of this era’s premier corners, it will be interesting to see how Denver addresses the four-time Pro Bowler’s situation. The Broncos are believed to be discussing a Harris extension, but nothing is imminent on that front.

The Broncos also have a need at safety opposite Justin Simmons, with the team having released four-year starter Darian Stewart. While most of Jackson’s NFL experience has come at corner, and he should be considered likely to replace Bradley Roby as the starter opposite Harris, the team may have an interesting fallback option for the well-compensated free agent.