Kliff Kingsbury‘s offense does not feature too much from the tight end position, statistically speaking, but the Cardinals have been pleased with Maxx Williams‘ contributions. The parties agreed on a new contract Saturday. 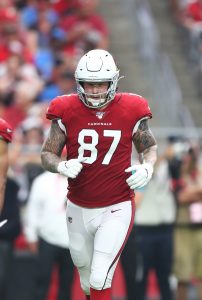 Williams has made 11 receptions for 139 yards. While the 12.6 yards per catch represents a career-high figure, the fifth-year player has not been targeted more than three times in a game this season. The former Ravens second-round pick has caught more than one pass in a game just once all year. He leads Cards tight ends with 277 snaps, edging fellow first-year Cardinal Charles Clay‘s 248.

Pro Football Focus has given Williams a middle-of-the-road run-blocking assessment but views him as one of the best pass-blocking tight ends this season. While Arizona has used its tight ends sparingly in an offense that features plenty of four-wideout, one-running back looks, the team will keep one of its role players around for at least another year.

Free agent tight end Maxx Williams has agreed to sign with the Cardinals, as Williams himself tweeted. He will have a chance to rejuvenate his career in Arizona, whose tight end depth chart is not particularly imposing. 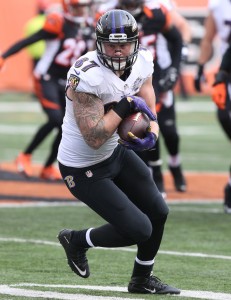 Williams, whom the Ravens selected in the second round of the 2015 draft, entered the league with plenty of promise. Baltimore actually traded up to land the Minnesota product, and the club had visions of him catching deep passes down the seam and creating mismatches with linebackers in the passing game.

And while Williams showed flashes of that ability, injuries have hampered him throughout his professional career, and after the Ravens selected Hayden Hurst and Mark Andrews in the 2018 draft and re-signed Nick Boyle this offseason, it was clear that Williams’ time in Baltimore could be coming to an end.

But while he never blossomed into the receiver the Ravens hoped he could be, he has become a solid blocker, and he is just 25, so he may yet realize some of his former potential as a pass catcher. The Cardinals signed Charles Clay this offseason and made UCLA product Caleb Johnson this year’s Mr. Irrelevant with the final pick of last week’s draft, and the club is also rostering Ricky Seals-Jones, but none of those players are going to prevent Williams from getting an extended look.

Broncos QB Paxton Lynch did not play particularly well in last night’s preseason contest against the 49ers. He completed 9-of-13 passes for just 39 yards, no touchdowns, and no interceptions, which culminated in a 72.3 quarterback rating. He also rushed three times for 27 yards. While he showed some promise, he also displayed difficulties reading and reacting to defenses, and he was thoroughly outplayed by Trevor Siemian, leading Nicki Jhabvala of the Denver Post to believe that Denver’s quarterback competition may be over and that Siemian may have won it for the second straight year. Head coach Vance Joseph said it would be ideal to name a winner prior to next week’s third preseason game, but he added, “The timeframe is not important. What’s important is we get it right, so it could be this week, it could be next week. But we’re going to go back and watch the tape and see where we are.”

The Saints have too many linebackers and not enough spots, which could lead to the ouster of either Manti Te’o or Stephone Anthony, writes Mike Triplett of ESPN.com. Te’o hasn’t even played a down yet for the Saints, who signed him in May, but his two-year, $5MM deal includes just $600K in guarantees. With that in mind, the former Charger will be easy to jettison if he doesn’t impress Saints coaches in the coming weeks. Anthony’s contract, on the other hand, isn’t so team friendly. Cutting him wouldn’t save the Saints any money this year, yet it would leave them with $2.1MM-plus in dead money. While the 24-year-old was a first-round pick of the Saints not long ago, in 2015, he’s coming off a subpar second season that ended after 10 games on account of a knee injury.

The Ravens announced that they have placed tight end Maxx Williams on injured reserve. Williams has been dealing with a knee injury that will likely require surgery.

Under the new IR rules, players can return to action after eight weeks on the list. However, this is probably a season-ender for Williams since its sounds like he is going under the knife. The team has yet to make a corresponding move, but they could activate tight end Darren Waller to the 53-man roster, according to the team website. Waller is set to return from a four-game suspension this week. The team also recently brought up tight end Daniel Brown, so they may not opt for another player at that position.

Williams’ knee injury was manageable until he aggravated it in Sunday’s contest against the Raiders. A second-round pick in 2015, Williams set franchise rookie tight end records last year with 32 receptions for 268 yards and one touchdown. Now, Baltimore will have to wait until next year to see him on the field again.

The Ravens have reached a deal with second-round tight end Maxx Williams, a source tells Aaron Wilson of the Baltimore Sun. Williams is the second Baltimore draftee known to have struck an agreement with the club, following fourth-round cornerback Tray Walker.

Williams, the 55th overall pick last Friday, could become an immediate contributor in Baltimore given the uncertain health status of veteran tight end Dennis Pitta and the offseason departure of last year’s starter, Owen Daniels. The Ravens felt strongly enough about Williams to give up a fifth-round pick to move up three spots in the second round to make sure they landed him.

Per Over the Cap’s draft pool figures, Williams will make just over $4MM on his four-year deal with Baltimore, including a signing bonus of about $1.21MM

Following the second day of the draft, the league’s coaches and general managers took time to explain their logic to reporters. We already took a look at some of the notable soundbites out of the NFC, so let’s now shift our focus to the other conference…

Patriots coach Bill Belichick on the team’s selection of safety Jordan Richards in the second round (via Mike Reiss of ESPN.com):

“[Richard is a]strong tackler, a pretty instinctive guy, and certainly able to play on the punt team, kickoff return, kickoff coverage and punt return — could be a matchup guy outside or maybe a hold-up guy in the box. I’m sure he’ll be able to contribute in the kicking game.”

Belichick on his team’s trade with the Browns:

“We get to a point where we feel it’s time to go get a player, we wait through three or four picks and then I get a little antsy. When you’ve got ammunition, you just go and get the player. It wouldn’t have mattered who was picking at that spot for us to move up and get the guy.”

“Jim Irsay, the owner for the Colts, almost every year of the draft used to always say, ‘You don’t control the draft. The draft controls you.’ And that’s a lot of times what happens. There may be a certain way you want to go. But if there’s not a player you have evaluated in that spot, there’s nothing you can do about it. So you’ve got to stick with your board… These players fit the characteristics we’re looking for. I think they make us a better football team, and we’re happy to have these guys. They’re going to have pretty good careers here.”