The NFL has suspended Chiefs defensive lineman Breeland Speaks, as Field Yates of ESPN.com tweets. It’s a four-game ban for Speaks, though he’s on injured reserve and done for the year anyway. 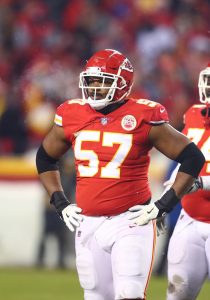 Speaks landed on IR after injuring his knee in a preseason game against the Texans. He’ll spend the offseason healing up, with an eye on bouncing back in 2020.

The former second-round pick played in every game last year for the Chiefs. He finished out with 24 tackles, 1.5 sacks, a forced fumble, and two fumble recoveries.

Speaks still has two full years to go on his rookie deal, tying him to KC through the 2021 season.

To the dismay of many analysts, the Giants didn’t use the second overall pick on a franchise quarterback, instead opting to select running back Saquon Barkley, who figures to make a more immediate impact. Incumbent signal-caller Eli Manning, however, was — perhaps obviously — pleased with New York’s decision not to draft his successor. “It was kind of a vote of confidence in that they trusted in me that I can play at a high level, can win games, take us deep in playoffs and win championships and win championships still,” Manning said, per SiriusXM NFL Radio. “And you know what? I want to prove them right and I want to make them look smart and make them to have made the right decision in doing that.” The Giants are going all-in with Manning under center, and are hoping new head coach Pat Shurmur can do for Manning what he did for journeyman Case Keenum in Minnesota in 2017. Last year, the 37-year-old Manning finished just 23rd in both adjusted net yards per attempt and passer rating.