After trading their center of the past six years, the Raiders appear to have settled on a replacement. They are signing former Texans snapper Nick Martin, Ian Rapoport of NFL.com tweets. 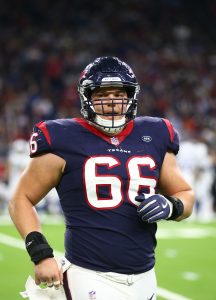 Martin’s work will not remind most of Rodney Hudson‘s, with the since-traded center being a three-time Pro Bowler. Still, the Raiders figure to save substantially by replacing Hudson with Martin.

Transitioning to their Nick Caserio regime, the Texans cut Martin after he spent the past four seasons as their starting center. While he did not fare as well as Hudson did in this span, Martin did receive an $11MM-per-year extension from the previous Texans regime. Martin will attempt to rebound in Las Vegas.

The Raiders have made some interesting decisions this week. Their three highest-paid O-linemen — Hudson, right tackle Trent Brown and longtime right guard Gabe Jackson — are gone. The team has since re-signed Richie Incognito after cutting him, and brought back the player who replaced Incognito post-injury last season, Denzelle Good. Las Vegas appears to still have a hole at right tackle, but the other four spots along its offensive line may be set.

However, third-year blocker Andre James may factor into the equation at center. This should be considered James’ job to lose, Vic Tafur of The Athletic tweets. While Martin has a massive experience edge (62 starts to one), he might not be a lock to start in Vegas.

The only center to start a Texans game during Deshaun Watson‘s career is now on the market. The Texans released Nick Martin on Friday, Aaron Wilson of the Houston Chronicle reports (on Twitter). The move is now official.

A 2016 fifth-round pick, Martin missed his entire rookie season but established himself as Houston’s starting center a year later. In every game Watson played as a pro, Martin operated as his center. Martin will join Senio Kelemete as Texans O-linemen cut this week. The Texans also released Duke Johnson on Friday.

By releasing Martin, the Texans will save $6.25MM in cap space. The younger brother of Zack Martin, Nick was due a $7.25MM base salary in 2021 and was signed through the ’22 season. The Texans have moved up to north of $15MM in cap space.

The Texans gave Martin a three-year, $33MM extension ahead of the 2019 season. Going into Friday, that deal remained a top-five center contract. The Nick Caserio–David Culley regime will now look for a new snapper. Whether the new center will snap to Watson in 2021 is certainly another story.

Pro Football Focus has never been especially high on Martin’s work, grading him as the league’s No. 29 center last season and never slotting him higher than 17th. Martin, however, has not missed a start since the 2017 season and remains in his prime. He will turn 28 this offseason.

The current plan for Nick Foles involves a return in November. The Jaguars‘ high-priced free agent addition is out until at least Week 11 due to the broken clavicle he suffered Sunday, and Jeremy Fowler of ESPN.com notes (via Twitter) Foles is loosely targeting that week for his return. This would be welcome news for the Jaguars, but they will have to get through eight games without their experienced passer. Gardner Minshew fared well against the Chiefs, completing 22 of 25 passes for 275 yards and two touchdowns, but he’s a sixth-round rookie. Jacksonville also traded a fifth-round pick for Josh Dobbs. These two represent the team’s quarterback options at this point.

The Texans have signed center Nick Martin to a three-year, $33M extension, as Field Yates of ESPN.com tweets. The pact includes $18.35MM guaranteed, giving Martin some solid security on the pact.

Martin has been the Texans’ starting man in the middle since 2017. Initially, he was primed for a big role as a second-round rookie in 2016, but an ankle injury wiped out his would-be frosh season. Along the way, the Texans have considered moving him to guard, but he has remained the battery mate of quarterback Deshaun Watson.

Prior to this extension, Martin was set to reach the open market after the 2019 season. That ’19 year will remain in tact, but he’ll see a serious pay bump after he collects on his $1.1MM base and $418K prorated bonus. With an average of $11MM/year, Martin will become one of the five highest-paid centers in the NFL.

With Martin under center, the Texans suffered a heartbreaking loss to the Saints on Monday night. Next up, they’ll try to get to .500 when they face the Jaguars in Houston on Sunday.

Despite tearing an ACL in November, Deshaun Watson looks like he’ll have some involvement in the Texans‘ offseason program. The one-time offensive rookie of the year favorite is ahead of schedule in his recovery process, just as Bill O’Brien anticipated he would be coming into the offseason program, James Palmer of NFL.com reports (video link). Watson will be throwing some during the offseason. Although Watson is currently working out in a brace on the injured knee, Palmer notes the second-year quarterback may not have to wear a brace once he returns to game action. The former national championship-winning passer will not participate in the team portions of the Texans’ OTAs but will throw during the seven-on-seven and passing portions of the workouts, per Palmer.

Here’s the latest out of Houston. 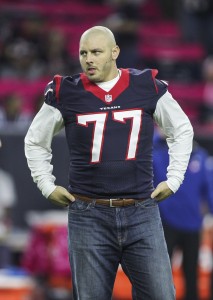 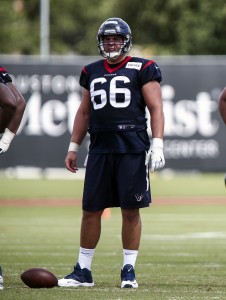 The injury is a big blow to the Texans who were banking on Martin to start for them in 2016. For now, Toledo product Greg Mancz is slated to take that spot. Mancz spent his rookie season on IR with a knee injury that required surgery. The good news is that the reviews on him so far have been positive.

Recently, in a PFR exclusive, scouting guru Dave-Te Thomas wrote that he was high on Martin and optimistic about what he could do as a rookie: