After getting cut by the Bills earlier this week, veteran tight end Jacob Hollister has found a new home. The veteran tight end is expected to sign with the Jaguars, reports NFL Network’s Tom Pelissero (via Twitter). 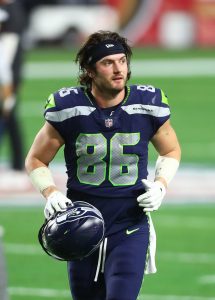 Hollister received interest from several teams, according to Pelissero, but the 27-year-old decided to join Jacksonville. The move will immediately upgrade a tight ends unit that includes Chris Manhertz, James O’Shaughnessy, and Luke Farrell.

Then, when the Seahawks’ new one-year Gerald Everett deal pushed him out, he agreed to a one-year deal with the Bills. While Buffalo carried a handful of tight ends, they decided to move on from their offseason acquisition.

Then, when the Seahawks’ new one-year Gerald Everett deal pushed him out, he agreed to a one-year deal with the Bills. Hollister reunited with his old Wyoming teammate Josh Allen, but it didn’t last long.

Hollister posted four catches for 53 yards in three preseason games for the Bills this year. He’ll likely land with another club before the end of the week.

Hollister gets to reunite with his old Wyoming teammate Josh Allen, which could mean an uptick in targets. After two years of limited usage in New England, Hollister enjoyed a breakout 2019 season with the Seahawks, hauling in 41 receptions for 349 yards and three touchdowns. Then, he went from 59 targets to just 40 looks in 2020. He finished out with 25/209/3.

The writing was on the wall for Hollister — the Seahawks’ new one-year deal for Gerald Everett pushed him out of the equation. Everett, who will earn $7MM on his free agent contract, is coming off a career-year with 41 catches for 417 yards and one TD for the Rams.

Despite having one of the deepest tight end corps in the NFL, the Seahawks won’t let Jacob Hollister walk for nothing. NFL.com’s Tom Pelissero tweets that Seattle is placing a second-round tender on the tight end.

If any team signs Hollister to an offer sheet and the Seahawks decline to match, they’d get that team’s second-round pick in return. That could actually be an option in Seattle, where the team has already added veteran Greg Olsen this offseason. They’re also rostering Will Dissly, who hauled in four touchdowns last season before succumbing to injury.

As for Hollister, the 26-year-old joined the Seahawks last offseason after spending two years with the Patriots. He ended up having a breakout season, hauling in 41 receptions for 349 yards and three touchdowns.

Back in April, the Seahawks traded a conditional 2020 seventh-round pick to the Patriots in exchange for tight end Jacob Hollister, and that low-key trade may end up paying major dividends for Seattle. 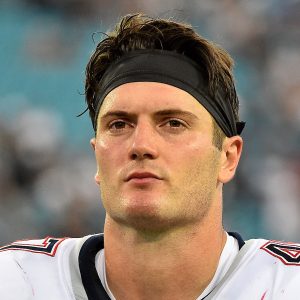 As Mike Reiss of ESPN.com writes, Seahawks offensive coordinator Brian Schottenheimer has been very impressed by Hollister thus far. Schottenheimer has lauded Hollister’s speed and even compared his route-running abilities to Seattle wideout Tyler Lockett. New England once thought highly of Hollister and envisioned a significant role for him at one point, but his brief career has been marred by injuries, so the Pats were willing to let him go for minimal compensation.

Reiss also believes that the Patriots thought Hollister, who signed with New England as an undrafted free agent in 2017, had plateaued in their system. But even though New England’s own tight end situation is a little murky after Rob Gronkowski‘s retirement, Seattle’s TE depth chart looks even more thin.

The Seahawks did not select a tight end in April’s draft, and the only tight ends with any meaningful experience on the roster are Ed Dickson and Nick Vannett, neither of whom are exactly world beaters. So if Hollister can remain healthy and can continue to impress Seattle’s coaching staff, he could be primed for a big role in 2019.

The 25-year-old has eight catches for 95 yards in his pro career.