Lovie Smith is the new coach of the Fighting Illini, the University of Illinois has announced. Smith will take over the program on a contract that will pay him $21MM over six years, per the team’s press release. Smith’s contract at Illinois is back-loaded so the Buccaneers will save $4MM and still owe him $6MM after his firing, Greg Auman of the Tampa Bay Times tweets. 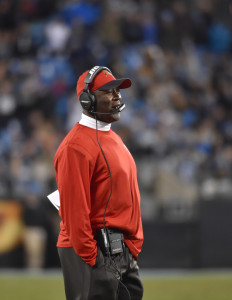 “I am extremely excited to be named head coach of the Fighting Illini,” Smith said. “Josh approached me about this possibility, and I immediately seized on the opportunity to make a difference in the lives of the young men who are part of the program today and in the future. I take this responsibility very seriously and can’t wait to get a staff in place to start our move to make Illinois a contender for Big Ten titles. We will play an exciting brand of football that will make our fans, alumni, student body and members of the University community extremely proud.”

In January, the Buccaneers fired Smith, a move that surprised many. Smith’s Bucs went 6-10 in 2015 but after he survived the calendar year, most observers assumed that his job was safe. Ultimately, the Bucs did not want to lose hot head coaching candidate Dirk Koetter to another team, so they fired Smith and elevated Koetter in his place.

As the press release notes, Smith is now the second coach to go straight from head coach in the NFL to head coach at Champaign-Urbana after John Mackovic made the move in 1988, going from the Chiefs to the Fighting Illini.

Former Buccaneers head coach Lovie Smith is expected to become the new head coach at the University of Illinois, according to Ryan Baker of CBS Chicago (Twitter link). Bruce Feldman of FOX Sports has also confirmed the likely hire. Smith’s move back to the state of Illinois — where he coached the Bears for nine seasons — has repercussions in Tampa Bay, as Rick Stroud of the Tampa Bay Times reports (Twitter link) that Smith’s contract with the Bucs contained offset language pertaining to any football job, not just those in the NFL. Therefore, Tampa is likely to going to recoup some of the $10MM it owes to Smith under the terms of his old deal.

Ron Rivera‘s path to the Panthers emerged when he and Lovie Smith ended a contentious relationship in three seasons working together in Chicago. The former Bears coach didn’t renew the former Bears defensive coordinator’s contract after the duo helped the Bears to Super Bowl XLI during the 2006 season, largely due to philosophical and personal differences, Austin Murphy of SI.com reports.

Smith preferred then-Buccaneers assistant head coach Rod Marinelli for the job upon being hired as Bears coach in 2004, but, per Murphy, Rivera was mandated by then-Chicago GM Jerry Angelo.

The former Bears player under blitz-happy Buddy Ryan, Rivera wanted a blitz-heavy scheme, whereas Smith was a Tampa-2 proponent. Murphy also asserts Rivera’s eight interviews for head-coaching positions while employed as Bears DC were potentially seen as disloyal by Smith.

When Rivera became the Chargers’ linebackers coach in 2007 after Smith denied him a fourth season running the Bears’ defense, he and Smith were on bad terms, a Bears source told Murphy. The 54-year-old Rivera served three years as San Diego’s DC before accepting Carolina’s top coaching job.

Here are some more items from the NFC North on the eve of Super Bowl 50.

Before hiring Adam Gase as their head coach Saturday, the Dolphins considered several other candidates. Armando Salguero of the Miami Herald passes along some interesting information on a handful of those names.

The Dolphins interviewed ex-Falcons head coach Mike Smith, but they felt he lacked “some of the gravitas” for the position. In Mike Shanahan‘s case, Miami’s bigwigs were worried that too many of the two-time Super Bowl winner’s potential assistants had jobs elsewhere, which would’ve negatively affected his ability to assemble a staff. They also had concern about whether Shanahan would be prone to complacency. The Dolphins discussed the idea of pursuing another two-time champion, Tom Coughlin, but they decided the soon-to-be 70-year-old was too advanced in age to factor into their long-term plans. Dan Campbell, the Dolphins’ interim head coach for most of the 2015-16 campaign, was the runner-up to Gase. The team simply didn’t think he was ready for the full-time job. Doug Marrone came in third place, largely because his plan for quarterback Ryan Tannehill wasn’t as enticing as Gase’s.

Tannehill didn’t have the belief of ex-head coach Joe Philbin, Salguero offers, but the Dolphins are confident the relationship between him and Gase will bear more fruit.

Asked today on The Michael Kay Show if the Giants will consider Lovie Smith for their head coaching opening, team co-owner John Mara said he’s “certainly aware” the former Buccaneers head coach is available. According to Mara, he’ll talk to his fellow decision-makers about Smith, but he isn’t sure yet whether the club will try to bring him in (Twitter links via Ralph Vacchiano of the New York Daily News).

The Buccaneers’ firing of head coach Lovie Smith on Wednesday evening shocked the NFL world, but general manager Jason Licht explained today to reporters that he didn’t think the team had been impatient with Smith.

The Bucs GM made a few more comments of note during his session with reporters today, so let’s dive in and round up the highlights (all links go to Twitter)….

10:24am: The Eagles will submit an official request to talk to Koetter as well, according to Alex Marvez of FOX Sports.com.

The Buccaneers, meanwhile, have already spoken with Koetter about taking over as head coach, but a formal interview has yet to take place, Roy Cummings of The Tampa Tribune tweets. That interview could take place today.

9:16am: The 49ers requested permission to interview Koetter on Tuesday and still haven’t gotten an answer back, Adam Schefter of ESPN.com tweets. That could be an indication that Koetter already has the Bucs job in the bag.

6:38am: The Buccaneers will conduct a head coaching search, but their next hire might already be down the hall. Even though the team will go through the process of combing through head coaching candidates, it appears that things are pointing towards a “coronation” of offensive coordinator Dirk Koetter, Rick Stroud of the Tampa Bay Times tweets. Koetter is in play as a candidate for the Dolphins vacancy and as Miami’s interest grew, Bucs ownership felt that it had to move quickly in order to keep its highly-coveted OC from jumping ship (link). 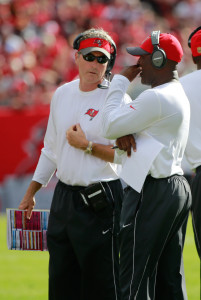 As Pro Football Rumors’ 2016 NFL Head Coaching Search Tracker shows, Koetter is among the baker’s dozen of known candidates for the Dolphins’ head coaching job. The two sides have yet to formally set a date for an interview, but Tampa Bay felt that things were heating up between their OC and South Florida’s other football franchise. Presumably, the Bucs are happy with the work Koetter has done with No. 1 overall pick Jameis Winston and losing Koetter could be detrimental to his development.

Under Koetter’s guidance in 2015, the Bucs averaged 375.9 yards per game, good for 5th in the NFL. Tampa Bay also placed 5th in rushing yards per contest with 135.1 yards on the ground per game. With Koetter calling the plays, running back Doug Martin managed to get back to his old form while 2014 third-round pick Charles Sims made great contributions as a pass-catching option.

9:40pm: Rick Stroud of the Tampa Bay Times (on Twitter) hears that offensive coordinator Dirk Koetter will be a candidate for the head coaching job.

Former Buccaneers GM Mark Dominik (on Twitter) expects the club to name Koetter as its new head coach within the week, though he anticipates that they will still interview a few other candidates. Koetter has been mentioned as a possible candidate for the Dolphins job.

9:24pm: The Buccaneers announced that they have fired coach Lovie Smith. The team issued a press release containing a short statement from Buccaneers Co-Chairman Joel Glazer:

“After careful consideration, we informed Lovie that we have decided to make a change. I want to thank Lovie for his hard work and dedication to the Buccaneers during his time here. This decision was difficult on a variety of levels. I am disappointed that we were not more successful these past few seasons, but we are committed to doing what is necessary to give our fans the winning team they deserve. As we move forward, General Manager Jason Licht will oversee the process for finding our next head coach.”

The news comes out of left field as there has been no chatter about Tampa Bay making a coaching change in recent weeks. Smith, 57, agreed to become the Bucs head coach two years ago after the team canned Greg Schiano. In fact, tomorrow marked the exact two year anniversary of Smith’s introductory press conference.

Things have not exactly gone as planned for Smith and the Bucs over the last two seasons. In 2014, Tampa Bay finished a dismal 2-14, putting them in the NFL’s cellar. In 2015, they used their No. 1 overall pick on FSU quarterback Jameis Winston. Winston showed flashes of promise in his rookie campaign but Tampa Bay didn’t become a contender overnight. After a 6-10 finish, Buccaneers ownership has decided to go in another direction at head coach.

Now, the Buccaneers join the Browns, Dolphins, Giants, Eagles, 49ers, and Titans as clubs who are looking for a new head coach in 2016. Prominent coaches looking for a promising landing spot could do a whole lot worse than the Bucs. Tampa Bay features last year’s No. 1 overall choice at quarterback, a talented young wide receiver in Mike Evans, and the No. 9 overall choice in the 2016 draft.

The Buccaneers could take many different routes with the first-overall pick in this year’s draft, and head coach Lovie Smith indicated as much on Monday. Appearing on the NFL Network, Smith said his team could surprise the league by not selecting either Jameis Winston or Marcus Mariota (via Mike Florio of ProFootballTalk.com):

“I can see why people would assume we’re gonna take a quarterback. There are two excellent quarterbacks that are available at the top and when you get a chance to draft someone like that, most of the time, people do. But there are other good players in the draft also. I think it’s a deep draft for defensive line. Like last year, there are a lot of great receivers that are coming out. I think, just overall, the amount of athletes coming into each incoming class, it’s pretty deep for players that can make an immediate impact.”

As Florio points out, Smith could be hinting that he’s willing to trade the pick.