Obi Melifonwu could be heading back to the AFC East. The former second-round pick worked out for the Jets today, reports Aaron Wilson of the Houston Chronicle (via Twitter). 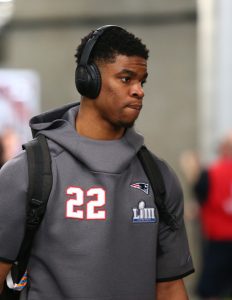 The safety was a highly touted prospect coming out of UConn, and the Raiders ended up using a second-round pick (No. 56) to select the defensive back in 2017. Two stints on the IR limited Melifonwu to only five games during his rookie season, and he was ultimately released by the Raiders midway through his sophomore campaign. He appeared in a pair of games for the Patriots during the second half of that 2018 season, and he ended up spending much of the next year on New England’s practice squad.

Melifonwu was released last April, but he didn’t end up getting another gig during the 2020 season. He signed a futures contract with the 49ers back in January, but he was waived less than four months later.

In total, the 27-year-old has seen time in seven career games, having compiled 10 tackles. Melifonwu turned heads with his speed (4.4-second 40-yard dash time) and athleticism (44-inch vertical), so it isn’t a surprise that the Jets are kicking the tires on a safety with that skill set.

Stepping away from the draft-dominated NFL week, here are the latest minor moves:

The Patriots are cutting safety Obi Melifonwu, as Field Yates of ESPN.com tweets. The former second-round pick of the Raiders will try to get his career back on track with another team in 2020.

Melifonwu didn’t see much playing time in his first year with Oakland due to injury. He finished out his rookie year with seven tackles in five games and two separate IR stints. After his release and injury settlement, he worked out for the Cowboys, Chiefs, Saints, and other clubs before hooking on with the Pats. Now that the Patriots are putting him back on the curb, those other clubs could revisit the safety as a low-cost and low-risk addition to the 90-man roster.

Melifonwu spent time on the Patriots’ taxi squad last year and re-upped with the team on a futures deal in January. After the Pats used a second-round pick to select Kyle Dugger out of D-II Lenoir-Rhyne University, they didn’t have a place for the 26-year-old.

For the time being, the Patriots will have eight wide receivers on their roster. Their move to bring aboard Antonio Brown will not be cutting a wide receiver, but instead, one of their defensive backs received word he’s out.

The Patriots will waive safety Obi Melifonwu, according to ESPN.com’s Field Yates (on Twitter). Additionally, the Pats are releasing Lance Kendricks. The tight end was suspended for Week 1 and did not count against New England’s 53-man roster.

Melifonwu was also a former Raider, though the one-time second-round pick was with New England throughout the Brown debacle in Oakland. Jon Gruden jettisoned Melifonwu, a Reggie McKenzie draft choice, last year. Melifonwu, a UConn product, played in two games for the Patriots last season.

Kendricks was one of the many tight ends the Patriots added this offseason. The former Rams and Packers pass catcher/blocker drew a one-game suspension. While it shouldn’t be ruled out Kendricks could return, as the Patriots will be without Benjamin Watson until Week 5, the defending Super Bowl champions did not exactly miss him in their Week 1 romp over the Steelers.