The Jaguars have signed Adam Gotsis, per a club announcement. The defensive end spent the last four years with the Broncos and spent much of the offseason rehabbing from ACL surgery.

Gotsis just recently got clearance to start running and had to wait a while before he could take an in-person exam with team doctors. Still, he was confident that a deal would come together before the start of the season.

“I’m thinking in a hopeful way that come July, August some teams are like, ‘Well shoot, we need to bring in a D-lineman that can pick up a playbook and has played a lot of snaps and is a smart guy that can just pick up the system in a week,’” Gotsis said in June. “Whereas some of these rookies, in OTAs and stuff is where they really get the chance to get their feet wet with a lot of the NFL vets and then all of a sudden it’s training camp, and they really haven’t had any time working against pro guys. In a way, I think it might be an advantage to me as well in that I can come back healthy and rehabbed.”

Gotsis made 12 starts in 2018 and registered three sacks, but he looked out of place in Vic Fangio‘s defense last year. Then, the ACL tear shut him down for the final stretch of the season. With 28 career starts under his belt, he’ll look to reassert himself as a rotational player in Jacksonville. If he makes the final cut, he’ll spell Josh Allen and (theoretically) Yannick Ngakoue as a reserve. It remains to be seen whether he’ll be ready to go for Week 1.

Former Broncos defensive end Adam Gotsis is still looking for work, but he’s hopeful that a deal isn’t too far off. The free agent says he’s able to run after undergoing ACL surgery. 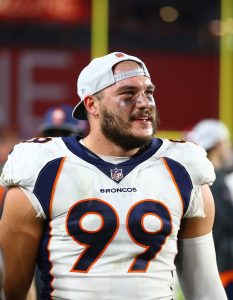 “I was hoping to get cleared to return to football, hopefully, at the start of August,” Gotsis said (via Nicki Jhabvala of The Athletic). “That’s kind of a rough date I put in my head.”

Teams haven’t gotten a close look at Gotsis because of the ongoing pandemic, but that may change in the coming weeks. Early on, doctors believed that Gotsis could miss the first quarter of the 2020 season as he healed up, but the latest news is good news. Gotsis seems to think that he’ll be ready to go in time for Week 1 and, possibly, the tail-end of offseason practices.

“I’m thinking in a hopeful way that come July, August some teams are like, ‘Well shoot, we need to bring in a D-lineman that can pick up a playbook and has played a lot of snaps and is a smart guy that can just pick up the system in a week,’” he said. “Whereas some of these rookies, in OTAs and stuff is where they really get the chance to get their feet wet with a lot of the NFL vets and then all of a sudden it’s training camp, and they really haven’t had any time working against pro guys. In a way, I think it might be an advantage to me as well in that I can come back healthy and rehabbed.”

After compiling three sacks and 38 total tackles in 16 games (12 starts) in 2018, Gotsis registered zero in nine games (three starts) last year with 16 total tackles. Gotsis also didn’t seem get the hang of Vic Fangio‘s defense. With 28 starts under his belt – and more good than bad overall on his game tape – the 27-year-old should be able to find work this summer. But, in all likelihood, it’ll come on a one-year, prove-it deal.

Not too long ago, it seemed as if he Broncos and defensive lineman Adam Gotsis would be entering into a multi-year contract. But Gotsis struggled in 2019 after a promising 2018 campaign, and Mike Klis of 9News.com says Denver will let the 2016 second-rounder hit the open market (Twitter link).

Klis also confirmed that the surgery that ended Gotsis’ 2019 season prematurely was to repair Gotsis’ ACL, and that he may miss the first month of the 2020 season. So Gotsis will almost certainly need to settle for a one-year prove-it deal in an effort to rebuild his value, and it does not like such a deal will be coming from the Broncos.

In other Mile High news, Nicki Jhabvala of The Athletic reports (via Twitter) that the Broncos will not be bringing back linebacker Corey Nelson. Denver selected Nelson in the seventh round of the 2014 draft, and he entered his second tour of duty with the team when he signed a free agent pact last September. But his season ended after seven games due to a torn bicep.

Similarly, the Broncos are not planning to tender RFA corrner De’Vante Bausby, per Troy Renck of Denver7 (Twitter link). Bausby suffered a frightening neck injury in October that was ultimately diagnosed as a cervical sprain, but he has flashed some ability and is reportedly healthy, so he should find a new home at some point this spring.

Though they are preparing to part with Gotsis, Nelson, and Bausby, the Broncos are interested in bringing back linebacker Jeremiah Attaochu, as Klis notes in a separate tweet. In his first year with Denver in 2019, Attaochu started a career-high five games while recording 3.5 sacks, also a career best. However, it does not sound as though the Broncos will re-sign him prior to the opening of free agency and will instead wait until after the first wave of FAs have signed.

2019 did not go as planned for Gotsis, a 2016 second-round pick. This time last year, Gotsis was playing the best football of his career, and it seemed as though he was setting himself up for a lucrative extension. Gotsis said, “[i]t’s exciting knowing that [an extension could] come in the future. I feel like if I take care of what I have to on the field, the extension is going to be there when the time comes. Saying this or saying that won’t get it done for me. It’s just going out there and making plays.”

After compiling three sacks and 38 total tackles in 16 games (12 starts) in 2018, Gotsis didn’t register a single sack in nine games (three starts) this year, and he recorded just 16 total tackles. As Klis observes in a separate tweet, Gotsis appeared to struggle grasping new head coach Vic Fangio‘s defense, and he was never able to build much momentum in 2019.

Troy Renck of Denver 7 says the surgery was to repair Gotsis’ ACL and meniscus in his left knee, and it sounds as if Gotsis has been dealing with that injury for some time (Twitter link). “It sucks but I feel good,” Gotsis said. “I feel like I will be healthy finally.”

Klis suggests that Gotsis may be suiting up elsewhere in 2019. Regardless of where he signs, though, he may have to accept a one-term pact and try to rebuild his value in 2020. The Broncos promoted tackle Quinn Bailey from their practice squad to take Gotsis’ roster spot for Week 17.

Broncos defensive end Adam Gotsis is setting himself up for a solid payday. The former second-rounder is eligible to sign an extension this offseason, and the new contract has certainly been on the 26-year-old’s mind.

“It’s exciting knowing that (could) come in the future,” Gotsis told Ryan O’Halloran of the Denver Post. “I feel like if I take care of what I have to on the field, the extension is going to be there when the time comes. Saying this or saying that won’t get it done for me. It’s just going out there and making plays.”

Gotsis has been productive this season, compiling 35 tackles and a pair of sacks, and Pro Football Focus currently ranks him 51st among 116 interior defenders. As O’Halloran writes, the defensive end has really turned in on over the past six games, as he’s collected 11.5 “stuffs,” two hits, and both of his sacks.

O’Halloran points to the extension signed by teammate Derek Wolfe as a potential basis for Gotsis’ new deal. Wolfe inked a four-year, $36.7MM back in 2016. O’Halloran also opines that inking Gotsis to a new deal with be a priority for John Elway and Denver’s front office.

Gotsis was arrested back in March on the allegations that date back to 2013, and it was reported back in May the district attorney handling his case was still mulling whether to proceed to trial. Ultimately, it seems there wasn’t enough there to move forward.

“The evidence presented does not warrant any further action in this case” the statement from the district attorney’s office read. Gotsis has been practicing with the team, and the Broncos have apparently believed in his innocence all along. Although the charges have been dropped, he’s still not completely out of the woods. While today’s news “increases the chances he will not” face punishment from the NFL, “he could still face league discipline” writes Troy Renck of Denver 7 (Twitter link).

Assuming he isn’t hit with a suspension, Gotsis should play a big role for Denver in 2018. The 63rd overall pick of the 2016 draft, Gotsis started 13 games for the Broncos last season. He racked up 41 tackles, with two sacks and four pass breakups.

Adam Gotsis Could Still Be Charged For Alleged Rape

Adam Gotsis may be practicing with the Broncos, but the defensive end could soon be facing some serious legal issues. Troy E. Renck of TheDenverChannel.com reports that the “Fulton County Georgia district attorney remains undecided on whether to press charges” against Gotsis for an alleged rape that took place five years ago.

We had heard back in March that Gotsis was arrested on rape charges stemming from an alleged 2013 incident. He ultimately surrendered to the charge and was later released on $50K bond. The 2016 second-rounder is accused of overcoming the will of a 25-year-old woman while he was a student at Georgia Tech.

“We were recently informed of an investigation into an alleged incident involving Adam Gotsis that occurred in 2013 when he was in college,” the Broncos said at the time. “Our organization was aware of his arrest on March 7, and it is our understanding that no determination has been made at this time as to whether any charges will be filed. The Broncos take an accusation of this nature very seriously and will continue to closely monitor the legal proceedings.”

Gotsis has spent the past two seasons in Denver, including a 2017 campaign where he started 13 of his 16 games. The 25-year-old ended up setting career-highs across the board, compiling 41 tackles, two sacks, and four passes defended.

Now that he’s going to be departing as a free agent, Kirk Cousins compiled a farewell letter aimed at Redskins fans. However, did Cousins give away his possible destination in the tags portion of his open letter? The earliest version of the quarterback’s published post had “Jets” and “Vikings” as tags, among many other entries, Will Brinson of CBS Sports tweets. So, either the person responsible for operating the tags forgot to leave those out, or has Cousins’ list been narrowed down to two? Of the serious suitors, the Vikings and Jets would make the most sense to be the teams offering a fully guaranteed contract. None of those teams ready to make those offers have been identified. The Broncos and Cardinals do not have as much cap space, though, perhaps making such a proposal dicey. But no finalists have yet to emerge.

Here’s the latest from around the league on Tampering Day 1: