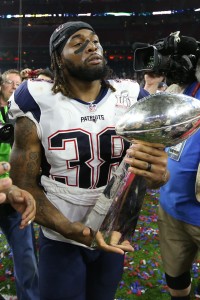 The Dolphins are signing longtime New England Patriots running back Brandon Bolden, according to Armando Salguero of the Miami Herald (Twitter link).

To make room on the roster for Bolden, the team cut center Travis Swanson, who was just signed yesterday. Bolden will get to continue his career in the AFC East, as he spent his first six seasons in New England before being released at final cuts on Saturday.

The Ole Miss product improbably made the Patriots as an undrafted free agent back in 2012, and stuck up until now, a remarkable feat for an undrafted player. He became a core special teams player during his time in New England, as well as handling a significant amount of carries his first few seasons.

In total, he rushed 216 times for 912 yards, good for 4.2 yards per carry, with six touchdowns with the Patriots. He also caught 47 passes for 373 yards and two more touchdowns. He’ll join a Dolphins running backs room that includes Kenyan Drake, Frank Gore, and rookie Kalen Ballage.

The Patriots are bringing back one of their special teams aces for another season. ESPN’s Field Yates reports (via Twitter) that the team has signed running back Brandon Bolden to a one-year, $880K deal. The contract has $170K in guaranteed money, including a $60K signing bonus and $110K of the $790K salary (via the Boston Globe’s Ben Volin). His cap number will be at $720K.

The 2012 undrafted free agent out of Mississippi has spent his entire six-year career in New England, appearing in at least 10 games each season. Recently, Bolden’s contributed mostly on special teams, as ESPN’s Mike Reiss notes (via Twitter) that the running back only played 42 offensive snaps this past season (including 34 in the regular season finale). The 28-year-old ultimately finished the campaign with a career-high eight tackles to along with 67 rushing yards. His best offensive season came during his sophomore campaign, when he rushed for 271 yards and three scores on 55 carries while also hauling in 21 receptions for 152 yards.

While the Patriots have locked up Bolden, Volin points out that the team still has a handful of “key special teamers” who are hitting free agency. The grouping includes Pro Bowler Matt Slater, Nate Ebner, Brandon King, Marquis Flowers and Johnson Bademosi.

The Patriots are placing linebacker Shea McClellin on injured reserve, according to ESPN.com’s Field Yates. The nature of his injury is currently unknown. 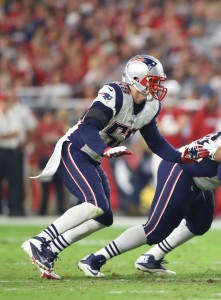 McClellin missed most of the preseason with his mystery ailment. Whatever the issue is, it won’t rule him out for the year as he remains a candidate for one of the team’s IR-DTR spots.

McClellin, a former first-round pick of the Bears, signed a three-year, $9MM deal with the Patriots in 2016. He appeared in 441 snaps for New England last year and made some athletic plays, including his memorable leap over the line of scrimmage to block a field goal against the Ravens in December.

To fill his spot on the roster, the Patriots re-signed running back Brandon Bolden. He had just just one carry last season and spent the bulk of his time on special teams.

When the Patriots finally release their initial 53-man roster, Brandon Bolden won’t be on it. The running back has been released, according to Field Yates of ESPN.com (on Twitter).

Bolden re-signed with the Patriots in April, but his spot was shaky from the get-go. The Patriots added Rex Burkhead and Mike Gillislee to the fold this year, giving him an uphill climb as he battled with a group including fellow incumbents James White and Dion Lewis.

Bolden had just one carry last season with four targets. He was more of a special teams guy in New England and it seems possible that he could return at some point.

After Texans running back D’Onta Foreman‘s arrest on charges of marijuana and unlawful gun possession last Sunday, his attorney, Chip Lewis, claimed that the rookie didn’t “use or possess” the drug. To help clear himself of wrongdoing, Foreman was voluntarily tested for marijuana, and the results came back negative, according to Lewis (via Mark Berman of FOX 26). “It makes it clear that he was telling the truth,” Lewis said of the outcome. “He was not using marijuana.” Foreman has a July 31 court date, though there’s reportedly a strong likelihood of a postponement because the Texans will be at training camp in West Virginia then.

The Dolphins have until May 2 to pick up the 2018 fifth-year option on right tackle Ja’Wuan James, and the decision is not clear-cut, as James Walker of ESPN.com writes. James, 24, has started 39 games since being selected with the 19th overall pick in 2014, and he was solid last season, grading as the league’s No. 32 tackle, per Pro Football Focus. However, because the fifth-year option salary is based on both left and right tackle contracts, it’s expected to be worth approximately $8MM, a figure that would make James the third-highest-paid right tackle in the league on an annual basis. The deal would only be for a single season, however, and is guaranteed for injury only until the first day of the 2018 league year.

The Patriots re-signed running back Brandon Bolden, according to the league’s transactions wire. The signing could impact a pair of high-profile free agent backs previously connected to the team.

LeGarrette Blount remains in free agent limbo and Bolden’s return could be a sign that Blount’s time in New England is through. The Pats now have five running backs under contract – Rex Burkhead, Dion Lewis, James White, D.J. Foster, and Bolden – so there might not be room for Blount. Bolden isn’t a high-profile player like Adrian Peterson, but the Pats might not be especially motivated to add to this already crowded RB group.

Bolden had just one carry last season with four targets. He probably won’t do much on offense in 2017, but he figures to be a key special teams piece.