Marquise Goodwin‘s bid to make a second U.S. Olympic team failed Friday. The Bears wide receiver was unable to qualify for Sunday’s finals in the long jump, placing 19th out of 24 jumpers in the prelims at the U.S. Olympic trials. An Olympian in 2012, Goodwin has now fallen short of returning to the U.S. team in back-to-back trials. He placed seventh at the 2016 Rio-qualifying event. The 30-year-old’s best jump a 24-foot, 10-inch leap, was nearly three feet shy of his career-best mark — set at the 2012 trials. Goodwin falling short should not exactly surprise, given his focus on an NFL career in the years since the London Games. Although the veteran wideout met the Olympic standard at a March meet, he has been far from an active jumper during his NFL career. He can now transition to full-time football prep. Goodwin, who signed with the Bears in April, will now be on track to join his team on time for training camp.

Today’s minor transactions from around the NFL:

This week, embattled receiver Josh Gordon earned the fifth suspension of his career, as he was banned from the league for violating the league’s policies on performance-enhancing substances and substances of abuse. Naturally, some have questioned if the 28-year-old’s NFL career has come to an end.

Russell Wilson got to know Gordon during his brief stint in Seattle, and the Seahawks quarterback is confident that the receiver will see the field again.

“I got pretty close with Josh,” Wilson said (via Mike Florio of ProFootballTalk.com). “You’re going to miss him obviously as a player, but more importantly as a friend and as a guy you bonded with pretty quickly. We’ve been staying in touch and all that. I just pray for him. I really believe that prayer works. I really believe that relationships and friendships work in supporting no matter what we go through. We all have stuff. We all have things that we go through. I’m just praying for him and rooting for him. He’ll overcome. He’s going to overcome, and I really believe that. Hopefully, he’ll get another chance to play with us because he was fun to play with.”

Since joining the Seahawks in early November, Gordon caught just seven passes for 139 yards and zero touchdowns. It’s a far cry from his best work, including a 2014 season in which he had 87 receptions for 1,646 yards and nine touchdowns in 14 games with the Browns.

Like all first-round picks, Murray has signed a four-year deal with a fifth-year option for the 2023 season. Per Over the Cap, Murray’s contract should be worth $33.159MM in total. He’ll receive a signing bonus of roughly $23.59MM, and carry a cap charge of $6.392MM during his rookie campaign. Murray’s contract contains language that will void the deal if he leaves the NFL to pursue his baseball career, tweets Mike Florio of Pro Football Talk.

Murray, of course, spurned MLB’s Oakland Athletics in order to enter the NFL Draft. The Cardinals have since traded 2018 first-round quarterback Josh Rosen to the Dolphins, and intend to install an Air Raid system under new head coach Kliff Kingsbury. Along with new weapons like rookie wideouts Andy Isabella and Hakeem Butler (neither of whom was signed today), the Cardinals will look to improve an offense that ranked among the league’s worst last year.

While Murray is the headliner, Murphy is a name-brand prospect in his own right. Projected by many observers to become the first cornerback off the board, Murphy ultimately lasted until the first pick of the second round. An excellent zone coverage corner, Murphy will fit in well with new defensive coordinator Vance Joseph‘s zone-heavy scheme.

Washington cornerback Byron Murphy is the heavy favorite to be the first pick of the second round on Friday night, provided that Arizona holds on to the pick, Adam Schefter of ESPN.com tweets. Of course, the top choice in the second round is extremely valuable, so it’s entirely possible that another team will be on the clock at No. 33 overall. 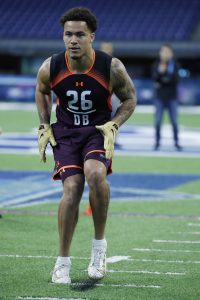 The Cardinals probably aren’t the only team eyeing Murphy and other top cornerbacks left on the board. Only one cornerback was drafted in the first round on Thursday night, leaving LSU’s Greedy Williams, Temple’s Rock Ya-Sin, Michigan State’s Justin Layne, Notre Dame’s Julian Love, Central Michigan’s Sean Bunting, and several others up for grabs.

There were plenty of CB holes to be filled heading into the first round, but general uncertainty about this year’s crop may have stalled things, Browns GM John Dorsey says (Twitter link via ESPN.com’s Adam Schefter):

Florida offensive tackle Jawaan Taylor met with the Bengals on Tuesday, according to Adam Schefter of ESPN.com (Twitter link). Taylor, who stands 6’5″ and 328 pounds, certainly has the size requirements favored by new Cincinnati offensive line coach Jim Turner, but it’s unclear if the ex-Gator will be available when the Bengals make their first-round selection at No. 11. Along with Jonah Williams (Alabama), Andre Dillard (Washington State), and Cody Ford (Oklahoma), Taylor is considered one of the best tackle prospects available in the 2019 draft. If selected by the Bengals, Taylor could immediately take over at right tackle, displacing the recently re-signed Bobby Hart, and would be a long-term option to replace Cordy Glenn on the blindside.

The Steelers could be eyeing a cornerback with one of their top-two picks. ESPN’s Jeremy Fowler reports (via Twitter) that the team will be hosting a pair defensive back prospects this week: Georgia’s Deandre Baker and Washington’s Byron Murphy.

Along with Temple’s Rock Ya-Sin and LSU’s Greedy Williams, both Baker and Murphy are expected to be taken at some point during the first two rounds. Baker won the Jim Thorpe Award for best collegiate cornerback in 2018 after he compiled 31 tackles, two sacks, nine passes defended, and a pair of interceptions in 12 games. Murphy earned a spot on the first-team All-Pac-12 list after putting up 37 tackles, four picks, and 13 interceptions.

As Fowler points out, this isn’t necessarily an ideal scenario for the Steelers. After all, the organization selected five cornerbacks between the 2015 and 2017 draft. Furthermore, their projected starters (Joe Haden and Steven Nelson) were both acquired via free agency.