The Lions announced that they have re-signed cornerback Crezdon Butler. To make room, defensive tackle Stefan Charles has been placed on IR. 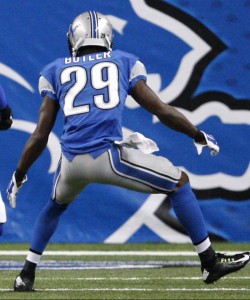 The signing of Butler could be a sign that Darius Slay will not be able to go in Week 17. Slay has been dealing with a hamstring injury that kept him out of action in Week 16 against the Cowboys. This week, they hope to have him in uniform as they take on the Packers in a game that will decide the NFC North championship.

Butler had two separate stints with Detroit last year but he has yet to appear in an NFL game in 2016. Over the years, he has seen action with the Steelers, Cardinals, Bills, Redskins, Chargers, Bucs, and Seahawks.

The Lions opted to keep reserve cornerback Crezdon Butler and long snapper Don Muhlbach, according to the team’s website. Contract terms were not disclosed.

Butler’s ventured to several NFL destinations since arriving in the NFL as a Steelers fifth-rounder in 2010. The 29-year-old corner served as secondary depth for Detroit, which lost now-retired Rashean Mathis, for the season. He’s played for eight teams and suited up in 45 games, making three starts — all for the Buccaneers in 2014.

Butler spent training camp with the Lions in 2015 before rejoining the team midseason after spending time with the Seahawks.

Muhlbach has been the Lions’ specialty snapper since 2004. Only the seventh player to play in 180 games for the Lions, Muhlbach is the team’s longest-tenured player by a wide margin now that Calvin Johnson announced his retirement.

Due to a concussion sustained in Week 7 against the Vikings, Lions starting right cornerback Rashean Mathis will head to injured reserve, Tim Twentyman of DetroitLions.com reports.

The 35-year-old’s started 36 games for the Lions since coming over from Jacksonville as a free agent in 2013. The Lions re-signed Mathis to a $3.5MM deal prior to this season, and per Twentyman, this setback places his future with the team — and probably the league — in question.

Mathis’ contract extends into 2016, but the veteran’s deal contains just $375K worth of dead money. The Lions would save $1.5MM by parting ways with the 13-year veteran.

The contract stipulates a $500K roster bonus will be due on the third day of the 2016 league year, and Dave Birkett of the Detroit Free Press (on Twitter) doesn’t expect the Lions to pay it.

Mathis, who’s snared 32 career interceptions since being selected in the second round of the 2003 draft, experienced consistent headaches since the injury, and Detroit opted to put him on IR after he spent time in the league’s concussion protocol.

Butler’s spent time with eight other teams since 2010, most recently seeing action with the Seahawks in Week 6.

The Seahawks worked out a large group of players recently, according to Aaron Wilson of the Houston Chronicle (via Twitter). Among the attendants were running back Cyrus Gray and cornerbacks Robert McClain, Marc Anthony, Crezdon Butler, Chimdi Chekwa, Brandon McGee, and Trovon Reed.

McClain may be the most established of this group, as the former seventh-round pick played a big role for the Falcons over the past three seasons. The 27-year-old was in camp with the Patriots, but he was ultimately cut. Chekwa, a former fourth-rounder, also spent time with the Patriots this preseason, and he briefly landed with the Raiders after being cut by New England.

Butler started three games with the Buccaneers last season, compiling a career-high 14 tackles. McGee, meanwhile, only played two games in 2014, following a 2013 campaign where he made 15 appearances.

Anthony and Reed have bounced around practice squads and have yet to make an NFL appearance.

Gray spent the first three seasons of his career with the Chiefs, where he managed to rush for 99 yards on 24 carries. He’s also hauled in nine catches for 64 yards.