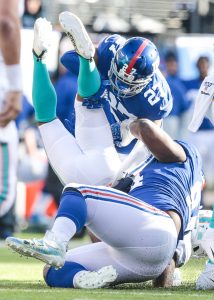 The armed robbery charges against former Giants cornerback Deandre Baker have been dropped and he’s already drawing interest from a handful of NFL teams. The Chiefs, Bengals, 49ers, and Jaguars are all in on Baker, according to Paul Schwartz of the New York Post (on Twitter). The Cowboys, he adds, “could also be in play.”

The Giants, who immediately distanced themselves from Baker following the allegations from Florida, are not interested in a reunion, Schwartz says. Giants head coach Joe Judge effectively confirmed that when speaking with reporters on Monday.

“[We] wish him the best luck in the future,” Judge said. “We’ve made the decision we think is best for the program. That is all I have to say about that.”

The Giants traded up from the second round in 2019 to draft Baker towards the back-end of the first round. A standout at Georgia, Baker was widely regarded as the top cornerback in the class. The 5-foot-11 athlete turned in a standout 2018 season with the Bulldogs, compiling 40 tackles, two sacks, nine passes defended, and two picks. However, he struggled to grasp the playbook as a rookie and wound up benched late in the season. All in all, he had 55 stops, zero interceptions, and lots of headache-inducing game tape.

On the other hand, Baker is still young and represents a low-risk, high-reward signing for teams like the Chiefs and 49ers. He’s free to sign with any team, though NFL discipline could still be in his future.

The four armed robbery charges against DeAndre Baker have been dropped, per an announcement from Florida prosecutors. Meanwhile, the attorney for three of Baker’s accusers has been arrested on extortion charges (via Ryan Dunleavy of the New York Post).

Laywer William Dean represented three of Baker’s accusers — all of whom recanted their statements last week. There was a fourth accuser who wasn’t represented by Dean, and he did not appear for a hearing in October. Reportedly, Dean tried to pry as much as $1.5M from Baker in exchange for his clients changing their statements.

A quick refresher: Baker was alleged to have robbed a party at gunpoint in May. Originally, Seahawks cornerback Quinton Dunbar was charged as his accomplice, but the Broward State Attorney’s office declined to pursue charges against him. The story has only gotten stranger from there, including payoff allegations against attorney Michael Grieco, who was once representing Dunbar. The charges against Dunbar have since been dropped.

The Giants kept their distance from Baker throughout the process before formally waiving him in September. He is now a full-fledged free agent and free to sign with any club, though he could still be subject to fines or suspensions from the league office.

As expected, the Giants have officially parted ways with cornerback Deandre Baker. The 22-year-old will be available for the rest of the league on the waiver wire, but it seems unlikely that he’ll be claimed.

Baker is alleged to have robbed a party at gunpoint in May. Originally, Seahawks cornerback Quinton Dunbar was charged as his accomplice, but the Broward State Attorney’s office declined to pursue charges against him. Baker still has felony charges to face, plus allegations of bribing witnesses.

Baker, the No. 30 overall pick in the 2019 draft, appeared in all 16 of the Giants’ games last year, including 15 starts. He notched eight passes defensed, but still looked pretty green on the whole. The Giants were expecting a big leap forward from him this year, up until the incident in Florida.

If convicted, Baker could face life in prison. Meanwhile, the Giants will attempt to recoup some of Baker’s $10.5MM in guarantees.

DeAndre Baker‘s legal process ran into a delay this week. His arraignment will take place in January, after previously being on tap for September. The Giants may not wait for the legal process to play out. 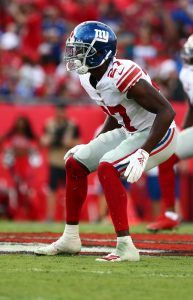 They are expected to cut Baker before this takes place, Ryan Dunleavy of the New York Post reports. Baker currently resides on the commissioner’s exempt list and will not be on New York’s 53-man roster to start the season. He can be cut at any point, however. Giants GM Dave Gettleman said this week the Giants are still determining their Baker decision.

Contractual matters are holding up the Baker move, Dunleavy adds, with the team appearing committed to moving on from what looks like a major draft miss. Baker, 22, has been charged with four counts of robbery with a firearm in connection with an incident that took place earlier this year in Florida. He has also been hit with a civil suit and was connected to an attempt to pay off witnesses earlier this summer. The Giants will attempt to recoup some of Baker’s $10.5MM in guarantees, Dunleavy notes.

The Giants traded up in the 2019 first round to select Baker, but the Georgia product struggled for most of his rookie season. His deal, which calls for a $973K base salary this season, runs through 2022. If convicted, Baker could face up to life in prison.

Jalen Reagor will miss the Eagles‘ season opener, and possibly the first two games of the year, with a labrum tear, Drew Davison of the Fort Worth Star-Telegram hears. The silver lining is that Reagor’s shoulder injury is not major and he will not require surgery. Reagor, the No. 21 overall pick in the draft, racked up 2,248 yards and 22 touchdowns over the course of three seasons at TCU. The speedster figures to play a significant role in the Eagles’ offense when he returns.