It’s only natural for siblings to steal toys from one another. Perhaps that explains Jon Gruden‘s early approach to free agency. Tight end Derek Carrier and the Raiders have agreed to a three-year deal, a source tells Ian Rapoport of NFL.com (on Twitter).

Carrier spent two seasons with the Redskins, under the tutelage of Jon’s brother Jay Gruden. Last year, he was shipped to the Rams in a September trade.

The 27-year-old was mostly irrelevant on offense, hauling in only eight receptions for 71 yards. In 190 snaps, the former undrafted free agent out of Beloit proved to adequate in blocking, especially in pass situations. Carrier didn’t play enough to earn a spot in Pro Football Focus’ rankings, but his rating suggests he would have been listed 30th among 71 eligible tight ends.

Carrier will join a new-crowded tight end crop in Oakland. The team is currently rostering three others at the position, including Jared Cook, Clive Walford, and Pharaoh Brown. Cook is coming off of wrist surgery, however, and Lee Smith is a pending free agent.

We heard earlier this morning that the Redskins could consider cutting tight end Derek Carrier. Now, it sounds like the player is actually getting traded, as ESPN’s Adam Schefter reports (via Twitter) that Carrier has been traded to the Rams. Washington will receive a 2018 seventh-rounder (via the team’s Twitter account).

The tight end struggled to stay healthy during his two seasons in Washington, appearing in only 20 games after tearing his ACL towards the end of the 2015 campaign. During his two years with the Redskins, Carrier hauled in only 19 catches for 151 yards and one touchdown. With Washington currently rostering four tight ends in Jordan Reed, Vernon Davis, Niles Paul, and rookie Jeremy Sprinkle, Carrier was clearly expendable. The Redskins initially acquired the tight end after sending a conditional fifth-rounder to the 49ers before the 2015 season. Carrier has also had brief stints with the Raiders and Eagles.

The trade means that the tight end will be reuniting with his former offensive coordinator, Sean McVay, who is now the head coach in Los Angeles. Carrier could have an opportunity to contribute, although it’s likely that the team rolls with second-rounder Gerald Everett as their starter. Therefore, the recently-acquired tight end will presumably compete with Tyler Higbee and Cory Harkey for a reserve role.

One way or another, Derek Carrier‘s time with the Redskins is drawing to a close today. If the Redskins cannot find a trade for him by this afternoon’s roster deadline they’ll release him outright, Ian Rapoport of NFL.com tweets.

Carrier has been slowed by injuries ever since coming to the Redskins in 2015. He suffered a torn ACL during the 2015 season and his recovery extended into 2016. He has appeared in 20 games for Washington, but he has only 19 receptions to his name during that time.

If a team trades for Carrier, they’ll be taking on a $1MM cap charge for 2017. A trade doesn’t seem terribly likely, but two teams are at least discussing a swap with Washington today.

The Redskins have discussed tight end Derek Carrier with multiple teams interested in trading for him, sources tell John Keim of ESPN.com.

Washington currently has a surplus of tight ends, as Jordan Reed, Vernon Davis, Niles Paul, rookie Jeremy Sprinkle, and Carrier are all vying for roster spots. While Carrier has been a productive camp and is viewed in a positive light by Redskins management, the club simply has too many bodies at the position, and only plans to keep four tight ends on the roster, per Keim.

The Redskins originally acquired Carrier from the 49ers prior to the 2015 season in exchange for a conditional fifth-round pick. His stint in Washington has mostly been marred by injury, as a torn ACL prematurely ended his 2015 campaign and delayed the start of his 2016 season. All told, the 27-year-old Carrier has managed 19 receptions in 20 games in the nation’s capital.

Carrier has one year left on his contract, and will become an unrestricted free agent next spring. An acquiring club would take Carrier’s 2017 cap charge of roughly $1MM.

During Friday’s preseason game, Austin Davis outplayed Trevone Boykin as the pair of Seahawks quarterbacks battled for the backup gig behind Russell Wilson. While Davis finished with a perfect quarterback rating, Boykin went 0-for-6 while tossing an interception. Despite the clear disparity in their performance, coach Pete Carroll was adamant that the organization won’t be basing their final decision on one game.

“I really think that we were just out of sync so much for the first 10, 12 plays there that Boykin just couldn’t get rolling,” Carroll said (via Stefanie Loh of the Seattle Times). “It just felt like we were out of whack for a bit. Austin came right in we kind of fit together very nicely.

“Trevone has had a really good preseason so far. I don’t think five to six passes he threw in this game should be in the final decision. I think he’s done very well.”

Of course, the team could decide to hang on to three quarterbacks, and Carroll seemingly left that possibility open.

Sidelined for nearly a year since seeing his most promising NFL season end early with a torn ACL and MCL, Derek Carrier is set to rejoin the Redskins’ 53-man roster. The fifth-year tight end and 2015 trade acquisition will be activated from the PUP list in advance of Sunday’s Redskins-Vikings game, John Keim of ESPN.com reports. 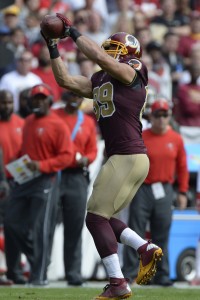 Carrier will fill Niles Paul‘s place as Washington’s third tight end behind Jordan Reed and Vernon Davis. He’s been on the PUP since the team pared its roster to 75 players in August.

This continues the fluidity of the Redskins’ tight end corps behind Reed over the past two seasons, with recently re-signed Paul and Logan Paulsen no longer part of the equation. Reed has already missed time this season with the latest in a string of concussions, so Washington’s tight end depth has been tested this fall.

Traded from the 49ers after Paul and Paulsen went down last summer, Carrier started 11 games and played in 12 for the Redskins in 2015. The former UDFA caught 17 passes for 141 yards and a touchdown before tearing up his knee in early December. The 26-year-old Carrier has been running sprints with the team recently but hasn’t incorporated contact into his recovery routine yet.

Carrier has one season left on his rookie contract, being set to see his salary climb to just over $1MM next season. The former Division III performer played in just five games during his first two years in the league, delaying his service-time clock.

The Redskins are now down to a 75-man roster. Minutes ago, the Redskins announced that they have placed tight end Derek Carrier on the PUP list and running back Keith Marshall on the reserve/injured list. The team also waived/injured wide receiver Reggie Diggs.

Those three moves were the final ones necessary for the team to comply with the Tuesday afternoon deadline. Earlier in the day, the Redskins released two notable defensive veterans in defensive end Stephen Paea and linebacker Perry Riley Jr. The Redskins’ current inside linebacker situation has Will Compton and Mason Foster as the starters with Martrell Spaight and Su’a Cravens among the backups. On the D-Line, the team’s recent signing of Cullen Jenkins made Paea expendable.

Here are some notes from the NFC just before Week 2 of the preseason continues.

5:33pm: According to Barrows (via Twitter), the pick the 49ers acquired from Washington in the Carrier swap is for 2017, not 2016. Meanwhile, Ian Rapoport of NFL.com tweets that the Bears and Saints were also in the mix for Carrier before the Niners shipped him to D.C.

5:05pm: The 49ers have traded a tight end for the second time this week, according to Matt Barrows of the Sacramento Bee, who reports (via Twitter) that Washington has acquired Derek Carrier from San Francisco. The Niners will get a fifth-round pick in exchange for Carrier, per Barrows.

On Tuesday, armed with a ton of tight end depth, the 49ers sent Asante Cleveland to the Patriots in exchange for offensive lineman Jordan Devey. At the time, Matt Maiocco of CSNBayArea.com reported that both Cleveland and Carrier had been receiving trade interest, and since neither player was viewed as a lock to make San Francisco’s roster, it makes sense that they’d be traded.

Carrier, 25, saw his first real regular-season action on offense last year for the Niners, appearing in 11 games and grabbing nine balls for 105 yards. In Washington, he’ll have a clearer path to playing time, as the team will be without Niles Paul and Logan Paulsen this season — both players have sustained season-ending injuries during the preseason.

For their part, the 49ers will be hoping Carrier gets plenty of playing time in Washington. According to Barrows (via Twitter), the fifth-round pick San Francisco gets in the deal is a conditional selection. So if Carrier doesn’t reach certain thresholds for playing time and production, the Niners figure to get a lesser pick.