The Patriots are making headway on their 2020 draft class. They’ve signed third-round pick Devin Asiasi, according to Aaron Wilson of the Houston Chronicle (on Twitter). 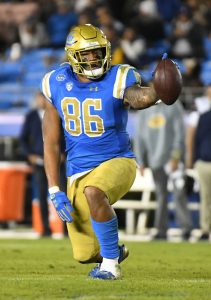 On Day 3, the Pats moved up from No. 100 to the Raiders’ No. 91 choice for the UCLA product. With Asiasi, they filled a major need at tight end and netted their first offensive player of the weekend.

Asiasi offers speed and solid blocking technique, but scouts say he needs to spend some time in the gym in order to adjust to the pro game. He could wind up as the Patriots’ No. 1 tight end, ahead of Matt LaCosse, Ryan Izzo, and fellow third-round pick Dalton Keene. Then again, there are several notable vets left in free agency and the Patriots could explore their options between now and the start of the season.

With Asiasi officially in the fold, the Patriots have now signed seven of their ten draft picks. The only rookies left to sign are second-round safety Kyle Dugger, third-round tight end Dalton Keene, and sixth-round guard Michael Onwenu. Here’s the full rundown, via PFR’s tracker:

Patriots Trade Up To Raiders’ No. 91, Draft TE Devin Asiasi

The Patriots swung a deal to move up to the Raiders’ No. 91 overall pick, bringing them back into the third round.

With the 91st pick, the Patriots selected tight end Devin Asiasi, their first offensive player of draft weekend. Asiasi offers speed and good blocking technique, but scouts say he needs to spend some time pumping iron in order to adjust to the pro game.

The UCLA product figures to play a key role for the Pats in 2020, but you can expect them to explore veteran options between now and the start of the season. Trey Burton, Jordan Reed, and Charles Clay are among the free agent tight ends still left on the market.