One of Matt Rhule‘s right-hand men is leaving the Panthers. Joseph Person of The Athletic reports (via Twitter) that vice president of football operations Sean Padden has left the organization “to pursue other opportunities.”

Padden had worked alongside Rhule since 1998 when the two were at Albright College (h/t to Charean Williams). The duo moved on to Temple starting in 2013, and they later joined Baylor, where Padden served as the Associate Athletic Director for Football Operations. When Rhule was hired as the Panthers new head coach in 2020, Padden soon followed.

The Panthers made another front office move today, promoting Mike Anderson to director of football operations. The executive had previously served as the Panthers assistant director of operations, and he’s been with the organization since 2010. He’ll be taking over the role previous held by Bryan Porter.

Although the Panthers and Jets had discussed a Sam Darnold trade for a bit, the talks centering around a trade that became official Monday heated up last week. Joe Douglas and Scott Fitterer discussed Darnold at Ohio State’s pro day on March 30, Joe Person of The Athletic tweets. Other teams contacted the Jets on Darnold ahead of free agency, but during the time Douglas and Co. methodically evaluating this year’s draft-eligible quarterbacks, some would-be suitors moved on. By late last week, the Panthers were the last team left standing that would trade for Darnold, Ian Rapoport of NFL.com notes (video link). The Jets sought a package similar to the one the Cardinals received for fellow 2018 top-10 QB Josh Rosen, wanting a second-round pick and another mid-round pick or a player, according to Albert Breer of SI.com. (The Dolphins sent the 2019 No. 62 overall pick to the Cardinals for Rosen.) The Jets also proposed a pick-swap trade that would have sent Darnold and No. 23 to Carolina for No. 8, per Breer. The Panthers shut off that path but agreed to send a 2021 sixth, a 2022 second and a 2022 fourth for the former No. 3 overall pick. The Jets now have nine picks in Rounds 1 and 2 between this draft and next.

Here is more from the latest 2021 QB domino falling Monday:

The Panthers ended their expansive GM search by hiring longtime Seahawks executive Scott Fitterer. While this will be a key jump for the veteran personnel man, he will transition from one organization where the head coach has considerable power to another. 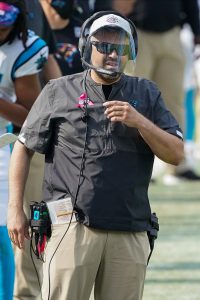 Matt Rhule confirmed he will have control of Carolina’s roster, though the second-year HC indicated Fitterer will obviously have tremendous responsibilities in this area as well.

“I think in terms of on the contract, a lot of those things probably rest with me,” Rhule said, via Darin Gantt of Panthers.com. “But that’s not something I’m real interested in. I think it’s kind of a formality. Scott’s here to run the personnel. He’s here to build the roster. He’s here to establish the draft process. I think some things are written into the contract, but I think we’re going to work collaboratively and work together.”

Fitterer likened this situation as a Seahawks-esque partnership, where Pete Carroll and John Schneider work in tandem. Though Carroll maintains final say, which led to the Lions considering a Schneider pursuit earlier this year.

“In the beginning, Pete was really in charge. But through no egos and the collaboration and the trust and the deep conversations they’ve had, Pete has opened up, and it’s really a partnership. It’s really a marriage between the two, and I’ve never seen an argument between them,” Fitterer said.

“They can challenge each other; they can have discussions. But in the end, they’ve always been in lockstep, and I think that’s important for a GM and a coach to have. That’s what I think it’s going to be like here. Matt’s been great so far, and it’s only going to grow from here.”

Panthers owner David Tepper indicated he sought an experienced exec who could help Rhule while he acclimates to the NFL. Fitterer having worked with Carroll as he transitioned back to the pro game was a factor in the hire as well, Joe Person of The Athletic tweets. The Panthers gave Rhule a seven-year, $63MM deal in 2020, so it certainly makes sense they will entrust him with their biggest decisions.

Fitterer stopped short of committing to Teddy Bridgewater as the Panthers’ 2021 starter, though the new GM was not specific regarding many players. Fitterer did say he sought a quarterback “who could win with the game on the line in the fourth quarter,” and as ESPN.com’s David Newton points out, Bridgewater was 0-8 in games in which he had a go-ahead or game-tying drive chance on the final possession.

The Panthers are set to make a run at Deshaun Watson, if the Texans make him available. They also have the No. 7 overall pick, putting them in position to draft Bridgewater’s eventual successor.

Trade-downs may well be coming to the Panthers soon. The Seahawks have consistently used their late-first-round draft perches to move down and accumulate capital. Fitterer said a line of demarcation between drafts’ top-tier and second-tier prospects usually falls around picks 16-18 and that there are not major talent disparities between players who fall between Nos. 25-40 on respective big boards (Twitter link via Person). This approach, which will not apply this year considering the Panthers pick seventh, will come not long after the franchise went five drafts (2013-17) without ever trading down under Dave Gettleman.

Dwayne Haskins will have his first visit since being unceremoniously cut by Washington last month. NFL.com’s Ian Rapoport reports (via Twitter) that the former first-round quarterback will meet with the Panthers on Monday. We had previously heard of Carolina’s interest, but there was no word on potential visits. 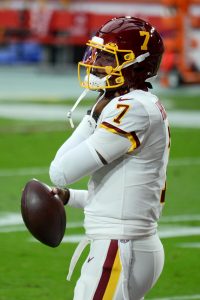 Rapoport describes the meeting as “a fact-finding mission for both sides.” As Joe Person of The Athletic observes on Twitter, the timing is a bit interesting for the Panthers, as the team is currently operating without a general manager. While Matt Rhule previously said he doesn’t want control over personnel decisions, Person believes the head coach may be pushing for this move. Rhule has known Haskins since the quarterback was in high school, and Haskins’ college coach, Ryan Day, previously coached alongside Rhule at Temple.

Further, the Panthers have some question marks at quarterback, so the organization may simply be doing their homework on low-risk acquisitions (Rapoport notes that teams would “likely only pay Haskins the minimum”). Teddy Bridgewater didn’t complete his final appearance of the 2020 season, and Rhule declared that the veteran would need to have a “tremendous offseason” (via NFL.com’s Kevin Patra) in order to definitively retain his gig.

Before getting cut, Haskins was averaging 6.3 yards per attempt with 12 touchdowns and 14 interceptions in 16 games and 13 starts for Washington. After getting waived, Haskins mutually parted ways with agent David Mulugheta, and he’s since caught on with Goal Line Football agency.

While the Panthers and Cam Newton are clearly parting ways, Jeremy Fowler of ESPN reports the team may have been open to a reunion. A source tells Fowler that Carolina was open to bringing Newton back for the 2020 season, but was unwilling to extend his contract, something they expected him to want. Instead, the team signed free-agent quarterback Teddy Bridgewater to a three-year, $60MM contract that gives them a proven starter with long-term flexibility.

Here are some more notes from around the Panthers organization: