As expected, Cowboys tight end Blake Jarwin has been diagnosed with an ACL tear (Twitter link via NFL.com’s Ian Rapoport). On the plus side, the MRI showed a “clean tear” for the 26-year-old with no other major issues in his right knee. 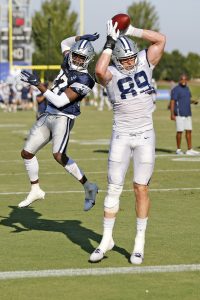 The Cowboys re-upped Jarwin on a three-year, $24.25MM extension back in March so he won’t have to worry about marketing himself to teams after a lost season. In 2019, Jarwin reeled in 31 catches for 365 yards (both career highs) and three touchdowns. Between ’18 and ’19, Jarwin has totaled 58 receptions for 678 receiving yards and six scores.

With Jason Witten out of the picture, the Cowboys are left thin at the position. Blake Bell, a blocking tight end who signed a cheap deal back in March, and 2018 fourth-rounder Dalton Schultz are the next two guys up. Neither has topped 186 yards in their respective pro careers.

It stands to reason that the Cowboys will explore some of the available out-of-house options that remain on the market. Delanie Walker, a 36-year-old vet with ample experience, headlines the current crop of free agent TEs. Other available notables include Charles Clay and Clive Walford. 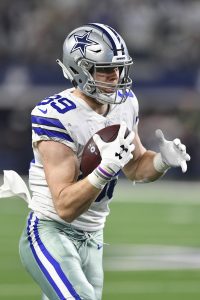 Sources tell Ian Rapoport and Mike Garafolo of NFL.com that tight end Blake Jarwin has agreed to a three-year deal to remain with the Cowboys for up to $24.25MM with $9.25MM in guarantees.

Jarwin was an undrafted free agent out of Oklahoma State in 2017 who earned his way onto the Cowboys practice squad, before a mid-season promotion brought him to the 53-man roster. While he only appeared in one game (and recorded no statistics) as a rookie, over the past two seasons, Jarwin has made 58 receptions for 678 receiving yards and 6 touchdowns.

The return of Jason Witten last season likely cut into what would have been an even larger role for Jarwin last season in Dallas. Still just 26, the Cowboys clearly have high hopes for him to develop in a frontline contributor as his new deal pays him in line with a mid-tier starter.

The Cowboys are not eager to see Blake Jarwin get away via restricted free agency and will take some precautions to ensure the fourth-year tight end stays in Dallas next season.

Jarwin is expected to receive a second-round RFA tender, Todd Archer of ESPN.com reports. The Cowboys also met with Jarwin’s agent at the Combine and discussed an extension.

A UDFA find in 2017, Jarwin has 58 receptions for 672 yards over the past two seasons. He operated behind Jason Witten in 2019, but Mike McCarthy may have bigger plans for the young target. This also represents the latest sign Witten will need to relocate to play a 17th season.

On a second-round tender, Jarwin would be in line to earn approximately $3.3MM next season. That would be a substantial raise from the league minimum, which he made for three seasons. Witten has said he is not planning another retirement just yet and would be prepared to leave Dallas if necessary. The sight of the future Hall of Fame tight end in another uniform appears imminent.

Chiefs wide receiver Sammy Watkins is expected to play in today’s divisional playoff game against the Colts, reports ESPN’s Adam Schefter (via Twitter). The wideout was listed as questionable with a foot injury.

The 25-year-old had only appeared in a single game since injuring his foot in Week 9, but he was able to practice throughout the week. When healthy, Watkins has managed to play a relatively big role in the Chiefs offense. In 10 games (nine starts) this season, the receiver had hauled in 40 receptions for 519 yards and three touchdowns.

With Watkins back in the mix, Chris Conley and Kelvin Benjamin will find themselves sliding down the depth chart.