John Brown is going to Las Vegas. On Wednesday, the wide receiver agreed to a one-year, $3.75MM deal with the Raiders, as Adam Caplan of SiriusXM tweets.

Brown will help replace Nelson Agholor, who inked a surprisingly lucrative deal with the Patriots. The Raiders are also down Tyrell Williams, who was cut early on in the offseason. Brown will come into camp as a supporting member of the new-look group, which includes Henry Ruggs, Hunter Renfrow, and Bryan Edwards.

In 2019, Brown’s first season with the Bills, he managed new career highs of 72 catches for 1,060 receiving yards. Last year, he was limited just nine games and finished with a 33/458/3 stat line. The Bills went on to release him, saving nearly $8MM against the 2021 salary cap.

John Brown has a couple of teams in mind. This week, the free agent wide receiver told SiriusXM (Twitter link) that he sees the Steelers and Colts as solid fits.

“It depends who needs receivers,” Brown said. “You know, the Pittsburgh Steelers, Big Ben is definitely good with the deep ball, and the Indianapolis Colts, [I’ve noticed] the way they use T.Y. Hilton. When we played those guys in the playoffs last year I walked off and I’m like, this team, they’re up and coming, they’re going to be a problem in the next few years.”

“So, you know, I got options, I feel like I would fit in anywhere, but those are just the main two off the top [of my head]. Anywhere I can come in and help and be a small piece to the puzzle, or if they need me to be a big piece to come in and help younger guys out and move around and do what I have to do. Those are the main two teams, though.”

The Colts would make plenty of sense for Brown. As the former Bills standout eluded to, Hilton is out of contract, and Brown could take his place on the depth chart. The Steelers, meanwhile, will probably have bigger needs to address, even if JuJu Smith-Schuster goes elsewhere.

In 2019, Brown’s first season with the Bills, he managed new career highs of 72 catches for 1,060 receiving yards. Last year, he was limited just nine games and finished with a 33/458/3 stat line. It wasn’t the ideal platform year for Brown, though he didn’t know that it would be his walk year at the time. The Bills released Brown on Wednesday; the veteran says the move came without warning.

The Bills have released wide receiver John Brown and defensive lineman Quinton Jefferson, per a club announcement. The release of Brown will save $7.9MM against the cap with $1.6MM left in dead money. Meanwhile, Jefferson’s release will save $6.5MM with no dead money left over.

Brown started his Bills tenure with a bang, compiling 72 receptions for 1,060 receiving yards, both career highs. Last year, knee injuries, ankle issues, and a stint on the COVID-19 list limited him to just nine games. The 30-year-old (31 in April) finished 2020 with just 33 grabs for 458 yards and three touchdowns, so his release doesn’t come as a huge surprise. All in all, Brown totaled 105 catches, 1,518 receiving yards and nine TDs for Buffalo across two seasons.

Jefferson, meanwhile, was set to enter his second year with the Bills. Last year, he scored a two-year, $13.5MM deal — higher than most expected after serving as a part-time starter in Seattle. His final two years with the Seahawks saw a total of 51 tackles and 6.5 sacks. In Buffalo, he notched 23 stops, three sacks, and one forced fumble.

In a related move, defensive lineman Vernon Butler has agreed to a pay cut in order to keep his spot on the roster (Twitter link via NFL.com’s Ian Rapoport). Originally, Butler was set to count for $7.8MM against the cap with $5.5MM in base pay. Terms of the new deal have not been disclosed.

The Bills didn’t end up landing Antonio Brown, but they are bringing in a receiver. Buffalo is going to sign John Brown, a source told Peter Schrager of NFL Network (Twitter link). 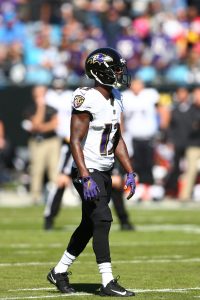 Adam Schefter of ESPN.com followed up with a tweet reporting that Brown will get $27MM over three years. Brown comes to the Bills from the Ravens, where he spent the 2018 season after inking a one year deal. Brown will provide an immediate upgrade to the Bills’ weak receiving corp, and will be a great asset for Josh Allen as he continues to develop as a passer. Buffalo’s leading receiver last year was Zay Jones, which wasn’t going to cut it moving forward.

Brown will provide a much-needed deep threat for Buffalo’s offense, and he’s still one of the fastest receivers in the league. Brown was always high on talent, and showed flashes during his years with the Cardinals. He broke out with 1,003 yards and seven touchdowns in 2015, but struggled with injuries and inconsistency the next couple of years.

He got off to a really hot start in Baltimore, and revitalized his career last year. He showed an instant connection with Joe Flacco, and had at least 85 yards in four of his first seven games. His production really dropped off the second half of the season, but only because Lamar Jackson took over at quarterback and the team stopped throwing deep as much. Brown is still only 28, and will immediately slide in as Buffalo’s best receiver.

It’s a four-year deal with a fifth-year option for the Packers and Matt LaFleur, a source tells Tom Pelissero of NFL.com (on Twitter). LaFleur is a fast riser who is becoming a head coach for the very first time, but he appears to have solid job security in Green Bay. The financial terms of the deal are not yet known, but it would not be a surprise if he was on the lower end of the scale given his age and lack of experience at this level.

Here’s more from the North divisions:

The Ravens have agreed to terms with free agent wideout John Brown, according to Adam Schefter of ESPN.com (Twitter link). Baltimore was reportedly in advanced talks with Brown, a former Arizona Cardinal, as of earlier today.

Brown will receive a one-year deal, per Adam Caplan of SiriusXM (Twitter links). The base value of his new contract is $5MM, but he’ll have the chance to max out at $6.5MM via incentives.

Baltimore is in dire need of wide receivers, as Mike Wallace is a free agent while fellow veteran Jeremy Maclin has been mentioned as a candidate for release. With limited cap space, however, the Ravens were forced to sit and watch as top-tier pass-catchers such as Allen Robinson, Sammy Watkins, and Marqise Lee came off the board.

Brown is coming off the worst season of his NFL tenure, as injuries limited him to just ten games. During that time, Brown managed only 21 receptions for 299 yards and two scores. As recently as 2015, however, the now 27-year-old Brown put up 65 catches for 1,003 yards and seven touchdowns, and he’s reportedly healthy.

Heading into free agency, PFR ranked Brown as the 10th-best available wide receiver. He reportedly generated interest from at least seven clubs before inking his pact with the Ravens.