END_OF_DOCUMENT_TOKEN_TO_BE_REPLACED

The Saints are expected to sign free agent tight end A.J. Derby, according to Herbie Teope of The Advocate (Twitter link). Offensive lineman Nate Wozniak will be waived in a corresponding move. 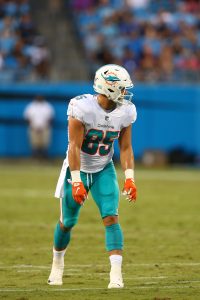 New Orleans currently has six tight ends on its roster, but two of them — Garrett Griffin and Alize Mack — are dealing with injuries, so the club is aiming to add a bit more depth by bringing Derby onto the roster. Veteran Jared Cook, who inked a two-year, $15MM contract with the Saints during the offseason, will be the team’s starter, but Josh Hill should still see a relatively large role after playing on more than 60% of New Orleans’ offensive snaps in 2018.

Derby, 27, has bounced around the NFL since entering the league as a Patriots sixth-round pick in 2015. The Arkansas product’s most significant action came in 2017, when he racked up 21 catches on 40 targets while splitting time between the Broncos and Dolphins. Last season, Derby appeared in four games and managed three receptions for Miami before being placed on injured reserve in December.