It didn’t take long for Nick Vannett to find a new home. The free agent tight end is signing with the Saints, reports NFL Network’s Mike Garafolo (via Twitter). Vannett got a three-year deal from New Orleans. 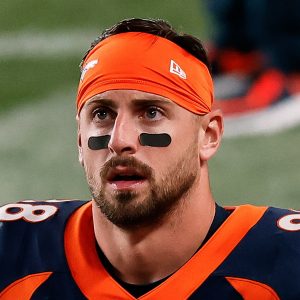 The 28-year-old tight end spent the first three-plus seasons of his career with the Seahawks, including a 2018 campaign where he put up some of the best offensive numbers of his career. That season, Vannett finished with 29 receptions for 269 yards and three touchdowns.

He was traded to the Steelers during the 2019 season, and he signed a two-year deal with the Broncos last offseason. Over the past two years, Vannett has mostly served as a blocking tight end, and he finished this past year with 95 yards from scrimmage and one score. Denver moved on from the veteran yesterday, saving the team $2.68MM against the salary cap with $875K left in dead money.

The Broncos have released tight end Nick Vannett, as Mike Klis of KUSA tweets. The move will save the Broncos $2.68MM against the salary cap with $875K left in dead money.

Vannett recorded 14 receptions for 95 yards with a touchdown across 15 games last year. He was deployed mainly as a blocking TE, as has been the case for most of his career. He was involved in the Seahawks’ passing offense for a time, however. In 2018, Vannett turned 43 targets into 29 catches for 269 yards.

Vannett will now look for work elsewhere as he enters his sixth NFL season. Meanwhile, the Broncos will look to replace his blocking via free agency or the draft. Currently, their tight end depth chart is headlined by Noah Fant and Albert Okwuegbunam, who are used more as pass-catchers.

The Broncos will add another player to their skill-position corps. They are signing former Seahawks and Steelers tight end Nick Vannett, Ian Rapoport of NFL.com reports (on Twitter). 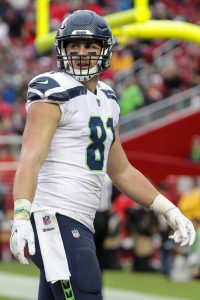 Vannett and the Broncos agreed on a two-year deal, per Rapoport. The pact is worth $5.7MM, Mike Klis of 9News tweets, with $2.5MM guaranteed.

Statistically, Vannett’s best season came in 2018, when he caught 29 passes for 269 yards and three touchdowns. He, however, graded as Pro Football Focus’ third-worst 2019 tight end and has not thus far justified the Seahawks’ Day 2 draft investment. His primary skill being blocking, however, figures to help in what will be an interesting tight end competition in Denver.

Butt has now suffered three ACL tears and has not played since early in the 2018 season. Beyond Fant, the Broncos look set to hold a crowded competition whenever they reconvene for workouts.

Vance McDonald‘s injury has prompted the Steelers to act quickly. Pittsburgh has agreed to acquire tight end Nick Vannett from Seattle, Adam Schefter of ESPN.com tweets. The Steelers will send a 2020 fifth-round pick to the Seahawks for Vannett, Tom Pelissero of NFL.com tweets. That pick came from Jacksonville in this month’s Joshua Dobbs trade, as Bob Condotta of the Seattle Times tweets, so the Steelers effectively traded Dobbs for Vannett.

This marks the second straight week the Steelers have made a trade, this lower-profile move coming after Pittsburgh sent its 2020 first-round pick for Minkah Fitzpatrick.

A former third-round pick out of Ohio State, Vannett is in a contract year. He caught 29 passes for 269 yards and three touchdowns with Seattle in 2018, which was by far his most productive statistical year. Vannett, 26, has four catches for 38 yards this season. He will join a Steelers roster that houses McDonald, blocking tight end Xavier Grimble and rookie fifth-round pick Zach Gentry.

McDonald is battling a sprained shoulder, Ian Rapoport of NFL.com tweets. He was spotted with the shoulder in a sling Tuesday, though RapSheet adds this is not expected to sideline Pittsburgh’s starter for long. But it’s clear the Steelers are serious about having an experienced tight end to pair with Grimble, and thus adding more help for Mason Rudolph, while McDonald is out.

Interestingly, this leaves the Seahawks with one tight end on their active roster, Will Dissly. While the second-year player has flashed in limited work, he missed 12 games as a rookie due to a severe knee injury. Seattle will certainly address this new roster need in the coming days.

The Steelers have now dealt their 2020 first-, third- and fifth-round picks, while the Seahawks have extra ’20 selections in the second and fifth rounds. 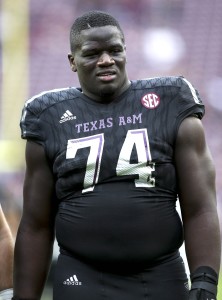 Seattle locked up a pair of Day 2 picks earlier this week, agreeing to deals with second-round defensive tackle Jarran Reed and third-round offensive lineman Rees Odhiambo. After securing those four players, the Seahawks still have to sign six more players from this year’s 10-man draft class, but none of those contracts should be particularly difficult to negotiate.

Ifedi, who was selected with the 31st overall pick after the Seahawks traded down from No. 26, figures to compete for a spot on Seattle’s offensive line immediately, either at guard or right tackle. Because the Patriots didn’t have a first-round pick this year, the former Texas A&M tackle represented the final pick of the 31-player first round, and will therefore be the last 2016 draftee eligible for a fifth-year option on his rookie contract.

According to Over the Cap’s data, Ifedi’s four-year rookie deal should be worth about $8.265MM, with a $4.211MM signing bonus. The value of his fifth-year option for 2020 won’t be determined until 2019, when the Seahawks will have to make a decision on whether to exercise or decline it.

After trading down a few weeks ago, could the Dolphins trade back up? Miami will consider moving up from No. 13 in order to grab either Ohio State running back Ezekiel Elliott or UCLA linebacker Myles Jack, multiple sources tell Armando Salguero of The Miami Herald. Moving up from No. 13 to the top ten can be pricey, but top exec Mike Tannenbaum has said that he would be open to such a move for the right player.

Here’s are the latest NFL Draft rumors out of the AFC:

Perhaps the most polarizing player in 2016’s prospect pool, Robert Nkemdiche drew the tag of the defensive lineman most likely to be a bust among scouts surveyed by Bob McGinn of the Milwaukee Journal Sentinel.

Although one scout referred to the former Ole Miss standout as a “flash player … with disaster written all over him,” in a statement relating to the former No. 1 overall recruit’s on-field abilities, it’s an old-school sentiment among scouts and executives that has decision-makers concerned.

Of the scouts interviewed, 11 of the 18 singled out Nkemdiche as the biggest bust candidate and some offered the lineman’s wider range of interests and his background as reasons why football won’t matter as much to him. Nkemdiche’s mother is a diplomat who often works in Nigeria and his father works as a cardiologist.

“He’s like a lot of kids from this generation. He’s grown up in some privilege, and that family is involved with so many different endeavors. You’re not going to get rid of that,” a scout told McGinn. “He doesn’t just think football, football, football 24/7. That’s not always the most attractive guy from a football standpoint. Coaches like them a little bit better if it’s football 24/7.”

The Jets have been eyeing linebackers Reggie Ragland (Alabama) and Kamalei Correa (Boise State) in recent days, according to Tony Pauline of WalterFootball.com. Ragland, specifically, would act as a future replacement for veteran David Harris, but he could be in play as high as pick No. 13 to the Dolphins. However, Washington and the Packers are seen as the most likely landing spots for Ragland, per Pauline.

Let’s take a look at some more draft rumors, all courtesy of Pauline…

The notion that Myles Jack‘s surgically repaired knee is a “time bomb” is greatly exaggerated, sources tell CBS Sports’ Jason La Canfora, who writes that the torn meniscus the UCLA linebacker suffered last year should not meaningfully alter his draft stock. “This kid is a great player. His change of direction is awesome. This is getting totally blown out of proportion,” said an executive. All the teams La Canfora spoke with indicated that Jack won’t last beyond the top 15. The Jaguars, who hold the fifth selection, “seem locked into” Jack, says ESPN’s Mel Kiper (Twitter link via Ryan O’Halloran of the Florida Times-Union).

More of the latest draft rumors:

Let’s take a look at some of today’s draft rumors. We will update this page as necessary throughout the day: