A former third-round Washington draftee, Moreau played in the slot and outside at points with his original team. The Falcons, who added longtime Washington exec Kyle Smith to their front office this year, will bring in Moreau to help their secondary.

Moreau will join a secondary that fared poorly in Dan Quinn and Raheem Morris‘ final seasons with the Falcons. The Falcons ranked last in pass defense in 2020. They have a young group of corners, headed by 2020 first-round pick A.J. Terrell, due back but certainly will need some outside help going into Dean Pees‘ first season as DC.

After Moreau enjoyed a steady gig for the 2018 and ’19 Washington squads, Ron Rivera reduced his role last season. The UCLA product played just 15% of Washington’s defensive snaps in 2020. Washington was still believed to be interested in re-signing Moreau, per ESPN.com’s John Keim (on Twitter). Instead, Moreau will head to Atlanta looking to bounce back. He should be expected to see more frequent playing time than he did last season. 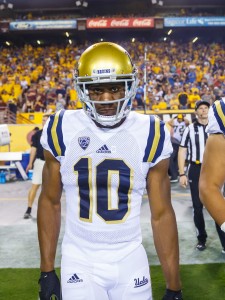 Moreau, a UCLA product was considered a late first-round or early second-round prospect before tearing his pectoral during the predraft process. Following the injury, Moreau fell to the 81st overall pick, but should still have a chance to compete for playing time during his rookie campaign pending the speed of his recovery. Washington’s cornerbacks behind Josh Norman currently include Bashaud Breeland, Quinton Dunbar, Kendall Fuller, and Dashaun Phillips.

Here’s a complete overview of the Redskins’ rookie class:

Reports emerged last night that Bears head coach John Fox was unaware of his club’s intention to draft North Carolina quarterback Mitch Trubisky until a “couple hours” before the draft. GM Ryan Pace subsequently denied those reports, saying his head coach is involved in all of the team’s decisions.

“John is involved in every decision deeply. The respect I have for John is enormous, especially his experience and all of the players that he’s been with. I think if you look back — and we talked about this — I think a lot of it was kept secret I thought we did a good job keeping this thing pretty under wraps, it’s so sensitive. But if you go back to the private workouts that we had, I mean John and I — it’s pretty hard to hide him — but we’re traveling to Chapel Hill and having dinners and workouts with Mitch, so he’s been deeply involved from the very beginning.”

UCLA cornerback Fabian Moreau, a possible first-round pick, had successful surgery to repair a torn pectoral muscle, according to Ian Rapoport and Mike Garafolo of NFL.com (Twitter links). His recovery timetable will be four-to-six months, but one source tells Garafolo that there is some hope he can be ready in time for training camp.

Word of the surgery, of course, will hurt Moreau’s stock. However, if he can really recover within that timetable, he might not fall far. A team willing to be patient might be willing to take the UCLA product somewhere in the second round. Moreau is widely considered to be one of the best cornerbacks in this year’s class, though the overall depth at the position could lead teams in another direction near the top of the draft.

The most recent rankings from NFL.com’s Daniel Jeremiah (before word of the surgery broke) had Moreau as the No. 42 prospect overall and the eighth-best cornerback. ESPN.com’s Mel Kiper and Todd McShay did not have him going in the first round of their latest mock drafts.

Quarterback Nathan Peterman will conduct a private workout for the Eagles next week, and will also meet with the Steelers in April, tweets Jeremy Fowler of ESPN.com. Earlier this year, one scout told Matt Miller of Bleacher Report Peterman has a chance to be the 2017 version of Dak Prescott, a mid-round talent who emerges into a viable starter. Peterman, who transferred from Tennessee to Pitt before the 2015 season, has averaged 2,571 yards and 23 touchdowns over the past two years.

Washington cornerback Sidney Jones underwent surgery today to repair his torn Achilles, according to Adam Schefter of ESPN.com (Twitter link). Jones, who suffered the devastating injury at his Pro Day earlier this month, is expected to resume running in four months. Projected to be selected in the first round before the Achilles tear, Jones himself tweeted today that he’ll be able to play during the 2017 season, though that could certainly be optimistic.

Although some around the league reportedly believe the Texans are the best fit for quarterback Tony Romo, other front office members don’t see the fit, according to Tony Pauline of DraftAnalyst.com. If Romo does land in Houston, the Texans could end up trading fellow signal-caller Tom Savage to the 49ers, per Pauline. San Francisco is known to be in the quarterback market, and have been tied to options like Mike Glennon, Jimmy Garoppolo, and Kirk Cousins.