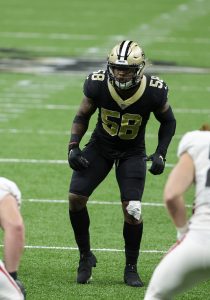 The Saints are about to get some reinforcement. The team designated linebacker Kwon Alexander, defensive end Marcus Davenport, and wide receiver Tre’Quan Smith for return from injured reserve today, reports NFL Network’s Tom Pelissero (via Twitter).

Alexander (elbow) and Davenport (shoulder) were both placed on IR in mid-September, meaning the earliest they could have returned was Week 5.

The Saints moved Davenport back into their starting lineup to start this season, providing the player with an opportunity to re-establish himself opposite Cameron Jordan. Davenport registered a sack and two QB hits in the Saints’ dominant Week 1 win over the Packers.

Alexander worked his way back from a December Achilles tear to be ready in time for the Saints’ opener, but this latest injury continued a rough run of health for the former Buccaneers standout. Alexander suffered a torn ACL in 2018, though he still landed a nice contract from the 49ers. However, the veteran linebacker sustained a pectoral muscle tear in his first 49ers season.

Smith landed on IR a bit earlier than his defensive teammates after suffering a hamstring injury. The injury dogged Smith for several weeks, as he tried and failed to come back from it twice. It caused the former third-round pick to miss extensive training camp time.

While the Saints will happily welcome back this trio, they’ll still be without one of the most notable players. While wideout Michael Thomas was eligible to return from PUP this week, NFL Network’s Ian Rapoport notes (via Twitter) that there hasn’t been any news on his potential activation.

The Saints have converted roughly $1.2MM of Tre’Quan Smith’s base salary into a signing bonus (Twitter link via Field Yates of ESPN.com). The maneuver will also tack four void years on to his deal, though it’ll provide the Saints with an extra $954K in cap space. 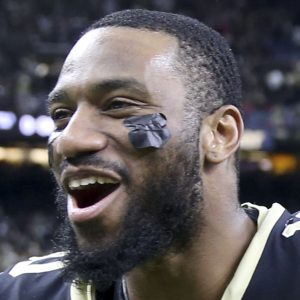 The Saints have yet to see Smith on the field this year thanks to a hamstring injury. The fourth-year wideout could debut as soon as Week 4, but there’s no word yet on his status. Smith was dogged by the hammy for much of the summer — he tried to come back from it prematurely a couple of times but ultimately had to rest it. The Saints hope to have him back in the fold some time after his short-term IR stint is through.

Smith, a former third-round pick, has a chance to break out while Michael Thomas heals up from offseason ankle surgery. Thomas will be out for the first six games, at minimum, since he’s on the PUP list.

Last year, Smith was enjoying a career year up until he was sidelined by his own ankle issue. In 14 games (10 starts), the 25-year-old hauled in 34 receptions for 448 yards and four scores. Since his new void years are only for cap purposes, he remains on course for free agency in the spring.

Jameis Winston‘s debut as the Saints’ starting quarterback will come without another of his top wide receivers. Tre’Quan Smith will begin the season on IR, Nick Underhill of NewOrleans.football tweets.

The Saints added Smith to their injury report Thursday, and the hamstring injury the fourth-year wideout has battled will shelve him for at least three games. Additionally, New Orleans placed veteran cornerback Ken Crawley on IR. Crawley is also dealing with a hamstring malady.

This injury has dogged Smith for several weeks. He has now tried and failed to come back from it twice. It caused the former third-round pick to miss extensive training camp time. It also comes, of course, at a key point for New Orleans’ passing attack, which will feature a new quarterback for the first time in 15 years. Michael Thomas‘ belated offseason ankle surgery will sideline him for at least the season’s first six games; the All-Pro is on the Saints’ reserve/PUP list.

Crawley represents key depth for a Saints team that has been undermanned at corner this year. The team traded for Bradley Roby earlier this week, however. That acquisition, pairing Roby with fellow ex-Ohio State standout Marshon Lattimore, looms larger now.

Thomas and Smith’s absences will leave Drew Brees‘ successor with a much lower-profile receiving corps. Although Marquez Callaway impressed throughout the Saints’ summer work, the team did not draft a wideout this year and has only return man Deonte Harris, third-year UDFA Lil’Jordan Humphrey and veteran Chris Hogan — who recently left the game to give lacrosse another try — at the position. Running back/wideout Ty Montgomery remains on New Orleans’ roster, and Kevin White resides on the team’s practice squad. 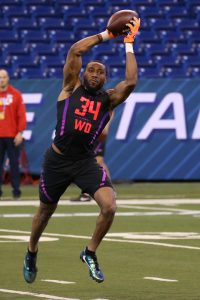 The Saints announced the signing of third-round wide receiver Tre’Quan Smith. With that deal done, the Saints now have all of their draft picks under contract.

Smith, a 6’2″ receiver out of UCF, was the Saints’ second-highest pick in this year’s draft class thanks to their 2017 deal with the Niners that allowed them to select running back Alvin Kamara. Although there were players the Saints would have liked to have at No. 59 overall this year, it’s safe to say the trade was worthwhile.

Heading into the draft, many viewed Smith as a fourth or fifth-round prospect. The Saints clearly did not agree with that assessment as they grabbed him late in the third. Armed with a quick first step and a freakish wingspan, the Saints believe that Smith can be molded into a quality contributor.

Here’s a look at the Saints’ complete 2018 draft class:

You can view every team’s 2018 draft class and the contractual status of its rookies with PFR’s Results By Team tracker.