The Patriots have signed RB Robert Martin and LB Scooby Wright, according to ESPN’s Mike Reiss (Twitter links). Both players practiced with the team today.

Martin, who spent 2014-17 at Rutgers, will add depth for New England, as Damien Harris is dealing with minor injuries and the team isn’t likely to play any of its top running backs in its fourth preseason contest. The franchise worked out former Washington State running back James Williams before signing Martin, as Doug Kyed of NESN relays.

Wright was a seventh-round pick in the 2016 draft. He’s played for the Browns and Cardinals in addition to briefly playing in the failed AAF league.

The Patriots are signing linebacker Brandon King to a 2-year extension, a source tells Ian Rapoport of NFL.com (on Twitter). King will earn $3.5MM over the course of the two new years, according to ESPN.com’s Mike Reiss (on Twitter). 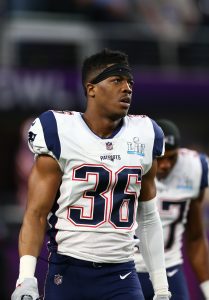 King is a hybrid defensive back and outside linebacker, but hasn’t seen much time at either position. Instead, he has been a key cog in the third facet of the game for the Patriots since joining them as an undrafted free agent out of Auburn in 2015. King has appeared in 57 career games for the Patriots and has already won two Super Bowl rings in his young career.

Last year, King recorded 13 special teams tackles, good for ninth in the NFL. On the Patriots, he was third behind Nate Ebner (15) and Matthew Slater (14).

The Patriots have re-signed defensive back and core special-teamer Brandon King to a two-year that will keep him in New England through 2019, according to Field Yates of ESPN.com (Twitter link). King had been scheduled to become a restricted free agent, but the Patriots opted to give him a new deal rather than tendering him an RFA offer.

King’s new pact is worth $2.6MM in total, reports Ben Volin of the Boston Globe (Twitter link), who adds King will collect a $400K signing bonus, which appears to be the only guaranteed portion of the agreement. Additionally, King will earn base salaries of $775K and $925K in 2018 and 2019, respectively, and can take home a maximum of $250K in per-game roster bonuses in each of the next two seasons.

King, 24, originally entered the NFL as an undrafted free agent out of Auburn in 2015. Since that time, he’s played primarily on special teams, and has never started a game. In 2017, King didn’t see any action on the defensive side of the ball, but he play the fourth-most special teams snaps (235) of any Patriot.

An offseason that featured a near-complete overhaul of the Patriots’ cornerback corps has continued into the season, with the team parting ways with veteran corner Bradley Fletcher, a source informed ESPN.com’s Field Yates (Twitter link).

Fletcher signed a one-year, $2.5MM deal with the Patriots in March, and played in two games for the team this season. He had been dealing with a hamstring injury.

The ailment isn’t believed to be serious, but Fletcher wouldn’t have played against the Cowboys on Sunday, according to Jeff Howe of the Boston Herald (on Twitter).

The Patriots promoted safety Brandon King from their practice squad to fill the roster spot, Mike Reiss of ESPN.com tweets.

New England’s been getting by with a previously maligned cornerback crew after losing Darrelle Revis and Brandon Browner this offseason. The team’s parted ways with several veteran cornerbacks since, but Malcolm Butler, Logan Ryan and Tarell Brown will lead the group against the Cowboys on Sunday.

The 29-year-old corner has started in 54 games in his seven-year career, the latest steady lineup stints coming with the Eagles in 2013-14. Prior to that, Fletcher, a third-round draft choice of the Rams in 2009, started throughout his second season in St. Louis.

Fletcher’s started 54 games in his career.

Reggie Wayne indeed appears among the contingent of cut Patriots, per the team’s official website, but the team’s wide receiver depth chart took another hit, at least from an experience standpoint amid the moves the Super Bowl champions made Saturday.

Brandon LaFell will begin the season on the PUP list, meaning the earliest the veteran can debut Oct. 25 at the earliest. A foot injury kept the starting wide receiver out of training camp, and it likely leaves New England to once again rely on the underwhelming Danny Amendola in the starting lineup.

The Patriots also waived Jonas Gray, he of the four-touchdown performance last season before an alarm clock-related practice absence halted the runner’s momentum.

They cut tight end Asante Cleveland and wideout Jalen Saunders, both of whom they traded for recently, notes Jeff Howe of the Boston Herald (on Twitter).

The rest of New England’s cuts are as follows:

The Patriots announced the signings of a number of rookies today, announcing in a press release that they’ve signed eight of their 11 draft picks, and another seven undrafted free agents. Two of those draft picks – fourth-rounder Tre’ Jackson and seventh-rounder Xzavier Dickson – had their deals previously reported, but six of the names are new, and Aaron Wilson of the Baltimore Sun tweets that a ninth draftee has signed his contract as well.

The following picks have signed their contracts, per the team and Wilson:

Of New England’s 11 draft picks, only first-rounder Malcom Brown and fifth-round long snapper Joe Cardona remain unsigned. In addition to locking up most of their draft class, the Pats have formally inked seven undrafted free agents to deals. Here are those players: