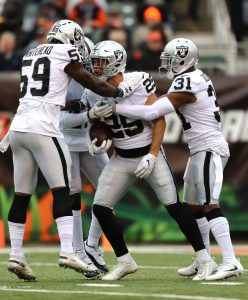 The Raiders and Erik Harris have reached agreement on an extension, as Ian Rapoport of NFL.com tweets. The safety and core special teamer will earn up to $6.5MM on a two-year deal with $2.5MM guaranteed.

Harris was a restricted free agent this offseason and the Raiders initially cuffed him with the low-cost original round tender. Instead, Harris has received a new deal that will keep him under club control through the 2020 campaign.

Harris took the scenic route to the NFL after emerging from the California University of Pennsylvania. After a few seasons with the Hamilton Tiger-Cats of the CFL, Harris hooked on with the Saints on a futures deal. Finally, in 2017, he saw his first live action in the NFL with the Raiders. Then, last season, he impressed head coach Jon Gruden and worked his way into an important special teams role. Harris wound up playing in all 16 games with four starts in 2018. He finished out with 49 tackles, seven passes defensed, and two interceptions.

In other Raiders news, former Oakland cornerback Dominique Rodgers-Cromartie says he’s ending his brief retirement and aims to play in 2019.