The Cardinals have trimmed two quarterbacks from the roster. Signal callers Brandon Doughty and Alek Torgersen were handed their pink slips on Monday afternoon, the team announced. 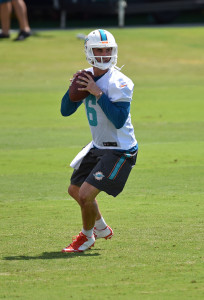 Arizona claimed Doughty and Torgersen off waivers April 5 when they were cut by the Dolphins and Lions, respectively. The It appears the team likes what it has seen from Princeton quarterback Chad Kanoff – a UDFA signing – leading to the release of both players after just one month on the roster.

After the selection of Josh Rosen in April, it seemed very unlikely that either Doughty or Torgersen would make the final cut. The Cardinals plan to start Sam Bradford in Week 1 with Rosen and Mike Glennon in support, giving them the standard three QBs. Kanoff is now positioned to serve as a camp arm for Arizona and appears more likely to be a practice squad signee than a main roster addition.

Torgersen played his college football at Penn before hooking on with the Falcons as a UDFA in 2017. He missed the final cut and hooked on with the Redskins’ taxi squad before finishing out the year in Detroit.

Doughty, a seventh-round pick of Miami in 2016, re-upped with the team on a reserve/futures deal in January before he was cut by the Fins this year. In his final year at Western Kentucky, Doughty completed 71.9% of his passes for 5,055 yards with 48 touchdowns against just nine interceptions.

The Cardinals have added not just one, but two quarterbacks off of the waiver wire. On Thursday, Arizona was awarded QB Brandon Doughty from the Dolphins and QB Alek Torgersen from the Lions, Field Yates of ESPN.com tweets.

The signal callers join starter Sam Bradford and primary backup Mike Glennon on the Cards’ QB depth chart. Of course, the Cardinals will not carry more than three QBs on the final roster, so Doughty and Torgersen will be competing for one spot. There could also be additional veterans or rookies (both drafted and undrafted) thrown into the mix.

Torgersen played his college football at Penn before hooking on with the Falcons as a UDFA in 2017. He missed the final cut and hooked on with the Redskins’ taxi squad before finishing out the year in Detroit.

Doughty, a seventh-round pick of Miami in 2016, re-upped with the team on a reserve/futures deal in January before being handed a pink slip this week. In his final year at Western Kentucky, Doughty completed 71.9% of his passes for 5,055 yards with 48 touchdowns against just nine interceptions.

END_OF_DOCUMENT_TOKEN_TO_BE_REPLACED

Has Ben McAdoo lost control of the Giants? Two unnamed players told Josina Anderson of ESPN.com (Twitter link) that McAdoo is no longer the right coach in New York.

“McAdoo has lost this team,” one of the anonymous players said. “He’s got going 80 percent on Saturdays before we get on a plane to play a game, it’s wild. Changed our off day. He’s dishing out fines like crazy. Suspended two of our stars when we need them most. Throws us under the bus all the time. He’s ran us into the ground and people wonder why we’ve been getting got.”

The Giants are 1-7 heading into Sunday’s game against San Francisco.

Hue Jackson‘s record with the Browns is now 1-22, and that has naturally led to questions regarding the head coach’s job security. While Jackson might not have the support of the team’s brass, one of his fellow NFL head coaches believes the team is in good shape.

“Hue is a heck of a football coach,” said Vikings coach Mike Zimmer (via Nate Ulrich of Ohio.com). “He’s tough. He’s smart. He’s a great competitor. I know that it’s taking him a little bit longer than what he has anticipated, but he’s going to get that thing turned around. That’s the kind of guy he is. He will never stop or relax until he gets it all right.

“Really, they are not that far away. They are really good on defense, and they just turn the ball over offensively.”

Jackson and Zimmer previously coached together in Cincinnati, and they served as the coordinators for the 2007 Falcons. The Browns will be seeking their first win of the season when they play the Vikings tomorrow in London.

Mike Pouncey‘s season is over. After wrestling with how to handle their injured center, the Dolphins will place Pouncey on IR following his meeting with a specialist early Tuesday morning, Armando Salguero of The Miami Herald writes. 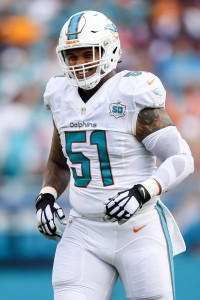 The Dolphins feared that Pouncey would do further damage to his surgically-repaired hip if he continued to play this year. And, if they left the decision up to him, he probably would have let his competitive nature overrule the long-term view. Miami took the decision out of the Pro Bowler’s hands, which will hopefully allow him to return pain-free in 2017. Right now, the belief is that his injury is not career-threatening, despite previous reports to the contrary.

Now that the Dolphins have an open roster spot, they are likely to use that room to sign a quarterback. With Ryan Tannehill likely out of action this weekend, Miami will need a backup QB behind Matt Moore. In theory, the team could promote seventh-round rookie Brandon Doughty from the practice squad to fill that role, but Salguero hears that they are more likely to go out-of-house.

The Dolphins are taking the long view with Pouncey, but their season is far from over. According to Five Thirty Eight, the 8-5 Dolphins have a 27% chance of making the playoffs.