The Raiders waived kicker Matt McCrane, according to Matt Schneidman of the San Jose Mercury News (on Twitter). To replace him, the Raiders signed Daniel Carlson.

The Raiders signed McCrane after losing Mike Nugent to a hip injury, but he didn’t kick like Nugent in his three games with the team. He went 5-for-9 on field goal tries, and just 2-for-6 when subtracting chip shots from 20-29 yards out.

Carlson has had his own struggles this year. The fifth-round pick of the Vikings missed three field goals in Week 2, and was quickly dropped by Minnesota.

Carlson will make his Raiders debut on Sunday when the Colts travel to Oakland.

Zane Gonzalez isn’t the only young kicker whose rough Week 2 will cause a relocation. The Vikings are cutting ties with fifth-round rookie Daniel Carlson, Tom Pelissero of NFL.com tweets. 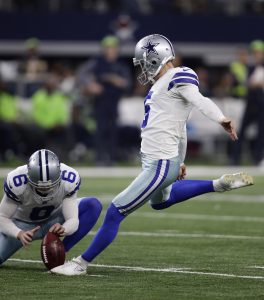 In Carlson’s place, the Vikings will go with experience by signing Dan Bailey, Ian Rapoport of NFL.com tweets. Bailey figured to draw interest from multiple teams after kicking issues impacted multiple games on Sunday, and he’ll join up with a Super Bowl contender.

While interest came Bailey’s way, it appears he was willing to wait for the right opportunity. Four teams offered Bailey a contract, Adam Schefter of ESPN.com reports (on Twitter). A dome team coming off an NFC championship cameo piqued his interest.

The second-most accurate kicker in NFL history, Bailey did not make the Cowboys’ active roster. Salary concerns helped lead him out of Dallas. He’ll be in Minneapolis in time for Week 3 and can be expected to provide more consistency than Carlson gave the veteran-laden Vikings roster.

That said, the Vikings are cutting the cord on a young kicker quite early. Minnesota drafted Carlson to lead to a Kai Forbath cut. The Vikings had just re-signed Forbath this offseason but jettisoned him for Carlson this summer. Carlson will be an interesting waiver item for a team keen on seeing if the coveted Auburn prospect can quickly rebound.

Carlson missed three field goals in Minnesota’s 29-29 tie in Green Bay, the last of which coming from just 35 yards out. Two misses occurred in overtime.

The Vikings’ kicking competition is over. The club has released Kai Forbath, according to a team announcement. The Vikings will now turn to rookie Daniel Carlson as their kicker.

The Vikings traded up into the fifth round to draft Carlson in the spring, an indicator that a kicking change was in the cards. After months of impressive performances, the Vikings feel that the youngster is ready for the job.

Last year, Forbath converted 32 of his 38 field goal attempts and he nailed 34 of his 39 extra point tries. He was re-signed in March, but it was a low-cost deal with little or no guaranteed money, so the release won’t have any real effect on the Vikings’ cap.

Carlson, an Auburn product, converted 92 of 114 field goal tries (80.7%) over the course of his four-year collegiate career. He also nailed all 198 of his extra point tries.