Casey Hayward is sticking around Los Angeles for the foreseeable future. Ian Rapoport of NFL.com reports (via Twitter) that the Chargers have inked the cornerback to a three-year, $36MM extension. The deal includes $20MM in guaranteed money. 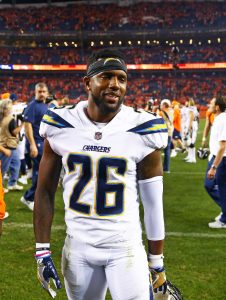 As Michael David Smith of ProFootballFocus.com points out, Hayward still had a year left on his contract, but the Chargers ultimately ripped up the old deal and locked their top cornerback up through 2020. Rapoport tweets that Hayward will earn $15.75MM in the first year of the contract. The Pro Bowler was set to account for a $5.1MM cap hit in 2018.

Following four seasons with the Packers, the 28-year-old has spent the past two years with the Chargers organization. After serving as a backup for most of his tenure in Green Bay, the former second-round pick has established himself as one of the top cornerbacks in the league during his time in San Diego and Los Angeles.

Since joining the organization, Hayward has earned a pair of Pro Bowl births and second-team All-Pro nods, and he’s collected 11 interceptions through two seasons. Pro Football Focus was particularly fond of Hayward’s performance in 2017, ranking him first among 120 eligible cornerbacks.

Free agent left tackle Russell Okung has an offer in hand from the Steelers, according to Jeremy Fowler of ESPN.com (Twitter link), while Bob Condotta of the Seattle Times reports (Twitter link) that Okung has no other visits planned at this time. Okung is just one of a few offensive tackles whom Pittsburgh has either met with or plans to meet with, including Ryan Harris and Chris Hairston. Kelvin Beachum, the Steelers’ left tackle for the past few seasons, remains unsigned, and is taking visits with other clubs.

2:53pm: The Chargers have agreed to terms with free agent cornerback Casey Hayward, according to Rand Getlin of NFL.com (Twitter link). Hayward will sign a three-year, $15.3MM deal, Ian Rapoport of NFL.com tweets. 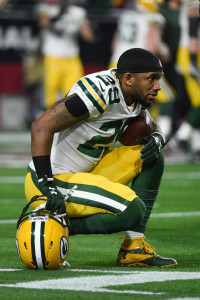 The 26-year-old Hayward had spent the entirety of his four-year career with the Packers, but 2015 was his first season a full-time starter. Hayward started 11 games, playing 87% of Green Bay’s defensive snaps, and while he didn’t post any interceptions, he did defense six passes, and graded as the league’s No. 16 corner according to Pro Football Focus.

In San Diego, Hayward will join an impressive group of corners that includes Brandon Flowers and Jason Verrett, and while Hayward has shown that he can play on the outside, he’ll likely line up in the slot — where’s he proven to be one the NFL’s truly elite defenders — with the Chargers. The signing of Hayward could be an indication that San Diego is bracing to lose fellow corner Patrick Robinson, who is also an unrestricted free agent, and seems unlikely to return to the Chargers as what would now be their fourth corner.

The Chargers have been relatively active during the free agent period — in the secondary alone, the club also added former Colts safety Dwight Lowery in addition to Hayward. San Diego got stronger on its defensive line with the addition of Brandon Mebane, and on the offensive side of the ball, re-signed veteran tight end Antonio Gates and brought in former Browns wide receiver Travis Benjamin.

Green Bay, meanwhile, will rely on Sam Shields, Damarious Randall, and Quinten Rollins to headline their group of corners for the foreseeable future. The Packers have a history of re-signing their own internal free agents, so it’s a little surprising that they weren’t able to reach an agreement with Hayward, who was not only drafted and developed by Green Bay, but signed for a very reasonable annual value of $5.1MM.

Hayward ranked as PFR’s No. 29 overall free agent, and the No. 4 corner on the market. The options listed ahead of Hayward — Janoris Jenkins, Sean Smith, and Prince Amukamara — have all reached new agreements, leaving Brandon Boykin, Leon Hall, and the aforementioned Robinson as the best remaining cornerbacks available.

Ron Rivera‘s path to the Panthers emerged when he and Lovie Smith ended a contentious relationship in three seasons working together in Chicago. The former Bears coach didn’t renew the former Bears defensive coordinator’s contract after the duo helped the Bears to Super Bowl XLI during the 2006 season, largely due to philosophical and personal differences, Austin Murphy of SI.com reports.

Smith preferred then-Buccaneers assistant head coach Rod Marinelli for the job upon being hired as Bears coach in 2004, but, per Murphy, Rivera was mandated by then-Chicago GM Jerry Angelo.

The former Bears player under blitz-happy Buddy Ryan, Rivera wanted a blitz-heavy scheme, whereas Smith was a Tampa-2 proponent. Murphy also asserts Rivera’s eight interviews for head-coaching positions while employed as Bears DC were potentially seen as disloyal by Smith.

When Rivera became the Chargers’ linebackers coach in 2007 after Smith denied him a fourth season running the Bears’ defense, he and Smith were on bad terms, a Bears source told Murphy. The 54-year-old Rivera served three years as San Diego’s DC before accepting Carolina’s top coaching job.

Here are some more items from the NFC North on the eve of Super Bowl 50.