The 53-man roster deadline isn’t until Saturday, but the Dolphins are getting ahead of the game. On Tuesday, the Dolphins released tackle Jordan Mills and tight end Clive Walford with injury settlements. The club also cut defensive tackle Akeem Spence and waived/injured linebacker Chase Allen.

Mills, a free agent acquisition, was disappointing in minicamp and was leapfrogged at right tackle by Jesse Davis. The Dolphins gave him a shot at redemption in training camp, but he was unable to regain his footing.

Walford was most recently with the Jets, but New York decided to non-tender him earlier this month, leading him to the Fins. He had two stints with the Jets and one stint with the Colts in 2018, appearing in only a single game. Walford showed some promise during his first two years in the league, hauling in 61 receptions for 688 yards and six scores across the 2015-16 seasons with the Raiders.

The Dolphins placed linebacker Chase Allen on injured reserve, according to a team announcement. To fill his spot, the club re-signed safety Maurice Smith. 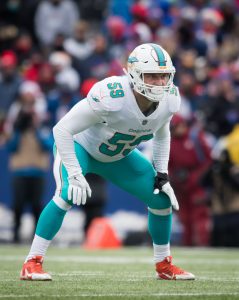 Allen played through a foot injury against the Bears and it’s possible that he aggravated the issue while on the field. While he wasn’t a star player in Miami, he was a special teams staple and his hard-nosed play will be missed. It’s not immediately clear whether Allen is a candidate to return later this year or if this is a certain season-ender.

Despite their bad luck when it comes to health, the Dolphins boast a 4-2 record heading into this week’s contest against the Lions.