Josh Keyes is back with the Texans. ESPN’s Field Yates reports (via Twitter) that the linebacker has signed with Houston. 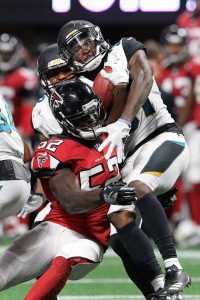 The 25-year-old spent the entire preseason with the Texans, compiling 23 tackles in four games. However, the Boston College product was cut prior to the regular season. He had a brief stint with the Redskins before re-signing with the Texans. He proceeded to compile five tackles in three games with Houston before being waived again in mid-November.

Keyes has appeared in 25 career games, including a career-high 10 games last season with the Browns and Chargers. The 2015 undrafted free agent has also had stints with the Buccaneers, Chiefs and Falcons.

The Texans could surely use some reinforcement at linebacker, especially with a trio of players (Brennan Scarlett, Dylan Cole, and Brian Peters) sitting on the injured reserve. Keyes will likely slide in behind Whitney Mercilus, Jadeveon Clowney, Duke Ejiofor, and Peter Kalambayi on the team’s outside linebacker depth chart.