Veteran receiver Jordan Matthews is looking for a new team yet again. Matthews was released by the 49ers earlier today, the team announced. San Francisco needed the roster spot for LS Kyle Nelson, who they activated from his suspension.

Matthews signed a one-year, $1.8MM deal with a $300K signing bonus earlier this offseason, but was released at final cuts. After Jalen Hurd was placed on injured reserve a few weeks ago, the 49ers re-signed Matthews. The Vanderbilt product is approaching journeyman status, as he’s been with four team in just the past three years. Originally drafted by Philly in the second-round back in 2014, Matthews had some very productive years with the Eagles. He got traded to the Bills, and then injuries started to pile up.

After getting released by San Fran right before the start of the season he had workouts with the Vikings and Saints, so maybe he can latch on with one of those teams. Still only 27, he should be able to resurface at some point soon and he could get brought back by the 49ers.

After rejoining the Eagles last year, he had 20 catches for 300 yards and two touchdowns in 15 games. Nelson was suspended ten games for PEDs toward the end of last season, but the team clearly never lost confidence in their long-snapper. Back in March, they signed him to a four-year extension.

The 49ers have signed long snapper Kyle Nelson to a four-year extension through 2022, as Field Yates of ESPN.com tweets. Nelson still has six games left on a ten-game suspension handed out last December, so he won’t actually play under the new deal until late October or early November.

Nelson was suspended ten games for violating the league’s policy on performance-enhancing substances late last year. The length of the suspension indicates that it was the second PED ban of Nelson’s career.

The 32-year-old (33 in October) has spent the past five seasons in San Francisco, appearing in every single game for the organization. Before that, Nelson appeared in games for the Chargers and Redskins.

Kyle Nelson‘s season is over. ESPN’s Field Yates reports (via Twitter) that the 49ers long snapper has been suspended 10 games. The team announced that Nelson was suspended for violating the league’s policy on performance-enhancing substances. The 10-game van would seemingly indicate that this is the veteran’s second violation. 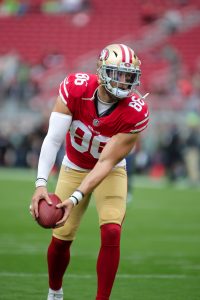 “I have been made aware by the NFL that I tested positive for a banned substance, and as a result will be suspended,” Nelson said in a statement. “I have been taking the same supplements for my entire time with the 49ers, while undergoing often simultaneous testing by the NFL with no issues. I do not deviate from my nutrition routine, and I would never knowingly take a banned substance. I am currently having the supplements tested, and I hope to uncover the cause of the positive test. When the product is identified I fully intend to seek legal action against the manufacturer to protect against this happening to other players in the future.”

The 32-year-old has spent the past four-plus seasons in San Francisco, appearing in every single game for the organization. The suspension could actually spell the end of the veteran’s tenure with the 49ers, as Nelson is set to become a free agent this offseason.

Since he’ll be forced to sit out the first six games of the 2019 campaign, it’s unlikely the 49ers will carry two players at the position for more than a month. In fact, it’s unlikely Nelson will be able to snag a new gig with any team before the start of the regular season. However, the long snapper will be eligible to participate in all offseason and preseason practices/games.

Considering Nelson’s reliability, it was a bit odd to see the 49ers audition a number of long snappers last week. That grouping was headlined by veteran Jon Condo, and it also included Tanner Carew, Lucas Gravelle, Colin Holba, and Taybor Pepper (via Matt Maiocco NBC Sports Bay Area on Twitter). The workouts now make a lot more sense, as the team will need to add a long snapper for the final stretch of the season.

The NFC West brought multiple headline-worthy news items Friday – the Seahawks’ extension of Marshawn Lynch and a possible contract restructuring for the Cardinals‘ Carson Palmer, for instance – but not every transaction includes household names. The Seahawks’ and Cardinals’ division rivals, the 49ers and Rams, proved as much Friday.

Here are a few of today’s minor transactions from around the NFL:

The Redskins have signed tight end Mike Caussin, recently released by the Bills, and waived long-snapper Kyle Nelson, per Adam Caplan (via Twitter). Caussin (6-5, 243) entered the league as an undrafted free agent in 2010. He played in six games, catching five balls for 41 yards for the Bills in 2011, the last time he appeared in a game. He missed the 2012 season because of a torn ACL and was sidelined by a hip injury in 2013.