“I feel good,” Coleman said. “Still working, still trying to get my range of motion back. Just listening to the doctors and trying to get back…It’s weak. I’m not all the way there.

“I’m still working with the doctors and see what they tell me, listening to them and see how I feel next week…I’m going to try my best to get out there and play. This is the Super Bowl. I don’t want to sit out for that.”

Coleman also provided some more details on the injury, noting that his shoulder was out of its socket for nearly 30 minutes. The 26-year-old said the pain was so intense that he couldn’t walk, requiring the use of a cart. The running back also noted that he’d prefer to play without any type of harness, as he predictably doesn’t want his movements to be restricted in anyway.

While Coleman is a major part of the 49ers offense, the team is lucky to have incredible depth at the position. While Raheem Mostert and Matt Breida out-gained Coleman on the ground this year, the former Falcon still rushed for 544 yards and six touchdowns.

Tevin Coleman left the NFC championship game early, but the 49ers expect he will be ready to play in Super Bowl LIV.

Kyle Shanahan described the running back’s dislocated shoulder as being of the Lethal Weapon variety, with staffers able to pop Coleman’s ailing shoulder back into place (via Matt Barrows of The Athletic, on Twitter). While this process was quite painful for Lethal Weapon 2-era Martin Riggs without the threat of any tackling, Shanahan expects Coleman to have a “good chance” to suit up for his second Super Bowl.

The 49ers have thrived on the ground despite their highest-paid running back, Jerick McKinnon, missing a second straight season. While Raheem Mostert and Matt Breida out-gained Coleman on the ground this year, the former Falcon rushed for 544 yards and six touchdowns this season. He returned from a high ankle sprain earlier this season but missed much of the 49ers’ historically dominant rushing day Sunday.

Mostert’s 220 rushing yards rank second in NFL playoff history, and Breida averaged 5.1 yards per carry during the regular season. San Francisco’s second-ranked rush offense may have the option of all three backs facing the Chiefs, however. Coleman gained 35 scrimmage yards and caught a touchdown pass in Super Bowl LI.

49ers running back Tevin Coleman suffered a somewhat serious injury during his team’s win over the Buccaneers yesterday. Fortunately, it shouldn’t keep him on the shelf for all that long.

ESPN’s Nick Wagoner tweets that Coleman suffered a high ankle sprain yesterday, but head coach Kyle Shanahan said a trip to the IR wasn’t a possibility. The 26-year-old will be out for next weekend’s game in Cincinnati, and the team will then treat the injury as week-to-week.

Shanahan also revealed that Coleman was injured during the first play of the game, and the ailment got worse as he remained in the contest. The running back was ultimately pulled at halftime after having compiled 23 rushing yards on six carries. He also hauled in two receptions for 33 yards.

Coleman was making his regular-season debut for the 49ers after having inked a two-year, $10MM deal with the team this past offseason. The running back had spent the first four seasons of his career with the Falcons, including a 2018 campaign where he compiled 1,076 yards on offense.

With Coleman joining Jerick McKinnon on the sideline, the 49ers are suddenly looking thin at the position. The team will likely lean on Matt Breida until Coleman returns, although the former undrafted free agent was underwhelming yesterday (37 rushing yards on 15 carries). Raheem Mostert is the only other running back on the roster, and Shanahan implied yesterday that Jeff Wilson Jr. could be promoted from the practice squad.

Von Miller turned 30 this offseason and will soon start his ninth NFL season, but it doesn’t look like the Broncos will need to consider making plans for a near-future Miller retirement. Denver’s all-time sack leader said (via USA Today’s Lila Bromberg) he wants to play long enough to make a run at Bruce Smith‘s NFL record. That will be quite difficult, with Miller (98 sacks) having averaged 12.25 sacks per season (a figure weighed down by his 2013 suspension-shortened slate) and Smith having recorded 200 during his 19-year career. Miller would need to average 10.2 sacks over the next 10 seasons to get there. However, Miller sits second among active NFLers in sacks — trailing only Terrell Suggs (132). While the odds are against him eclipsing the Smith standard that has stood for 16 years, it is notable the likely Hall of Fame-bound pass rusher plans on playing for several more seasons. Three seasons remain on Miller’s six-year, $114.1MM contract.

Here’s the latest from the West divisions, shifting to the NFC West:

Eagles top personnel executive Howie Roseman‘s track record with respect to expenditures for, and evaluation of, running backs is not a strong one, which we discussed a bit last week. Jeff McLane of the Philadelphia Inquirer, in reviewing that track record again, said that the Eagles did go after a running back in the first wave of free agency this year, but for some reason they fell short in their pursuit. 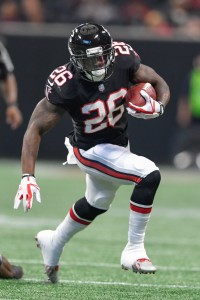 McLane reports that Philadelphia had targeted former Falcons running back Tevin Coleman, whom running backs coach Duce Staley said was the best back on the market (even though the market also included Le’Veon Bell and Mark Ingram). Coleman, though, ultimately signed a modest two-year pact with the 49ers, and McLane is unsure as to why Roseman was unable to close the deal. Coleman may have preferred to reunite with Kyle Shanahan, the former Falcons OC who is now San Francisco’s head coach, but Roseman had the money and the playing time opportunity to entice Coleman.

Now, Philadelphia still needs to upgrade the position, which is probably the weakest on the roster. McLane suggests that the club could look to trade for the Bears’ Jordan Howard or the Browns’ Duke Johnson, though he questions how willing Roseman would be to give up even a late-round draft pick for backs that are available for a reason (plus, while the team does not necessarily need a lead runner in the traditional sense, Johnson is an imperfect fit given that he is better as a receiver than as a running back).

Similarly, McLane does not believe the remaining backs on the free agent market — currently headed by T.J. Yeldon and Isaiah Crowell — are legitimate targets for Roseman. He thinks the Eagles, who have two picks in the second round and two in the fourth, could use one of those selections on an RB, especially given that this year’s draft class of running backs offers plenty of talent in the middle rounds. But given Roseman’s past, even that is far from a sure thing.

The 49ers have signed running back Tevin Coleman to a two-year, $10MM deal, according to Adam Schefter of ESPN.com (Twitter link).

San Francisco was surprisingly in the running back market even after inking Jerick McKinnon to a four-year, $30MM contract last offseason. McKinnon, of course, missed the entire 2018 season after tearing his ACL, and it wouldn’t result in a significant financial hit for the 49ers to part ways with him. SF reportedly also pursued Le’Veon Bell before he signed with the Jets.

For Coleman, a $5MM annual value is the disappointing result of a disappointing campaign. Coleman witnessed the Falcons give starting running back Devonta Freeman an $8.25MM annual average on a 2017 extension, all but ensuring Coleman wouldn’t be back in Atlanta when his contract expired. When Freeman went down in 2018, Coleman wasn’t able to capitalize with his expanded work load on the ground. While he managed 4.8 yards per carry, Coleman was also among the least efficient backs in the league, per Football Outsiders‘ metrics.

Where Coleman does excel is in the passing game. He’s posted at least 25 receptions in each of the past three seasons, while FO ranked him as a top-20 back in terms of receiving efficiency. Matt Breida, who took over as the 49ers’ starting back once McKinnon went down, isn’t much of a pass-catcher, so Coleman would complement him well. But if Coleman is taking over as San Francisco’s receiving back, McKinnon might not have a role (or a job).

“Tevin’s going to do well, wherever he is,” he said.

The stumble of words just goes to confirm what many have expected: That Coleman will not be back with the Falcons in 2019. Projected as the No. 2 free agent running back behind Le’Veon Bell, the Indiana product is due for a big payday. That wasn’t likely to come from the Falcons, who already have the league’s third-highest-paid running back on the roster in Devonta Freeman.

The Falcons also have a capable backup ready to take Coleman’s role in Ito Smith, who gained 315 yards and four touchdowns as a rookie. While it won’t be with the Falcons, Coleman is sure to command a primary back role with another team after showcasing a dual-threat skill set in his time in Atlanta.

Here’s a look at the NFC South: