Andrew Norwell is staying put. On Monday, the veteran guard agreed to restructure his existing contract into a one-year deal with $9MM fully guaranteed (Twitter link via ESPN.com’s Adam Schefter). Through bonuses, Norwell can earn up to $12MM in 2021. 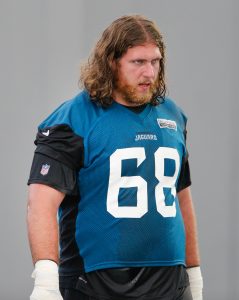 Norwell earned first-team All-Pro honors with the Panthers, paving the way to a five-year, $66.5MM Jaguars deal in 2018. At the time, the deal made him the highest paid guard in the league.

He hasn’t reprised that performance yet, leading the Jaguars to shop him this offseason. There were no takers for the remainder of that deal, so the two sides went to the bargaining table. Norwell will give the Jaguars some relief and, in exchange, he’ll get to hit the open market one year earlier.

Norwell was limited to eleven games in 2018 as he dealt with an ankle injury. On the plus side, he’s been mostly healthy over the last two years. He played/started 16 games in 2019 and missed only three games last year.

The restructuring takes one item off of the Jaguars’ to-do list, freeing them to shop for other needs, including running back.

A pair of veteran offensive linemen are apparently on the trade block, but it’s sounding like there may not be any takers. Jason La Canfora is hearing that the Jaguars are shopping offensive guard Andrew Norwell, while the Giants are trying to move offensive guard Kevin Zeitler (Twitter link). The reporter adds that rival teams believe these two linemen will ultimately be released, at which time they’ll “generate significant interest” around the NFL.

Norwell parlayed his first-team All-Pro nod with the Panthers into a five-year, $66.5MM deal with the Jaguars in 2018. While the veteran hasn’t matched his production from that standout campaign, he’s still been a dependable presence on Jacksonville’s line over the past three years. The organization’s decision to shop (and, presumably, eventually move on from) Norwell is mostly financial; the veteran has a cap hit of $15MM in 2021 and $16MM in 2022, and cutting him would leave manageable dead cap hits of $6MM in 2021 and $3MM in 2022.

Zeitler, a former first-round pick, spent the first five seasons of his career with the Bengals, including a 2012 campaign where he earned All-Rookie Team honors from the Pro Football Writers Association. He inked a five-year, $60MM deal with the Browns in 2017, making him the highest-paid guard in the NFL. He spent a pair of seasons in Cleveland before getting dealt to the Giants as a part of the Odell Beckham trade.

The 30-year-old has played the past two seasons in New York, appearing in all but one game. The veteran has a $14.5MM cap hit in the final year of his contract, and the Giants would be left with only $2.5MM in dead cap if they decided to cut him.

The Jaguars will be without their top offensive lineman for the rest of the season. They placed center Brandon Linder on IR Wednesday. 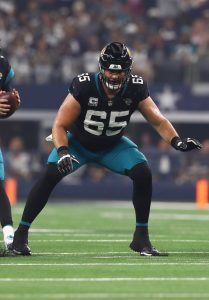 Linder did not play in Jacksonville’s loss to Tennessee, with an ankle injury sidelining the veteran blocker. He will join guard Andrew Norwell on the Jags’ IR list. The Jags did designate Norwell to return from IR Wednesday, however.

Pro Football Focus’ No. 3-ranked center, Linder has missed some time this season. He has suited up for nine games in his sixth NFL slate but will now be shut down. The Jaguars have Linder under contract through 2022. He is due a non-guaranteed $8MM base salary next season.

Linder will now see a season capped at nine games for the second time in three years. A knee injury sidelined him midway through the 2018 campaign. The 28-year-old snapper has only played one 16-game season (2019) in his career.

While the Jaguars are 1-12 and reside as the only non-Jets team with a realistic chance of securing the No. 1 overall pick (widely expected to be the Trevor Lawrence slot), rookie UDFA running back James Robinson has already cleared 1,000 yards and sits third in rushing yards this season. Linder certainly played a key part in Robinson’s breakout and should be expected to reprise that role next year.

Jaguars coach Doug Marrone says Josh Allen‘s knee injury will keep him out of action for a while (Twitter link via ESPN.com’s Michael DiRocco). Allen avoided ligament damage, but he may be placed on injured reserve later this week. 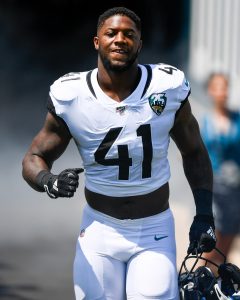 Allen went down in the third quarter against the Steelers and had to be escorted over to the medical tent. Now that the Jaguars are 1-9, they might not be in much of a rush to get Allen back on the field. If Allen doesn’t return this year, his season will end with 13 stops and 2.5 sacks across eight games. Those numbers don’t necessarily jump off of the page, but the advanced metrics at Pro Football Focus frame Allen as a top-30 edge rusher in the NFL.

Meanwhile, guard Andrew Norwell is considered week-to-week with an arm injury (Twitter link via NFL.com’s Ian Rapoport). He’s a no-go for this week’s game against the Browns, who will be without star edge rusher Myles Garrett.

The Jaguars haven’t won since their season opener, putting them just behind the Jets in the race to the bottom.

Andrew Norwell has reworked his deal. ESPN’s Field Yates reports (via Twitter) that the Jaguars agreed to a renegotiated contracts with the offensive lineman.

Previously, Norwell was on the books for $11.5MM in non-guaranteed money next season. Now, the offensive guard will earn $9MM guaranteed, and he has an additional $2.5M in realistic incentives. The 28-year-old gets the security he’s presumably seeking, while the Jaguars have the opportunity to save a chunk of cash.

Norwell joined Jacksonville back in 2018, signing a five-year, $66.5MM contract ($30MM guaranteed). His $13.3MM average annual value currently ranks fifth among offensive guards, although he led the position when he initially signed his contract.

The veteran was limited to 11 games in 2018 as he dealt with an ankle injury. He returned fully healthy in 2019 and managed to start all 16 games for the Jaguars.

The ankle injury Andrew Norwell suffered Sunday will result in an IR stay for the veteran guard. His first Jaguars season will come to an end.

Norwell is now set to rehab a sprained ankle and will miss the Jags’ final five games. Jacksonville made the 2017 first-team a $13MM-per-year player this offseason.

This marks the fourth starting offensive lineman the Jags have sent to IR this season. Norwell follows Cam Robinson, Brandon Linder and part-time starter Josh Wells to the season-ending injury list. The former Panthers guard started all 11 games this season.

Jacksonville is now 3-8 and has fired its offensive coordinator and demoted its longtime starting quarterback today. While significant changes may be in store for the Jags this offseason — though, Doug Marrone is believed to be safe — Norwell will almost certainly be back in Jacksonville’s starting lineup next season.

The Jaguars will be without guard Andrew Norwell for a bit. Norwell is believed to have a sprained ankle that is expected to sideline him for “a few weeks”, a source tells Adam Schefter of ESPN.com (on Twitter).

Norwell will undergo a full MRI on Monday to determine the full extent of his injury. No matter what, it sounds like Norwell will miss multiple games, though it won’t have a major impact on the Jaguars’ season one way or another.

After Sunday’s loss to the Bills, the Jaguars dropped to 3-8 and officially took themselves out of playoff contention. They also dropped offensive coordinator Nathaniel Hackett, which may be the first of several changes to go down in Jacksonville.

Norwell joined the Jaguars in March on a five-year, $66.5MM deal with $30MM fully guaranteed at signing. With a salary of $13.3MM per year, Norwell stands as the highest-paid left guard in the NFL.

As underscored by the advanced metrics at Pro Football Focus, Norwell hasn’t been his usual self in 2018. PFF ranked Norwell as the third-best guard in the league last year for his work with the Panthers. So far this year, the 27-year-old is 27th among guards in the NFL.